Description of the Washington Monument

The Washington Memorial is a famous monument to the first president of the United States and one of the founding fathers of the American nation. It is a huge white granite stele that rises in the center of the capital. This significant structure looks like George Washington, a great personality who left an indelible mark on world history.

Where is the memorial located?

The landmark is built in the historic part of the city, in the National Mall National Park.

It will not be difficult to find it, as the structure is set in the heart of the capital. 900 meters north of it is the White House, and 2.2 km away is the Capitol.

The stele is primarily a memorial to America’s 1st president. It is also a symbol of respect and recognition from the American people to the man who made an invaluable contribution to the history of modern America, who liberated the country from colonizers and fought against slavery. 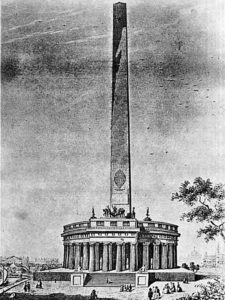 The monument was erected between 1848 and 1884. However, the process of its creation began much earlier-in 1832, on the 100th anniversary of George Washington’s birth. In that year, at the initiative of the city’s residents, the Society for the Monument was founded and began collecting donations for the construction.

In the mid-1930s the Society was able to raise $28,000. The design of the memorial was entrusted to Robert Mills of South Carolina. The architect originally wanted to build a grandiose colonnade around the monument and erect several statues. However, the plan he developed did not satisfy the public, as it would have taken $1,000,000 to bring Mills’ architectural vision to fruition. Therefore, donations continued to be collected until 1848, when the amount needed to begin construction was raised.

Due to constant cash shortages and problems with collecting donations, only the stele was erected, with no statues or circular colonnade. Despite this, it is still considered one of the grandest structures in the world. 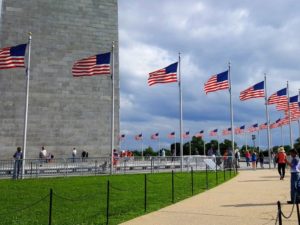 The monument to George Washington was erected in the Egyptian style. The main construction material is granite, the facing is white Maryland marble. The top is in the form of a four-sided glass pyramid. The base is surrounded by 50 flags representing each U.S. state.

Inside the stele is hollow, without any decoration or facing. On the 1st floor is a small lobby with an elevator and access to the stairs.

General information about the landmark:

The obelisk of the first President of the USA is one of the highest stone structures in the world. There are 897 steps leading to its top; everyone can climb it. A visit to the site is free. Despite this, tourists still need to get a ticket that gives permission to enter the site. 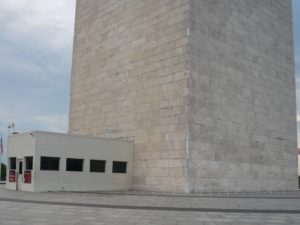 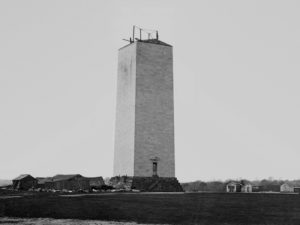 There are 188 original plaques that were received by the Washington Monument Society from various world sponsors and from each of the nation’s states. Among them:

A time capsule is placed at the base of the memorial. It contains a message from the Presidents of the United States, the Bible, the text of the Constitution, etc.

At the beginning of the construction of the monument, a memorial plaque was donated by Pope Pius IX for its facing. Unfortunately, it was stolen and destroyed by members of the anti-Catholic “Know Nothing” society, created by the American nationalist party.

The complex was also supposed to include a stone presented to the capital of the United States from the Ryukyu Kingdom, which was independent of Japan. But the gift never made it to Washington. 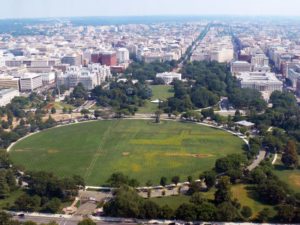 If you want, you can climb to the top of the stele, which is equipped with an observation deck with eight windows overlooking the four corners of the world. A high-speed elevator will take visitors to the top floor in 72 seconds. The glass pyramid that crowns the memorial is also accessible by stairs.

The top of the obelisk, designed in the form of an Egyptian pyramid, offers a panoramic view of the sights of Washington:

On sunny and clear days you can see most of the capital from the observation deck.

READ
Sightseeing in Mexico. Famous and not so famous.

Opening hours are not fixed. Periodically the facility is closed for renovations. The schedule is available on the official website of the attraction. 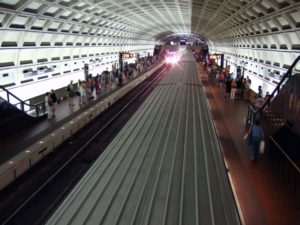 How to get to the obelisk by public transport:

There are no rules for tourists to visit the attraction. Anyone can come here and climb the observation deck if they have a special permit.

George Washington was the first president of the United States of America, a legendary figure and one of the founding fathers of the country. He rightfully holds a place of honor in American history. Such a significant historical figure and a monument should be just as significant. And there it is, the most famous monument to the first president of the United States, the Washington Monument.

George Washington is so famous and revered that he is among the four presidents depicted on Mount Rushmore.

Of course this landmark is located in the heart of the United States in the city of Washington, 2,200 meters west of the Capitol and 900 meters south of the White House. 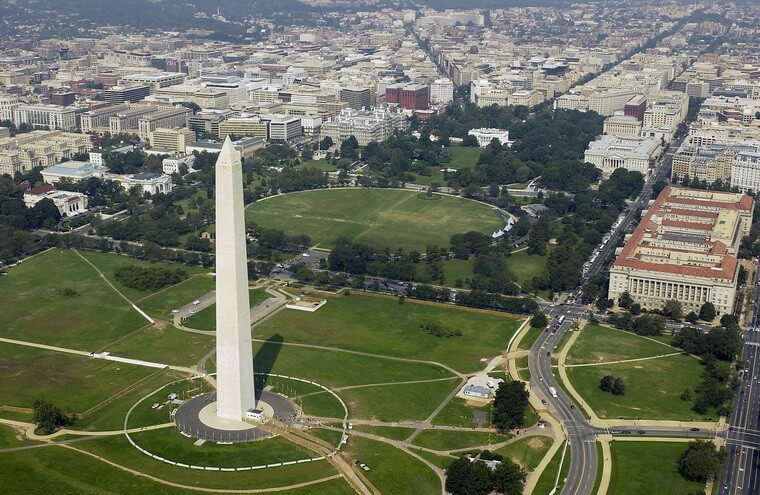 The Washington Monument is a flat, straight, tetrahedral pillar 169.046 meters tall. The upper part of it ends with a four-sided pyramid covered with aluminum.

Today this giant obelisk is visible from almost all points of the American capital. It is surrounded by fifty flagpoles with the flags of the fifty U.S. states. 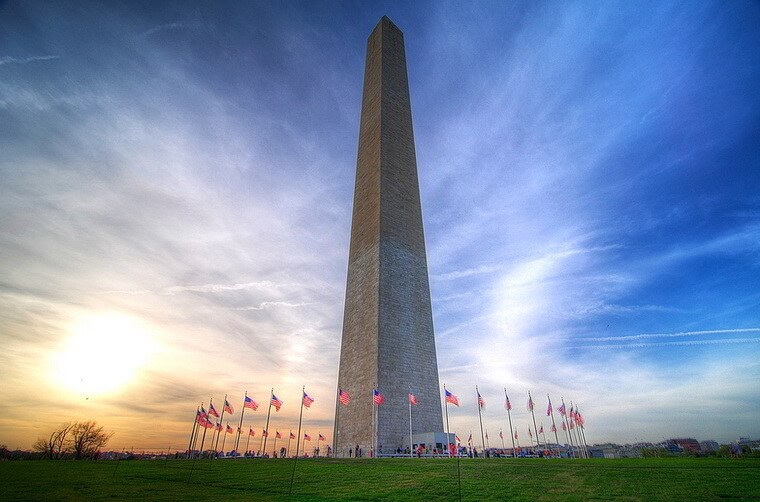 Flags at the monument

The main construction material was white marble from Maryland and Massachusetts, but granite and metal framing elements were also used. In the stone thickness of the obelisk is a staircase of 897 steps. It leads to an observation deck at the top.

There are 193 memorial stones from all 50 states and foreign countries in the walls of the stairwell. The state of Alabama contributed the first stone in 1849. Alaska was the last state to place its stone. In addition, there are stones donated by different people from all over the world, different societies, cities and states. 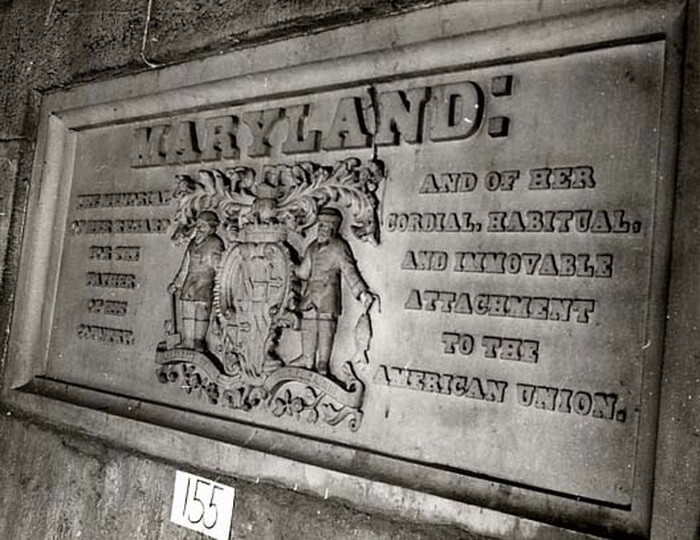 Here, for example, is a stone from the state of Maryland

We recommend reading about the most famous staircase in Rio de Janeiro, the Celaron Staircase. It used tiles from all over the world as the construction material, and only one person worked on this masterpiece all his life.

In addition to the stairs, there is a more modern way to get to the top of the monument – the electric elevator. From the eight windows of the observation deck (two on each side of the world) you can see an incredible panorama of the American capital. The Lincoln Memorial, the Capitol, the White House, and the Jefferson Memorial are all visible from here. In clear weather the visibility from the top of the monument reaches up to 50 kilometers around.

The history of the monument dates back to the centennial of George Washington in 1832. Local residents formed an organization to raise funds to erect the monument.

In a few years they had already raised an impressive amount for those days 28,000 dollars (which is about 1,000,000 modern dollars).

In 1836, architect Robert Mill won a design competition for the Washington Monument. His idea was based on the image of an ancient Egyptian obelisk, enlarged to an incredible height (remember, it’s just over 169 meters). Up until the appearance of the Eiffel Tower in Paris, the Washington Monument was considered the tallest structure on the planet, and now it is the tallest structure made of stone. 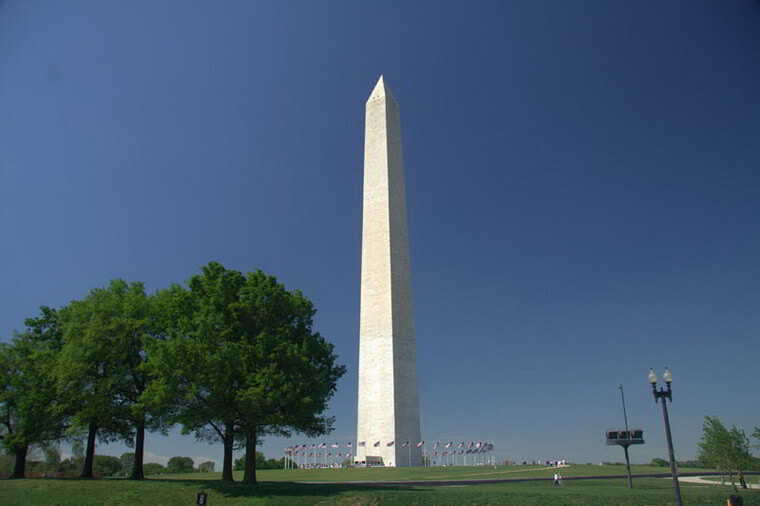 The Washington Monument is the tallest stone structure in the world

Mill’s original design included, in addition to the obelisk, a semicircular colonnade with a rotunda in the spirit of ancient Greek temples. The structure was intended to be a kind of pantheon of America. Thirty niches in the piers between the columns were to be filled with statues of outstanding American figures and heroes of the struggle for independence. The rotunda dome was to be topped by a bronze statue of George Washington in a toga on a chariot of victory. Mill’s design was later revised, and today many consider it fortunate that Mill’s planned rotunda was never built.

The cornerstone of the monument was erected on July 4, 1848, but construction was soon interrupted due to a lack of funds and organizational turmoil. Then the Civil War broke out. It was not until 1876 that work on the monument resumed. Lieutenant Colonel Thomas L. Casey, who led the construction, significantly altered Mills’ original plan, abandoning the colonnade and rotunda entirely and concentrating all his efforts on building the obelisk. The marble for it had to be brought from a different quarry than originally. It is visible today that at about 50 meters high the color of the obelisk changes, marking the border where Mills’ successors began work in 1876.

The monument was consecrated on February 21, 1885 and officially opened on October 9, 1888, nearly 30 years after the architect’s death. 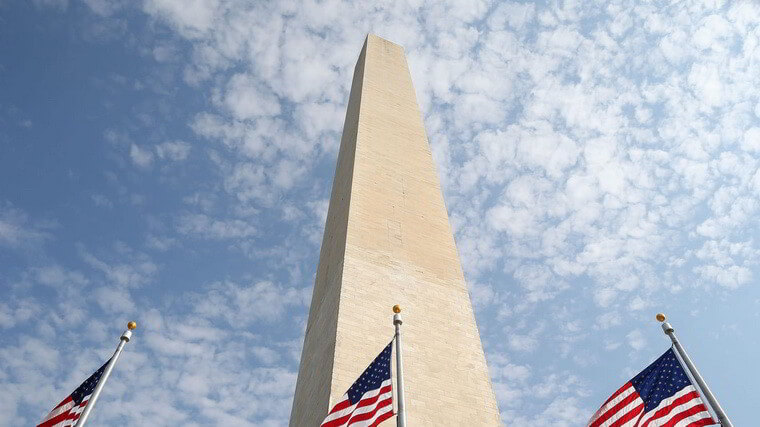