There are not many waterfalls in the Moscow region, the rivers in this region flow along the plain without significant drops, but still there are waterfalls.

Moscow land is full of all kinds of wonders. Here no one and could not think that the local rivers, quietly flowing in its course, can form waterfalls. But, such a phenomenon does take place. Waterfalls of the Moscow region happened thanks to hard rocks and steep slopes. Over time, the rocks are eroded, forming cascades, and on them, as on steps descend jets of water.

Old people say that the places where there are waterfalls, have a healing power, as they accumulate unusual energy.

This is where temples are built and people come here to drink the water or to bathe in it.

This is the most popular tourist waterfall. The waterfall is located where the Nara River takes a bend. The spring got its name for the unusual effect that is obtained when the water falls on the stones. The stream hits, breaks into tiny drops and you can see a rainbow in the light of the sunlight.

Recommended to come to the falls in the winter, then the color picture on the white snow is even more beautiful.

To get to the waterfall is not easy. Though it is located only 45 km from the capital, but first you have to go through the pioneer camp, and then another 20 minutes and cars pivot on an unpaved road, passing through a field.

From there, each group chooses their own path:

The most important thing is to slow down in time and not to fall into the water.

The height of the waterfall is about five meters, the water in the spring is really cold, so do not swim in it at first experience.

There are legends about the healing power of the local water, so the waterfall and the surrounding area have become a place of pilgrimage. For the visitors’ convenience there are medical bathing huts and special rooms where people can change their clothes and rest from the road.

The height of the Gremyachy waterfall is 25 meters. Those wishing to go to its source must overcome the steps of the stairs, but many remain at the bottom, where there is a church of Sergius of Radonezh, completely wooden.

Each stream of the source is attributed a separate healing power, for example, the left stream is intended for women – it treats diseases of the “female” line, as well as promotes pregnancy, the right stream – normalizes the cardiovascular system, the central stream – relieves headaches.

The constant temperature of water here is +4 degrees, and it does not depend on the time of year.

Many small springs are located on the left bank of the river Protva. The banks here are steep, but the nature is incredibly beautiful and full of colors. You can also come to the town of Zheleznodorozhny to watch or to take part in the water slalom competitions.

But the waterfall here is artificial, although it does not make it any less attractive.

All of the waterfalls were discovered by casual travelers. Perhaps readers will also want to visit these places, or even go even deeper into pristine nature to find new waterfalls near Moscow, or discover other wonders previously undiscovered by anyone.

In order to see the beautiful waterfalls, you do not need to travel to the mountains. The real wonders are not far from Moscow, and it is easy to get to them on weekends. We tell you about six natural and man-made waterfalls in the Moscow region.

Waterfalls near Moscow on the map 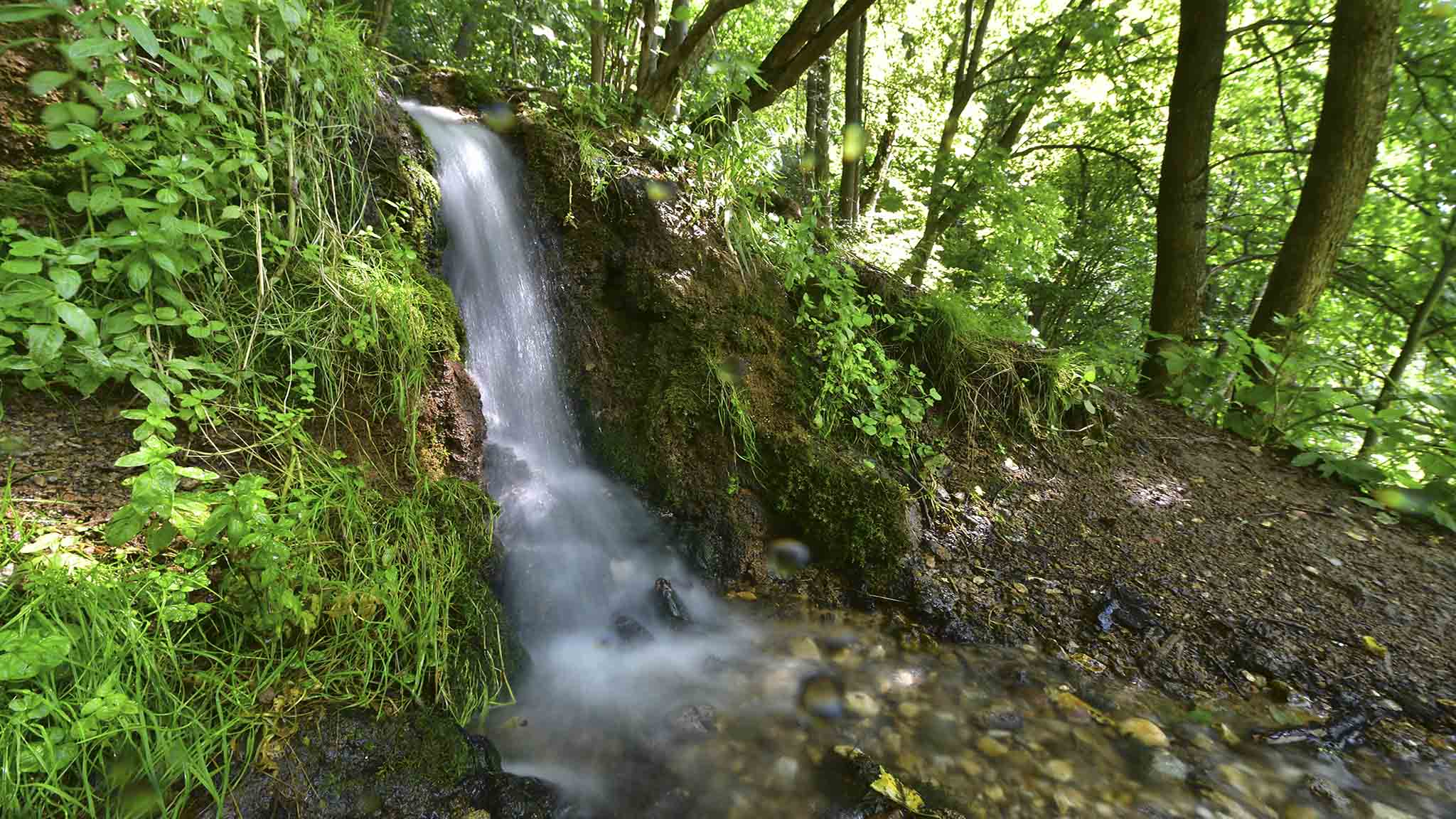 The Raduzhny Waterfall is located on the Nara River, 45 km from Moscow. Photo by: Ivan MAKEYEV

The Nara River is famous for its beautiful banks, karst springs and a waterfall over which there is almost always a rainbow. The slope where the water flows is covered in emerald moss and thick green grass. Nearby there are several more springs. Locals call them “Maiden’s Tears”. Even in the heat the temperature of the water does not rise above +8°C.

The miracle of nature is not always visible, in the summer the waterfall dries up. In rainy weather, the meadow in front of the river turns into a swamp. It is better to plan a trip in winter, when there is no muddy weather.

How to get there: The waterfall is located on the border with Kaluga region. You have to drive 45 km along the Varshavskoe highway, before you get to the village Papino turn right at the sign to the country houses, and then you have to go on unpaved road through the field.

One of the largest waterfalls near Moscow has a height of 20 meters. The famous spring is loved for its delicious clean water and beautiful scenery. Believers call this place Svyatogory. The territory is very well equipped – a special staircase leads to the upper part of the spillway, there is a fonts and a wooden church nearby.

Gremyachy Klyuch was known for a long time, and tourists have been coming to the waterfall since the 1950s. In the post-Soviet years, a legend was born that the spring originated thanks to Sergius of Radonezh, and pilgrims streamed here. It is believed that healing water flows in the spring, which helps get rid of many diseases.

READ
Dudhsagar Falls in Goa, where is it and how to get there

How to get there: the waterfall is situated on the bank of the river Vondiga between the villages Lyapino and Vzglyadnevo of the North Posad district. From Sergiev Posad take bus №28-2, 81, or 120 to the stop “Voronino” and then walk 4 km.

3. Waterfall on the Pekhorka river

Artificial cascades on the right tributary of the Moscow River attract fans of spectacular photographs, fishermen and water tourists. Every year, canoe and kayak rowing slalom competitions are held on the Pekhorka. There is a bridge over the waterfall, and a picturesque park spreads out nearby.

How to get there: in the neighborhood Zheleznodorozhny in Balashikha by train from the Kursk station.

A small and cozy waterfall is one of the natural attractions of the valley of the Oka River. Water flows out of the karst well and falls from a height of 3 m. In winter, beautiful icicles form on the ledges. Nearby are Nicholo Archangel’s church and abandoned manor of princes Vyazemsky, which was built in the late 18th century.

How to get there: Well-trodden path to the waterfall starts from the bus stop “Green Zone” in Pushchino. 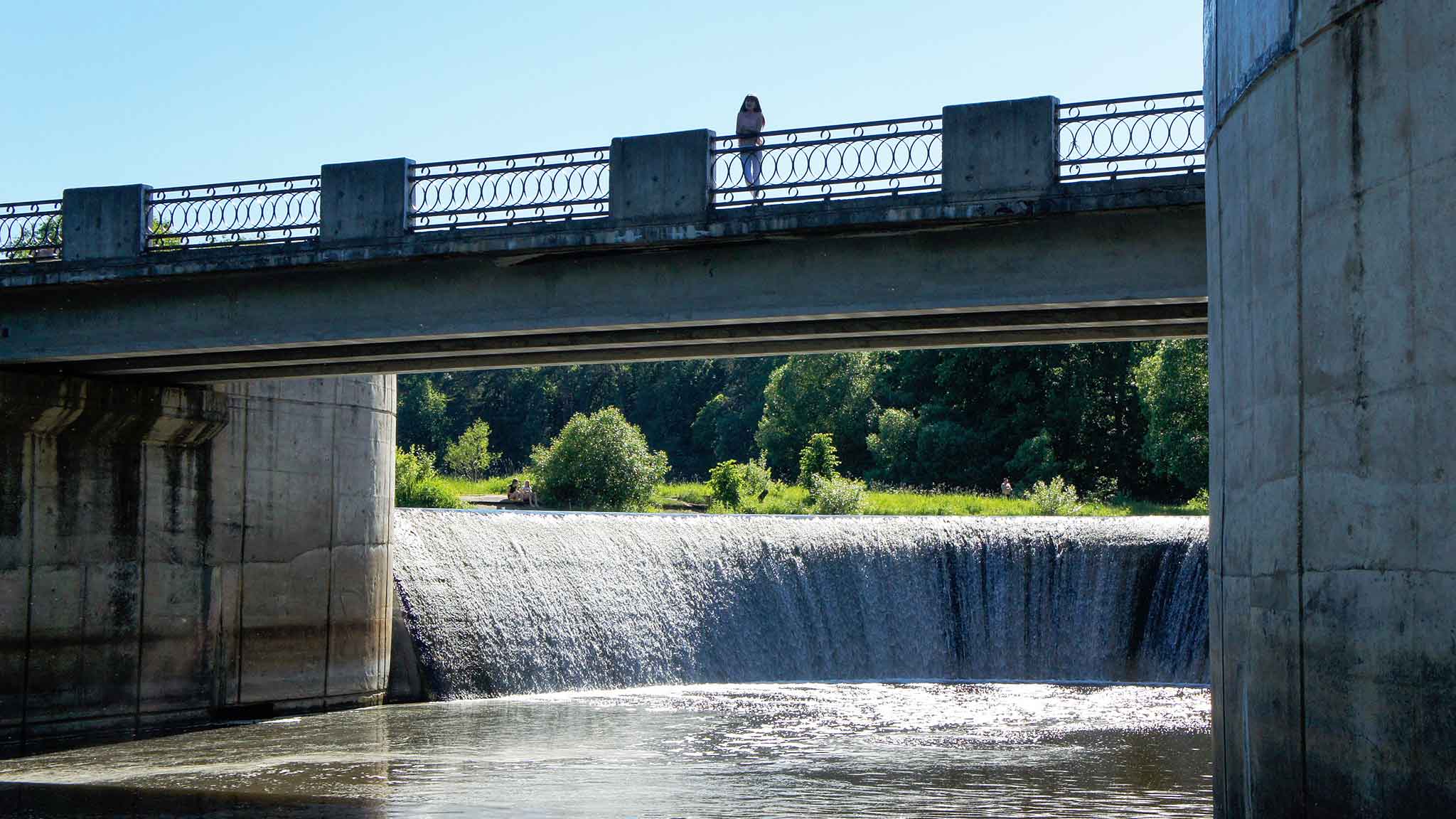 Artificial waterfall formed by the release of water through the dam. Photo: Vasily DANILOV, commons.wikimedia.org

The first rural power plant on the Lama River was built by peasants in 1919. Today you can see a large semi-circular dam on the smooth surface of the pond, from which the water flows down. The artificial waterfall looks especially beautiful from the bridge above Lama.

It is better to come to Yaropolets for a whole day. In the village there is a museum of local lore. It is interesting to see the Goncharovs and Chernyshevs’ estates, to visit the chapel over the grave of Hetman Doroshenko and the monument to the Kremlin cadets.

How to get there: take a train to Volokolamsk station and then take bus №28 or 39 to Yaropolts.

6. The valley of the seven streams. 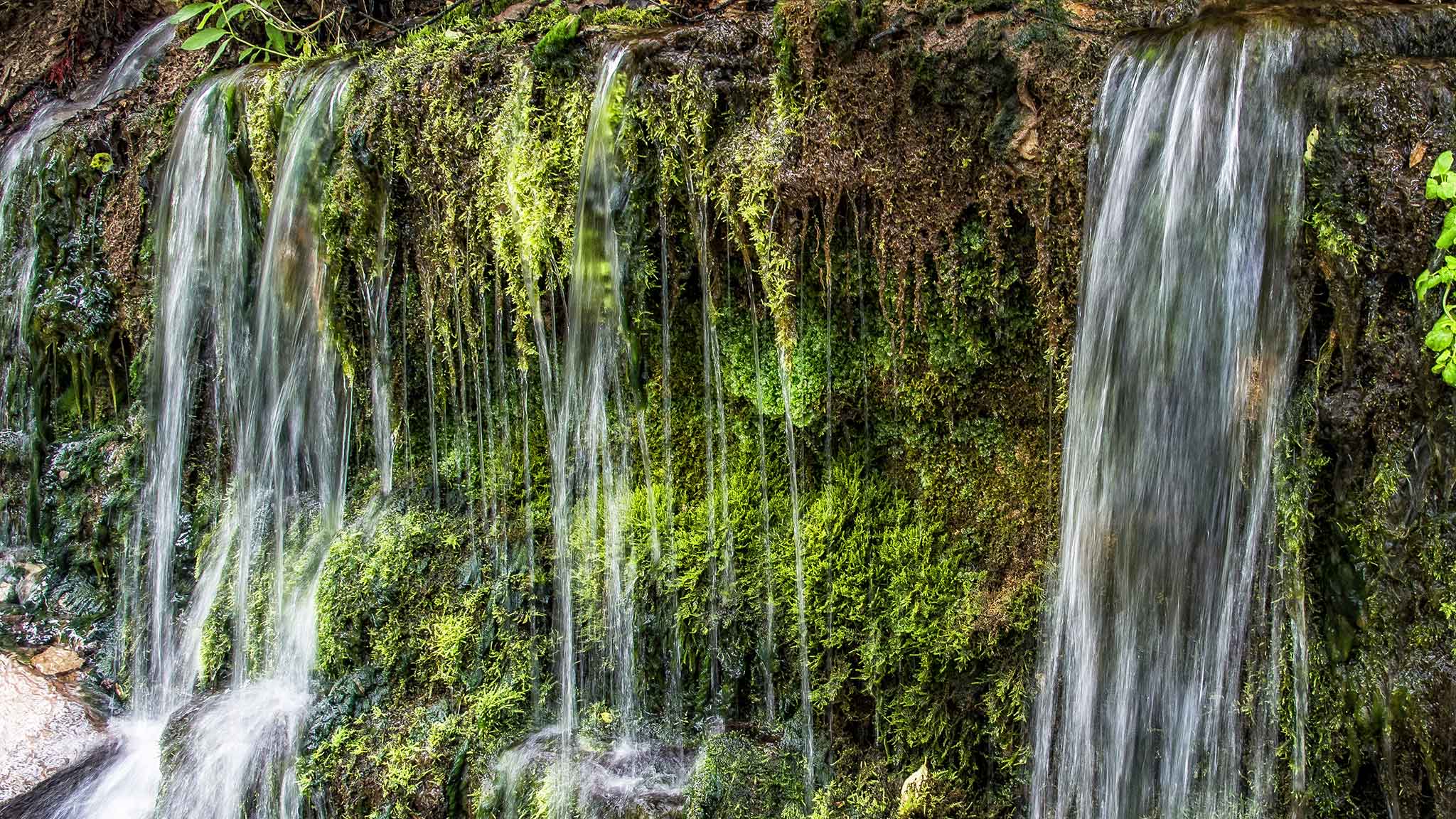 On the banks of the Protva River there are several natural springs with cold water. Clear streams flow down steep limestone terraces and form a cascade of waterfalls up to 5 m high, joining to the river. Protva valley in this place is overgrown with bushes and trees and looks like in a picture of Viktor Vasnetsov “Alyonushka”.

How to get there: the picturesque waterfalls are situated near the village Zolotkovo. The descent to the river begins at the end of the River lane. “Seven streams” do not open immediately, but the noise from them can be heard from afar.