From time to time on our planet, we have sinkholes. Sometimes it is an unfortunate subway line, sometimes the result of excessive mining efforts. But then there are such phenomena of quite natural origin.

Argentina has such sinkholes. In particular, this is Lago Pozo de las Animas or, as the locals call it, “the Well of Souls”. 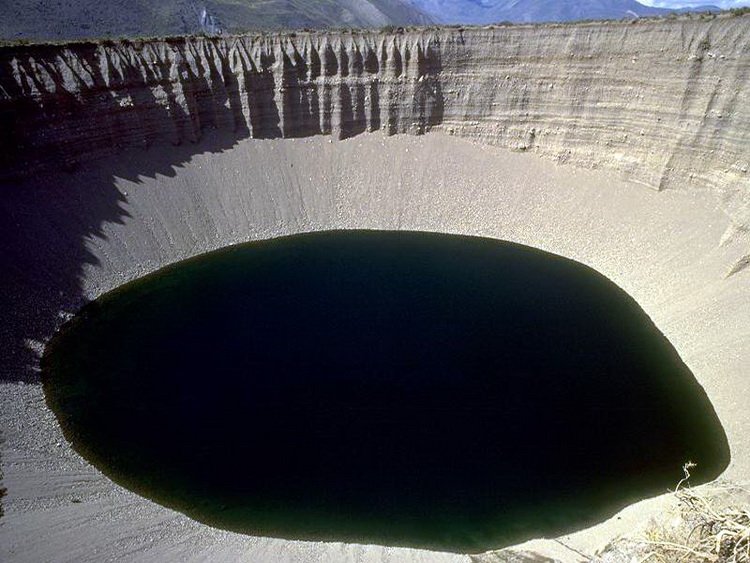 It is located 7 km. west of the village of Los Molies in the province of Mendoza, about 35 kilometers from the Chilean border.

The Well of Souls on the map

The Well of Souls appeared naturally. As a result of gypsum deposits being washed out by groundwater, voids formed in the earth’s crust. The soil eventually collapsed and Argentina was enriched with another landmark. The hole gradually filled with water and was named Lake Pozo de Las Animas (that’s how it appears on maps).

In fact, the Well of Souls is two bodies of water separated by a thin wall of gypsum rock, but the failure is one. The barrier between the lakes is constantly deteriorating, so at some point it will be a single failure and a single body of water. In the meantime, it is customary to divide this landmark into the North and South Wells. 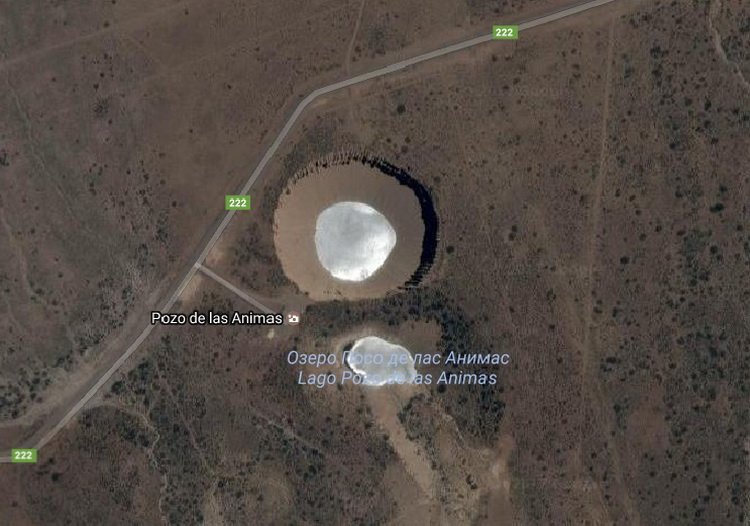 The North looks like a crater from a meteorite fall, it is perfectly round in shape and has steep steep edges. The diameter is about 300 meters and a depth of just over 100 meters. It is highly discouraged to go close to its edges, as they are still crumbling and crumbling. At the bottom of the well there is a lake about 20 meters deep.

The diameter of the South Well is approaching 400 meters, but it looks much smaller than the North. This is due to the fact that its edges are gentle and covered with grass and shrubs. Again, there is a lake at the bottom. The water level in the lakes changes periodically. 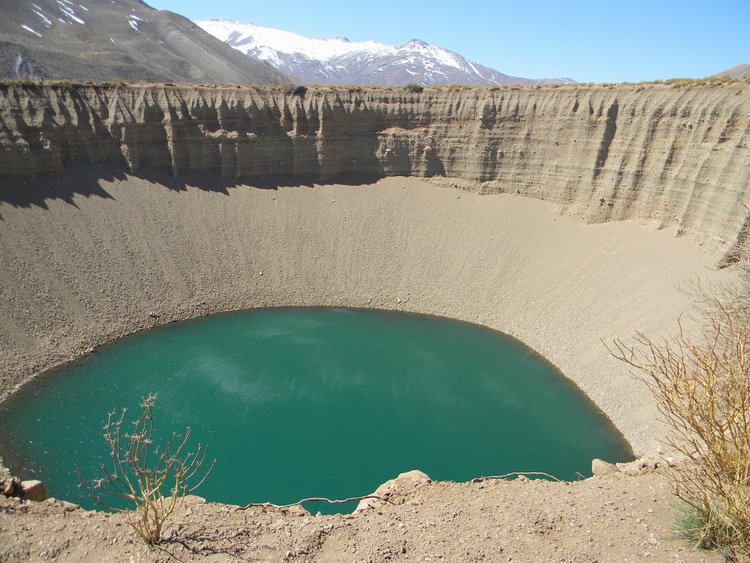 Lacking the third dip, then this landmark can be compared to the multicolored Kelimutu Lakes in Indonesia, which are also much larger in size, and the colors change periodically.

The origin of the name “The Well of Souls” is associated with an old legend. Once upon a time, there were two Indian tribes in this area who feuded with each other. One day one of them was pursuing the other. As night fell, the pursuers lost sight of their enemies. In the morning the Indians decided to continue their pursuit, but they heard terrifying cries and screams from afar. As they made their way across the prairie, they found two large depressions filled with water. And at the bottom their enemies were dying agonizingly. It is not known what caused the deaths, but since then the place has been worshipped as a sacred place and is called the Well of Souls. 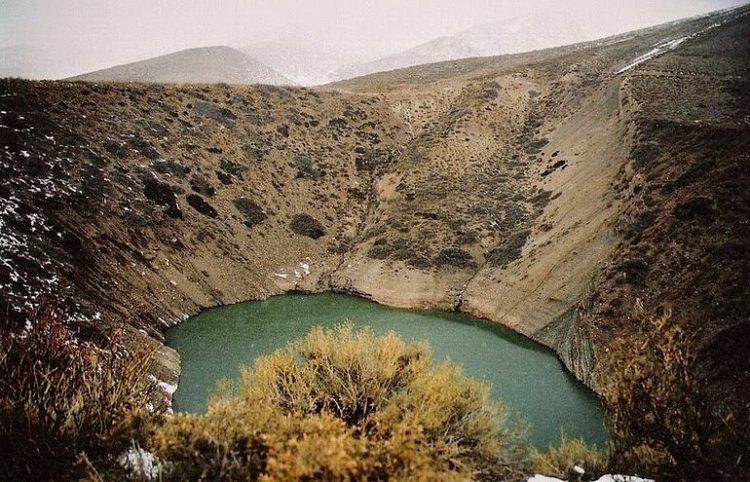 To get to the Well of Souls you can take road number 222 from the village of Los Molies. You can’t miss it – the attraction is only 60 meters from the road. There is a small parking lot for cars, which offers a view of both wells. 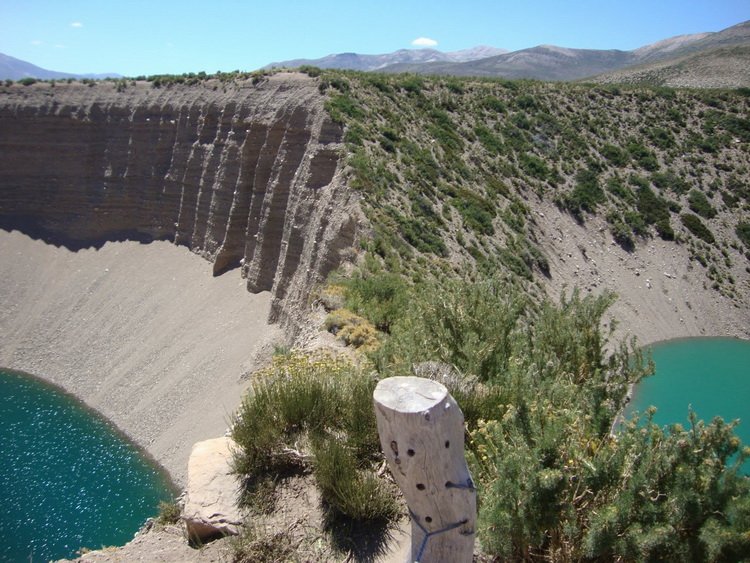 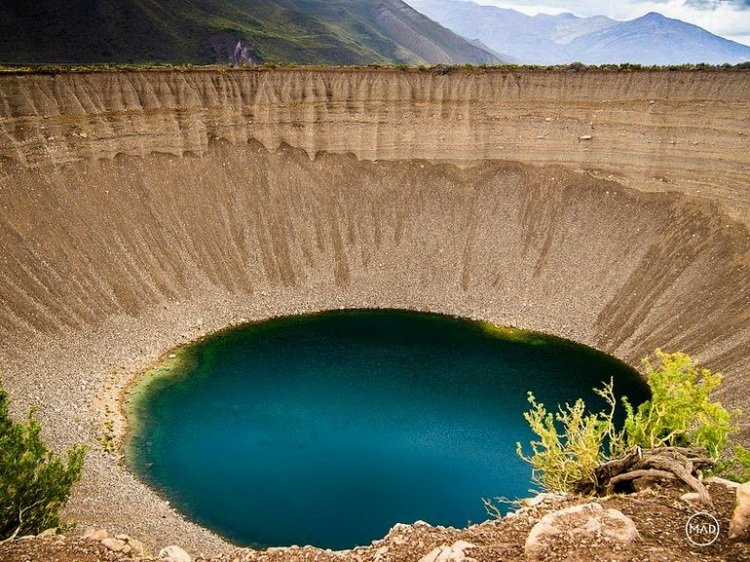 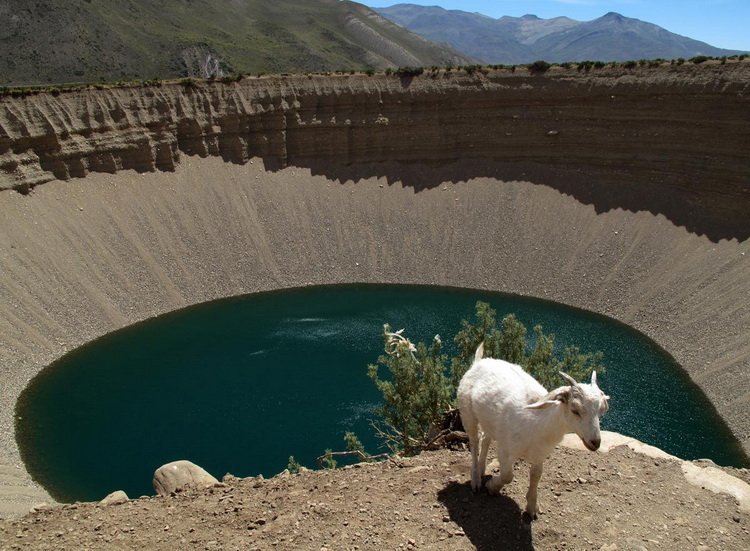 The goat does not care about the Well of Souls at all, because it turned to him … tail 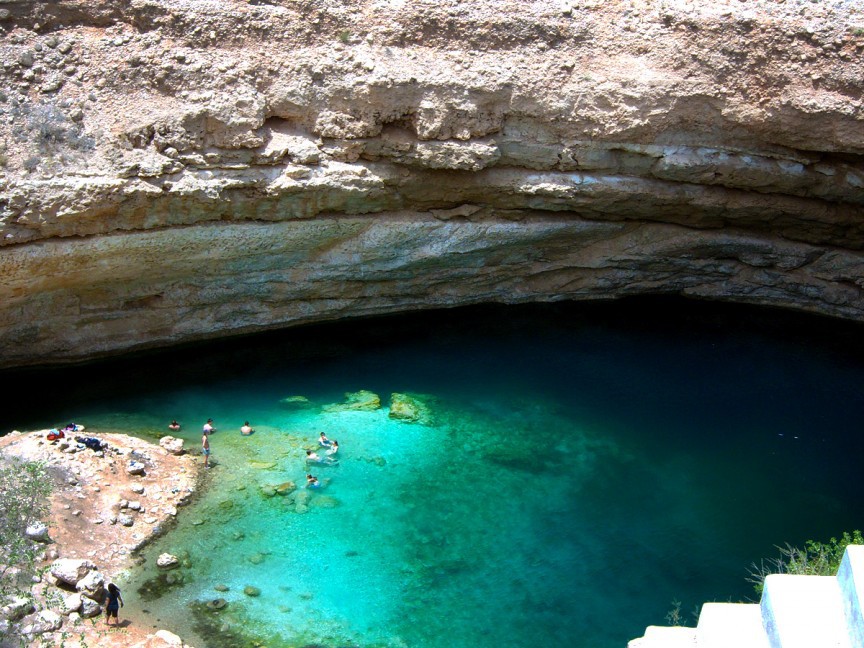 The Bimma Well, located in northern Oman, is often called the most beautiful karst phenomenon in the world. The locals have turned this sinkhole into an attraction that actively attracts tourists – a park has been laid out around it, and swimming is allowed in the well itself. Funnel reaches 40 meters in width and 20 in depth and is filled with bright turquoise water, in which there are small fish. 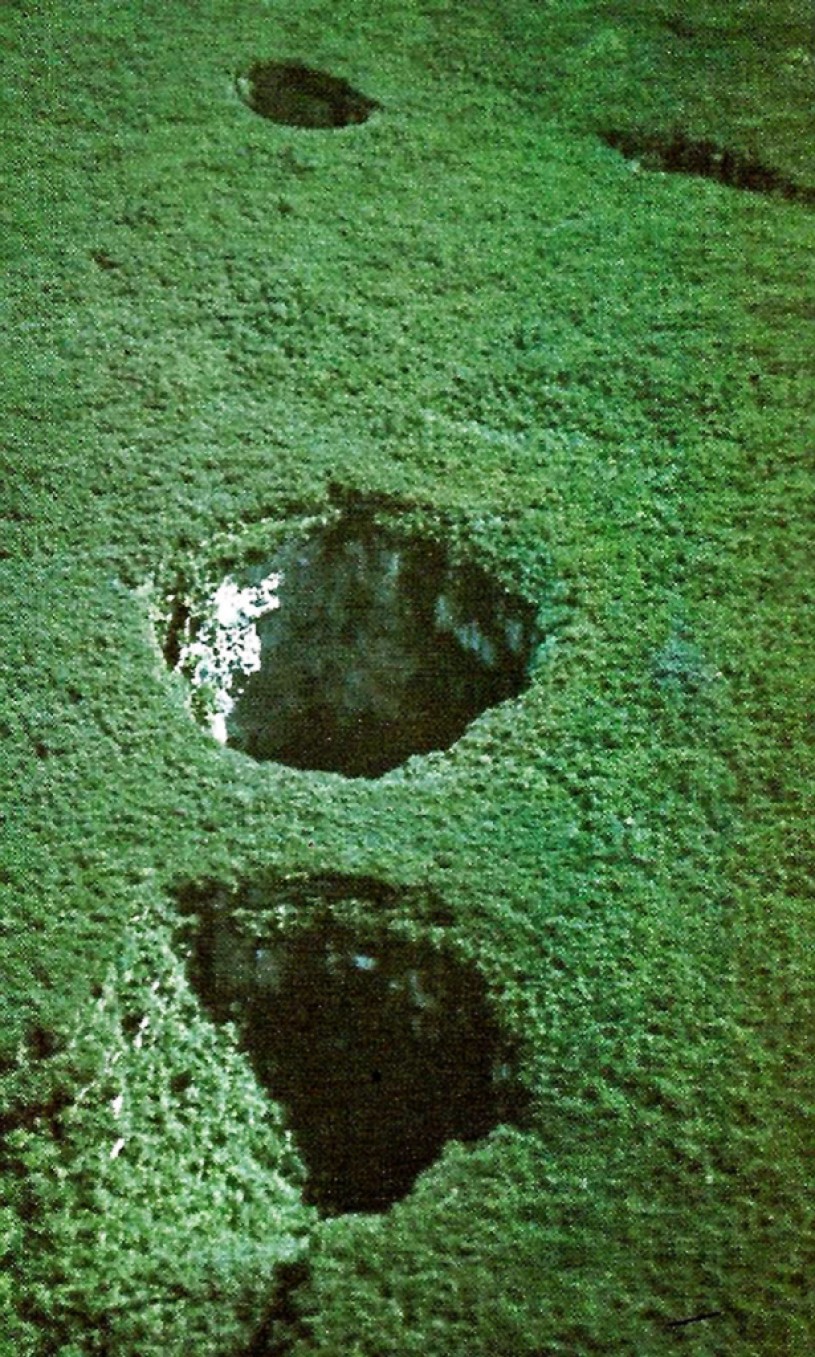 A giant sinkhole that emerged in Venezuela in the middle of the forest, kilometers from the nearest road. The sinkhole reaches 314 meters in depth and is characterized by vertical walls. The crater reaches 352 meters in diameter at the top and widens to 502 meters at the bottom. Its volume is about 21 million cubic meters.

READ
A boiling river in the Amazon . Peru 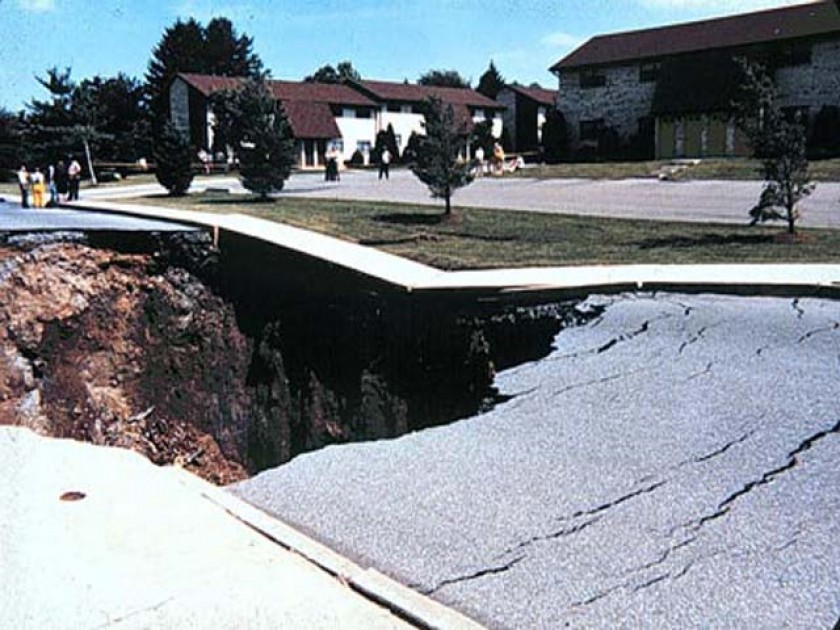 It was formed in 1986 in the town of the same name in Pennsylvania. A few hours before its appearance, residents of the nearby neighborhood began to complain about the loud noise, a little later – about the lack of water. The sinkhole caused a major loss for the city – the administration had to spend almost half a million dollars to restore utilities and repair other consequences of the disaster. The approximate size of the sinkhole is 23 meters wide and 10.5 meters deep. 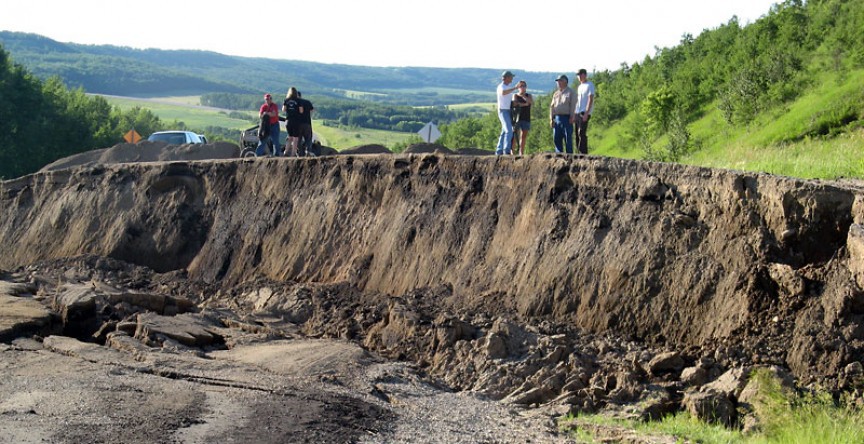 This karst phenomenon, which occurred in Canada, destroyed a large section of the Manitoba Expressway. It was caused by heavy downpours that had just passed through the area. About 200 meters of the highway failed by 8 meters at a rate of 13 centimeters per hour. 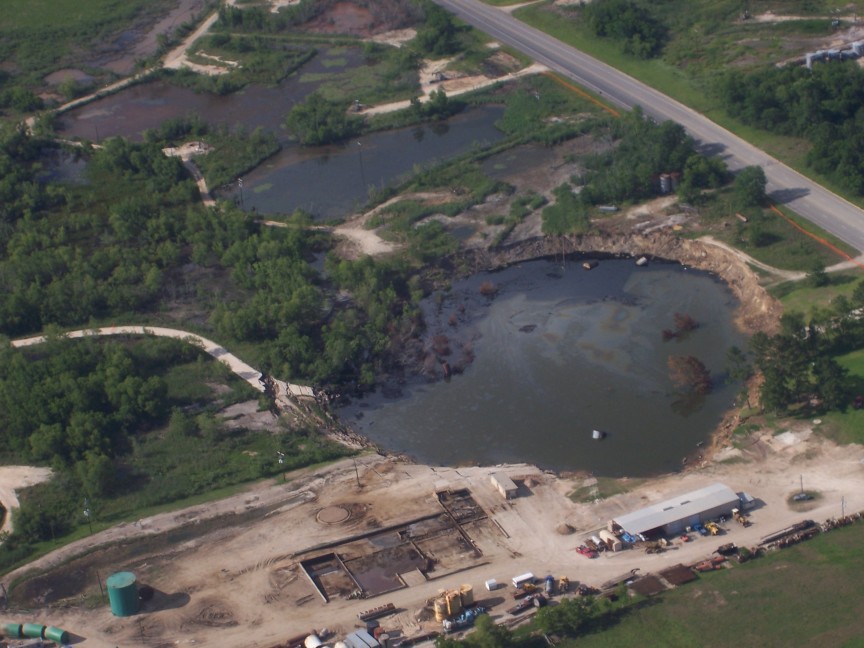 In the town of Daisetta, Texas, a small sinkhole six meters wide has expanded to 274 meters wide and 80 deep. The small oil town of Daisetta is located on a salt dome 6 km in diameter. Experts concluded that the emergence of the funnel was the result of accumulation of waste from oil production in the region. 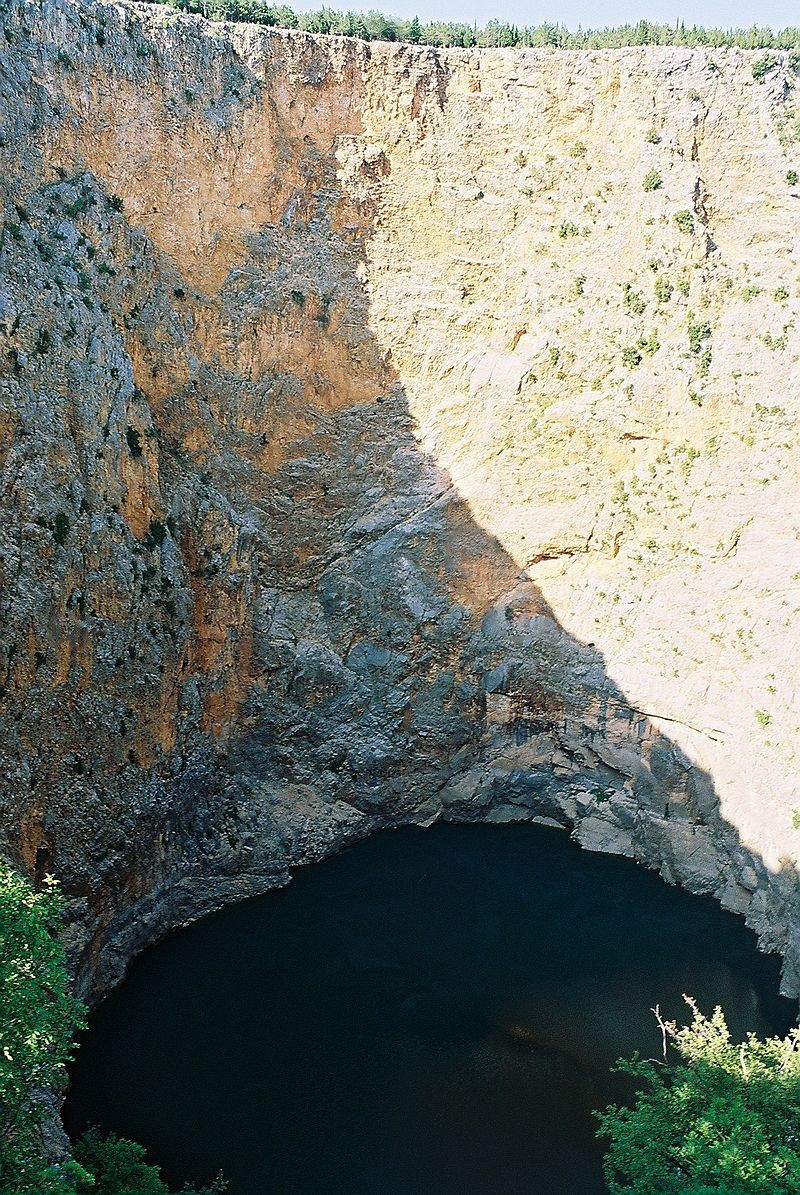 The karst lake formed in Croatia got its name from the surrounding red-brown rocks colored with iron oxide. It is assumed that the lake was formed as a result of the collapse of the ceiling of an underground cave. Reaches 530 meters in depth and 30 million cubic meters in volume. 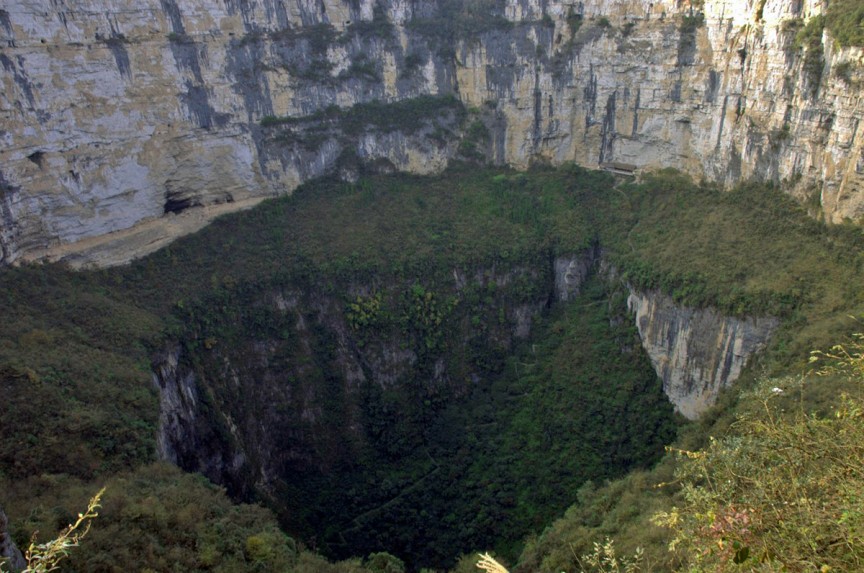 Xiaozhai Tiankeng, aka Heavenly Pit, is the largest sinkhole in the world – 662 meters deep, 626 meters long and 537 wide. This giant hole was formed over 128 thousand years. It was found in China in 1994. To attract tourists authorities have built about 2800 steps leading to the sinkhole. Many come here during the rainy season to admire the waterfalls that form.

READ
The Enchanted Well - bottom as the palm of your hand. Brazil 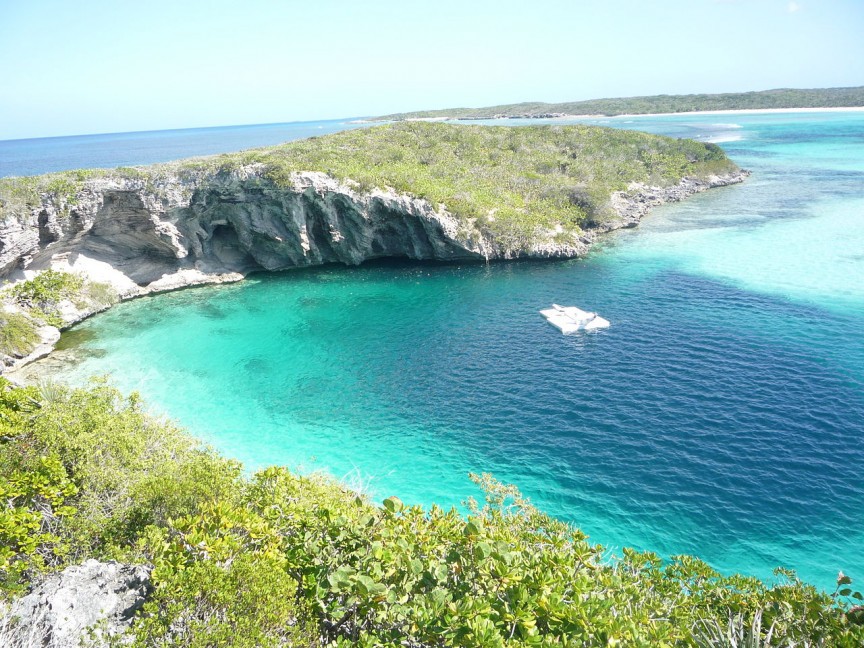 Located in the Bahamas and is the deepest blue hole in the world. Reaches 202 meters in depth, while the depth of other blue holes does not exceed 110 meters. Closer to the surface, the blue hole of Dean has an almost perfect round shape, but at a depth of 20 meters it expands significantly. In 2010 William Trubridge broke the world record here for diving without flippers, breaking the depth of 101 meters. 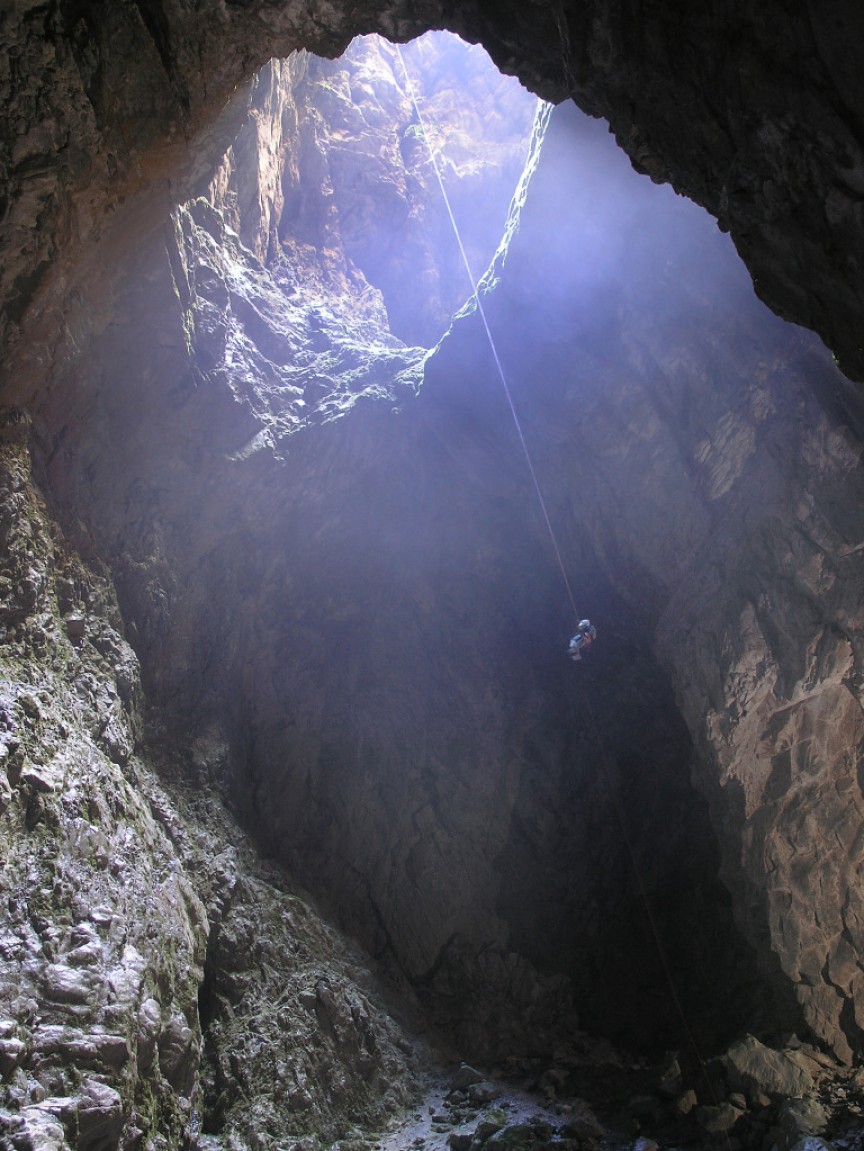 Located in Abel Tasman National Park in New Zealand, is part of the Takaka Hill Cave System. Goes down to a depth of 183 meters. Descending into this cave is the most popular activity for tourists in the region. 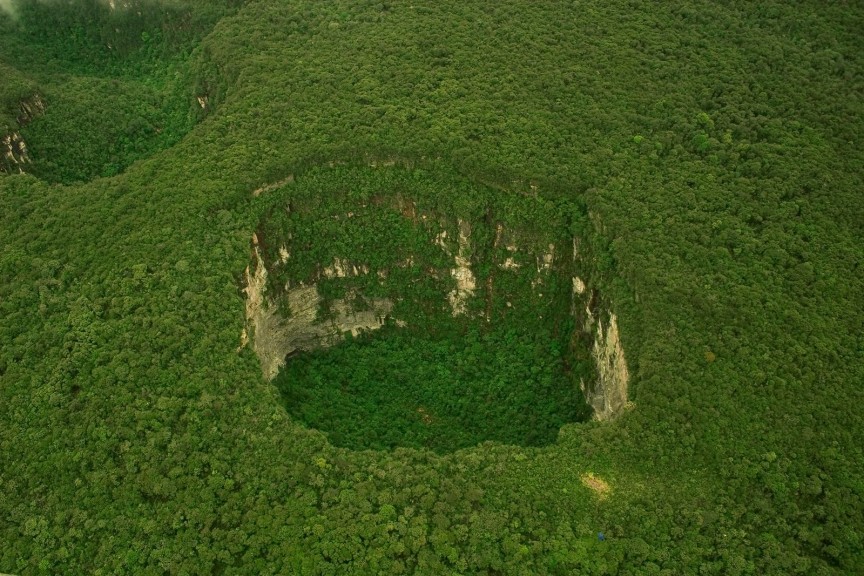 The Sima Humboldt funnel on the Sarisarinhama Plateau has several other funnels, one of which has been called the most beautiful and mysterious funnel in the world. In its depths, its own unique ecosystem has formed over the years. The bottom of the crater is covered with dense jungle, which is home to plants and animals not found anywhere else in the world. 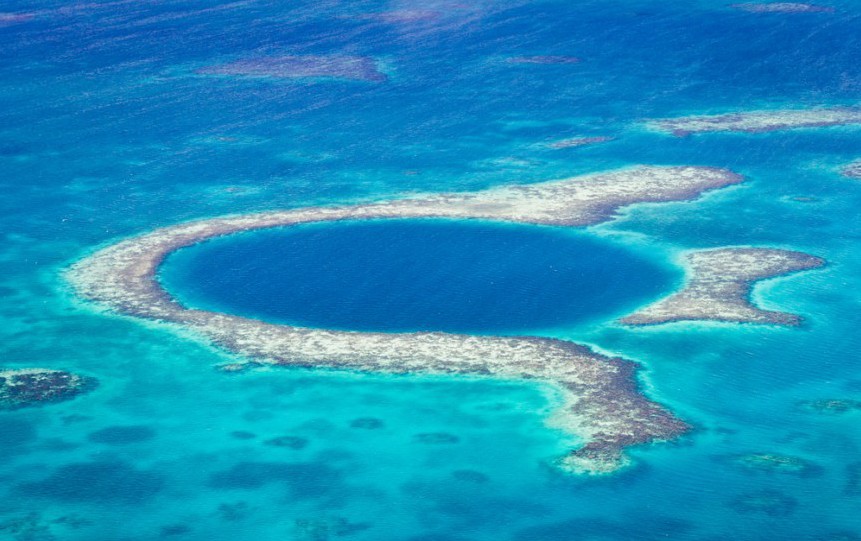 The Blue Hole in Belize, part of the Belize Barrier Reef. It is a circular sinkhole, which goes to a depth of 120 meters and is 305 meters wide. The Great Blue Hole became famous thanks to French explorer Jacques-Yves Cousteau, who listed it among the 10 best places in the world to dive. Despite its inaccessibility, it is still a popular diving spot for divers. 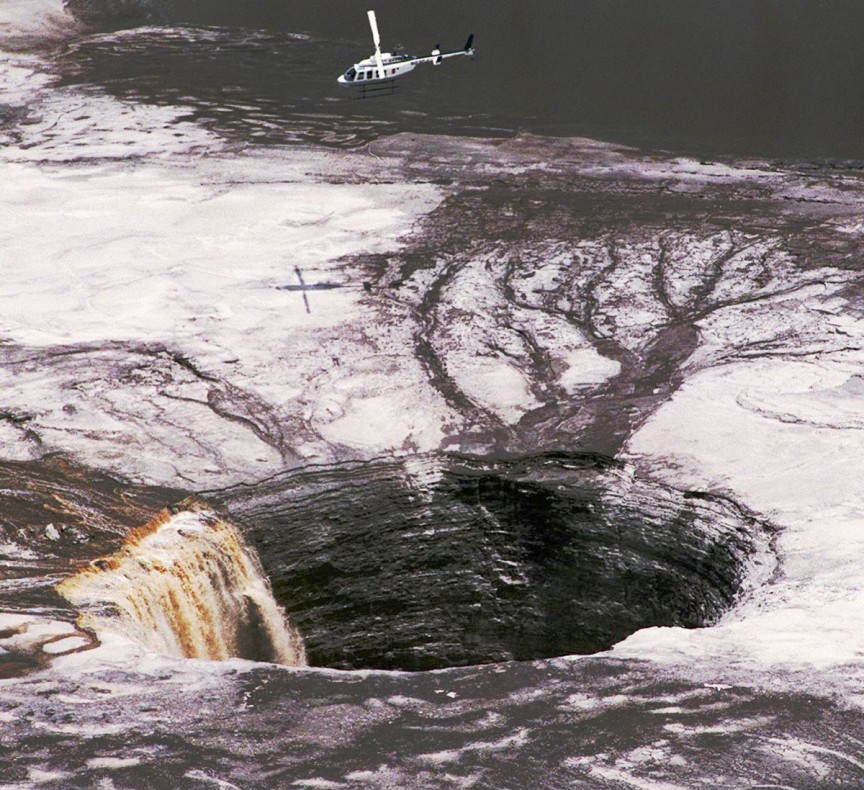 The formation of this sinkhole almost became one major environmental disaster. In 1994 a huge sinkhole of 15 floors was created at the site of the 80 million ton phosphogypsum waste dump of IMC-Agrico in Florida. About 15,000 cubic meters of toxic liquid went into the ground, threatening to poison groundwater and thus 90% of Florida’s drinking water. It took millions of dollars to eliminate the threat.