The 10 smallest rivers in the world

A river is a natural watercourse along a channel from source to mouth that is fed by surface or underground sources. Articles, encyclopedias, and documentaries most often talk about the largest rivers: turbulent, overflowing, full of water, navigable, and rich in inhabitants. “Not every bird can fly to the middle of the Dnieper. as N.V. Gogol wrote.

And meanwhile, small rivers do their small but important work: they remain a link in the water cycle, give drinking water to animals, and carry water. They will be the focus of this article. We present you 10 of the smallest rivers in the world. 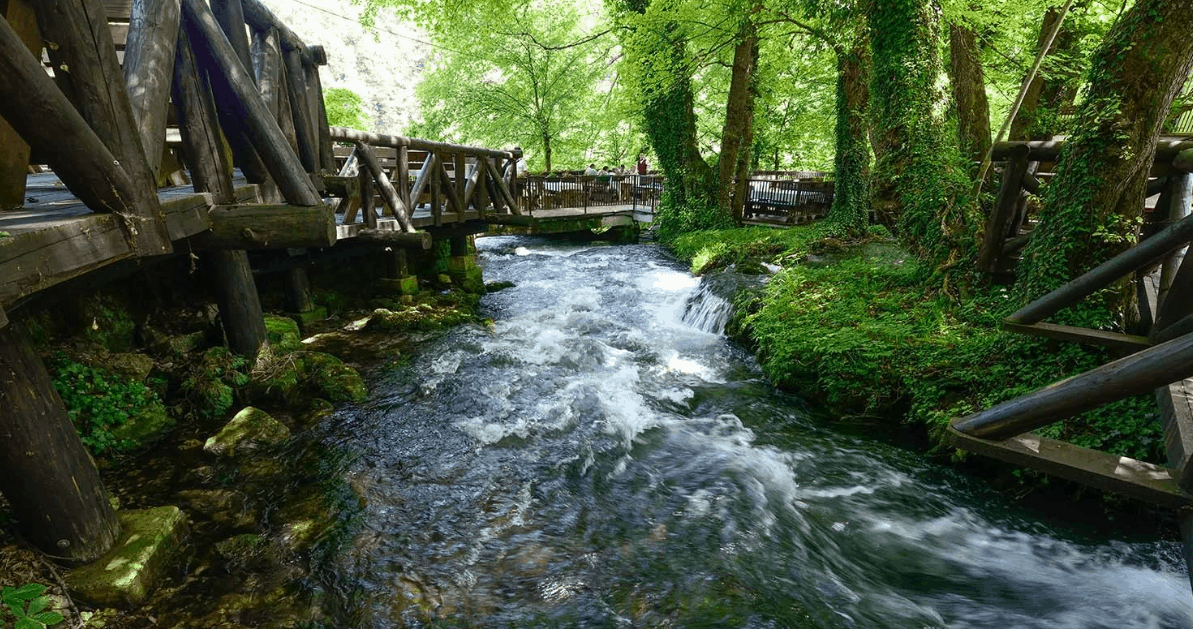 Vrelo is the right tributary of the Drina River in Perucac, Serbia. The stream flows down from the rock, forming a small waterfall, and then slowly carries its waters to the Drina. Near its mouth, there are obstacles of branches and rocks, the water begins to murmur and foam, and after the waterfall it flows into the main river. Because of its length of 365 m, some people call the river Godina, referring to the year.

But despite its short length, Vrelo has all the typical characteristics of a full-fledged river: a mighty source, from which flows whitewater, pond on the right bank, water mill on the left, the tributary of a small stream, the village on the banks and two bridges. 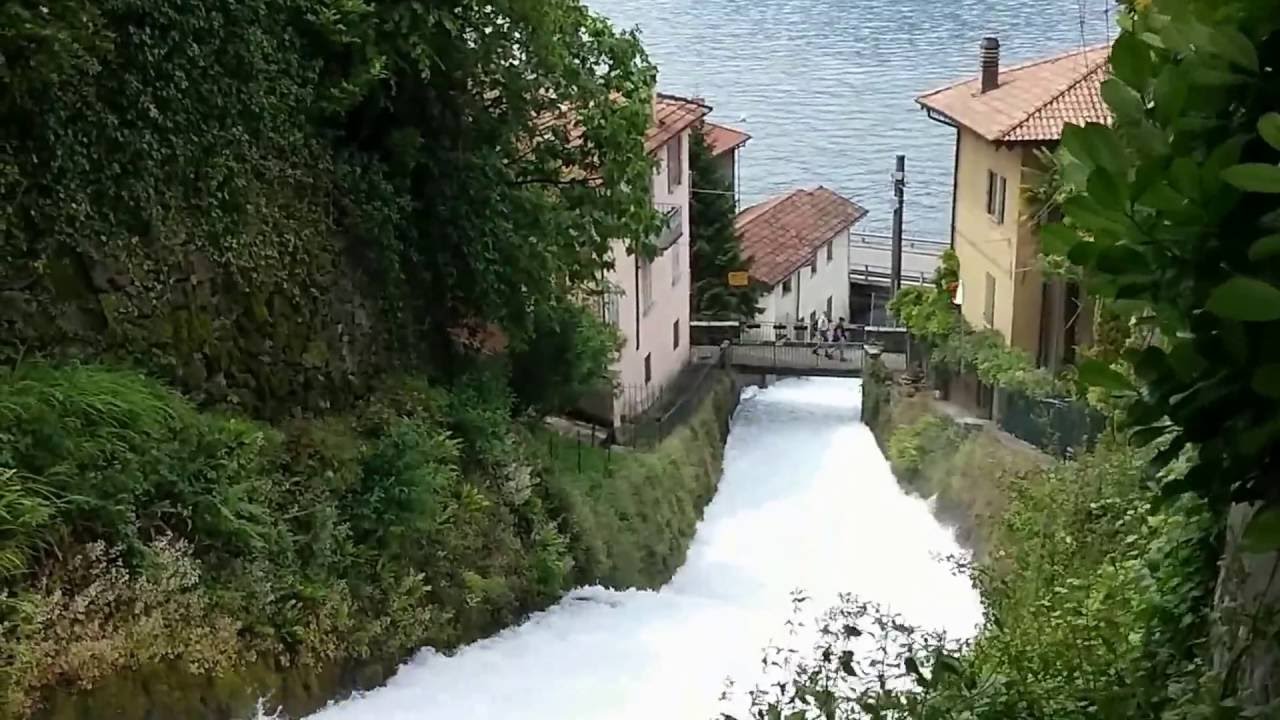 The Fiumilatte is a river in northern Italy. It starts in Grigni, in the Bergamo Alps, and carries its waters into Lake Como, just south of Varenna. Its name from Italian means “milk water”. The river got its name because of the whitish color of its water.

One of the features of the river is that it periodically dries up. This usually occurs in mid-October and water returns in March. This is why the river was given the nickname Fiume delle due Madonne (“river of the two Madonnas”), in honor of the holidays of the Annunciation (March 25) and Madonna del Rosario (October 7). This phenomenon may mean that the river originates in an unexplored cavity that fills up periodically.

READ
Cape Piai on the map of Eurasia: the whole truth 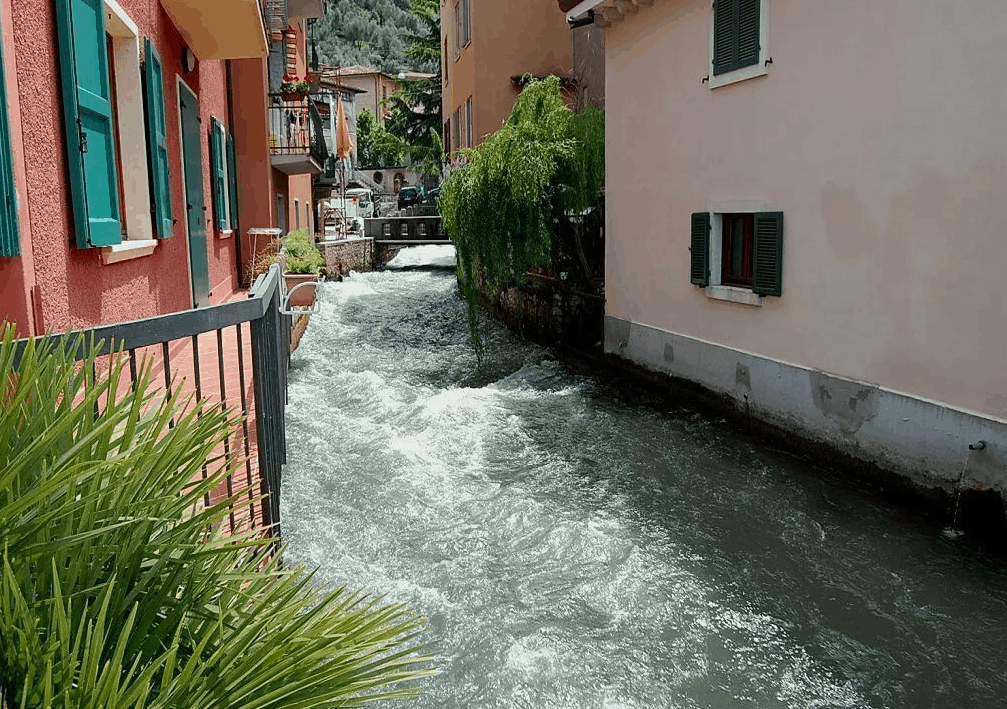 The Aril flows in Venice, Italy. It is fed by powerful underground springs under the village of Cassone, Malcesine, and flows into Lake Garda. A small tributary, only 175 meters long, flows under three bridges and foams with a small waterfall before flowing into Garda.

The Aril is known for the rainbow trout, which swim up the river to the lake where the Aril originates to lay their eggs. Tourists who come to the Garda are sure to go see the Aril, the smallest river in Italy. 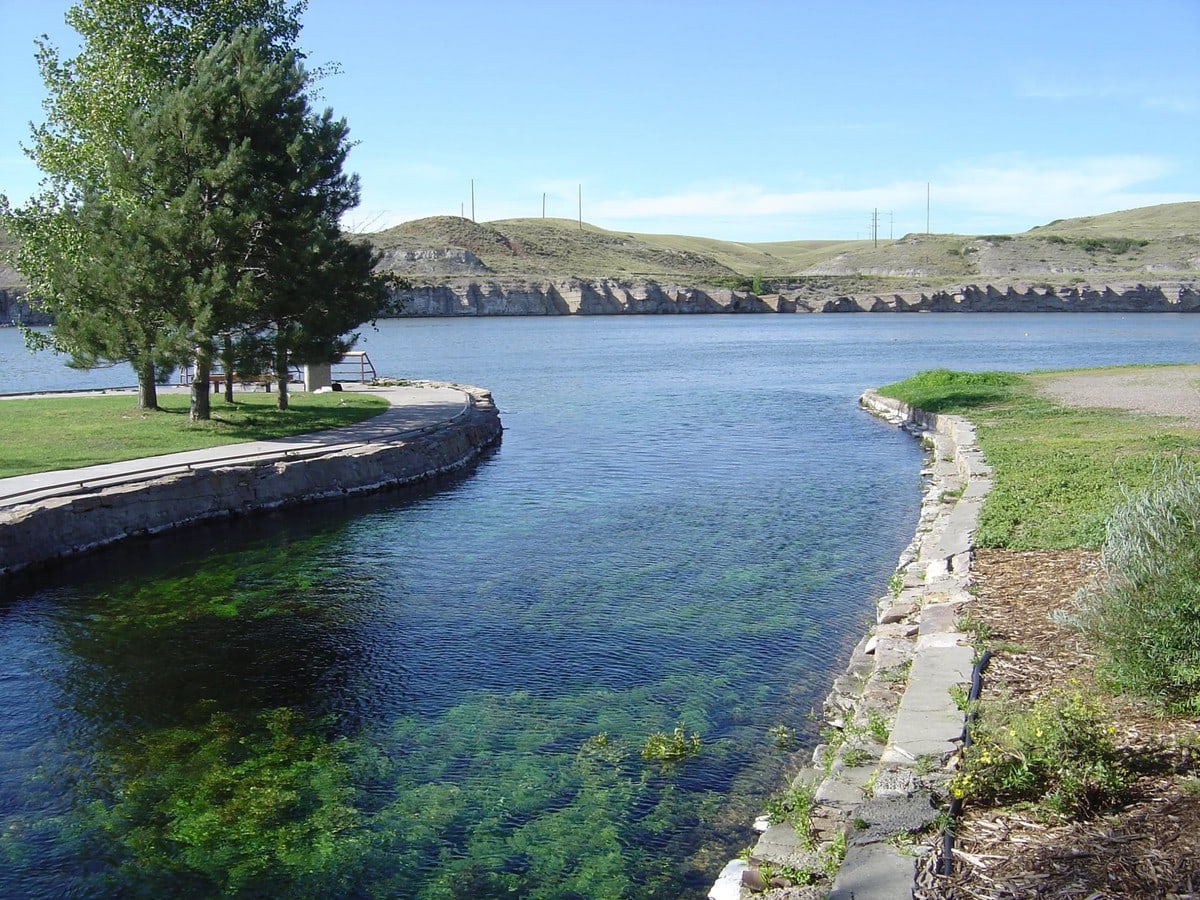 Rowe River is a small river in Cascade County, Montana. It originates in Giant Springs, a large spring near Great Falls that is fed by melting ice. The river flows into the Missouri River in just 61 feet.

In 1987, students at a local school decided to campaign for a Guinness World Record as the world’s shortest river. It didn’t have a name at the time, so the students first applied to the U.S. Board of Geographic Names (yes, there is one). The river was named Roe, which means “roe.

The title was awarded, but there was a lot of controversy over length measurement, and some referred to the Rowe River as a drainage ditch.

The Jezernica flows through the town of Idrija in western Slovenia. It is fed by springs in the hills and flows into Idrija River of the same name with the city, which is 60 km long. Only a normal river would not surprise anyone, while the Jesernica has a length of only 55 m. To the south of the city there is also a wild lake. 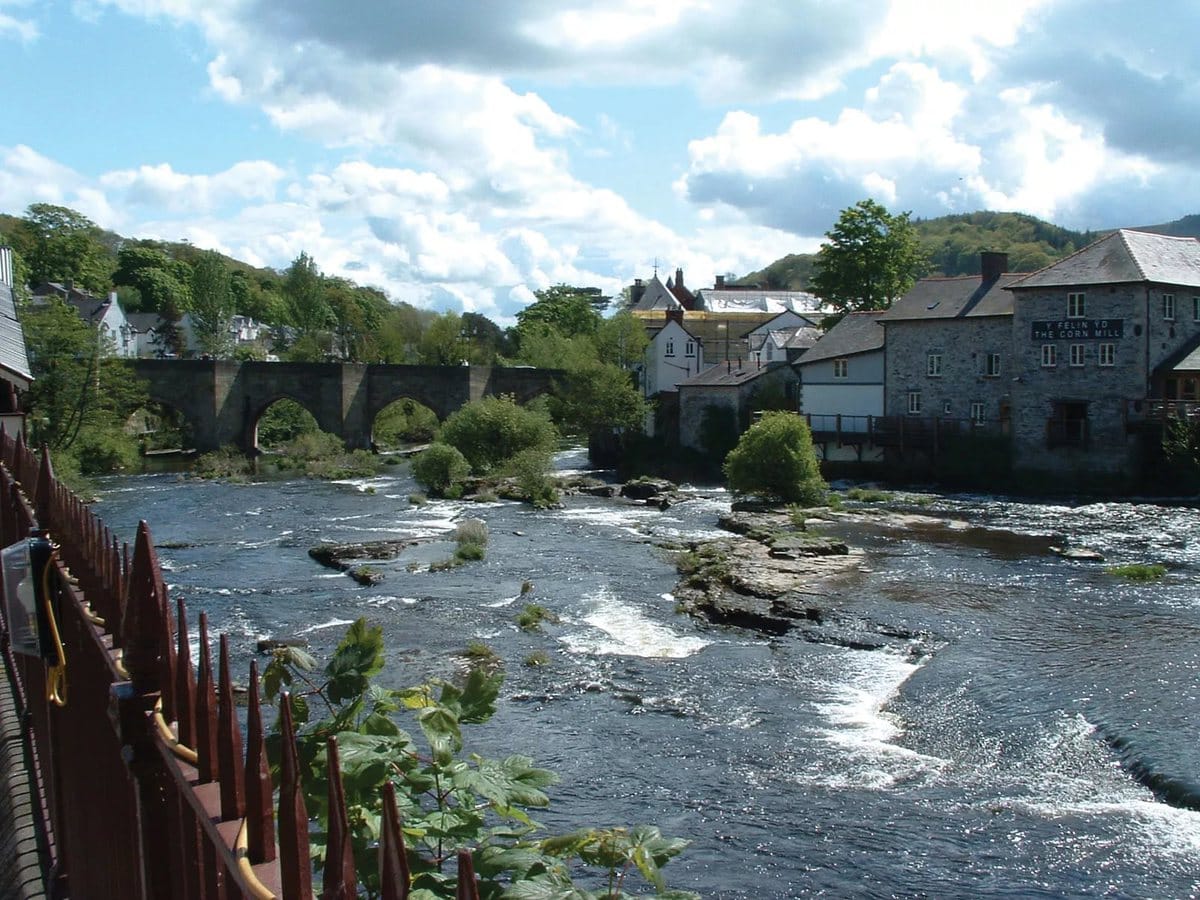 The Dee River ( D River ) is a river in Lincoln City, Oregon, that for some time was mentioned in the Guinness Book of World Records as the shortest at 130 m. In 1989 it lost its title as Guinness named the Rowe River in Montana the shortest. Lincoln City residents were outraged, re-measured the length and got a record 36 m. But Guinness didn’t change anything, and since 2006, the “shortest river” position has disappeared from the book altogether.

READ
The shortest and longest day of the year

The Dee flows out of Devlis Lake, passes under Highway 101, and flows into the Pacific Ocean, all the while staying within Lincoln City’s boundaries. The D River rest house off Highway 101 becomes the site of one of the largest balloon festivals twice a year, in the summer and fall. 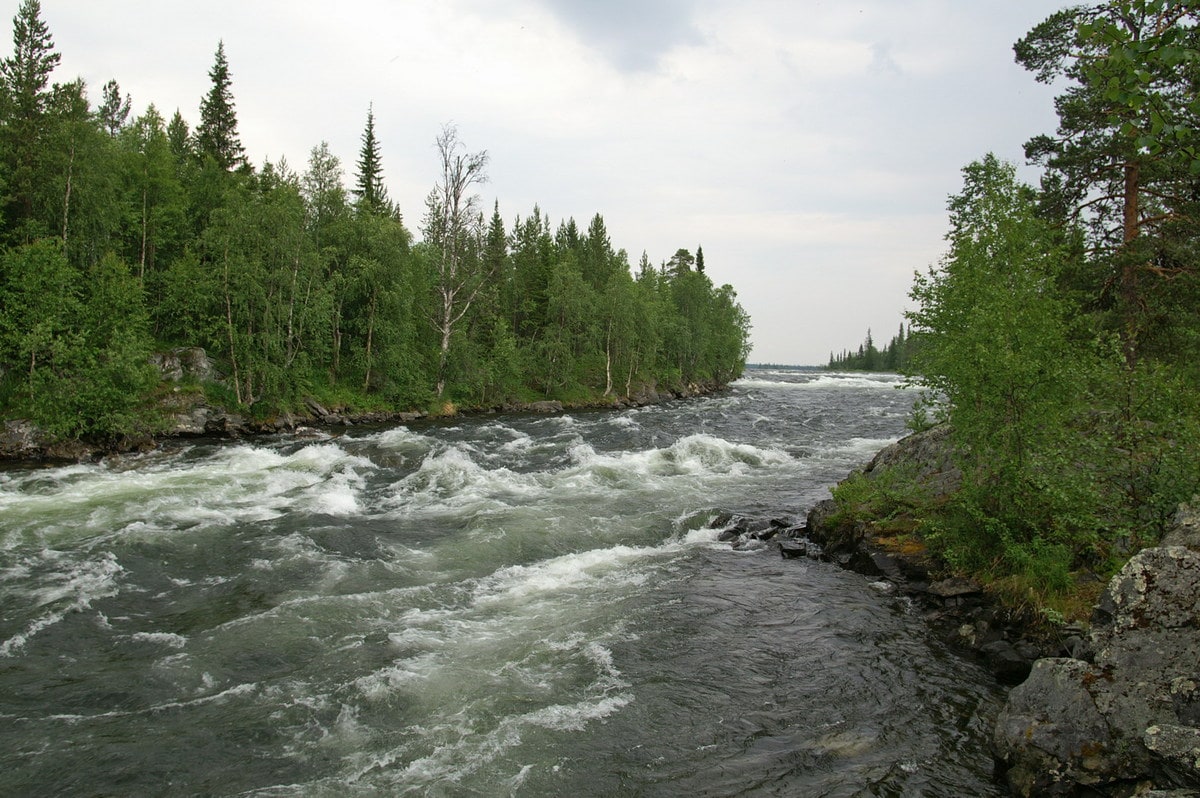 The Ombla is the shortest river in Croatia, its length is about 30 m. It flows northeast of Dubrovnik and flows into Rijeka Dubrovacka, a bay of the Adriatic Sea. In fact, the Ombla is part of the submerged river valley, formed by the rising sea level. It is fed by underground springs, on its way to the bay it takes the waters of one tributary and flows to the sea.

From the Ombla, water is drawn for the Dubrovnik city needs. For a long time, the construction of a small hydroelectric power plant was discussed, but the project has raised fears of environmentalists. 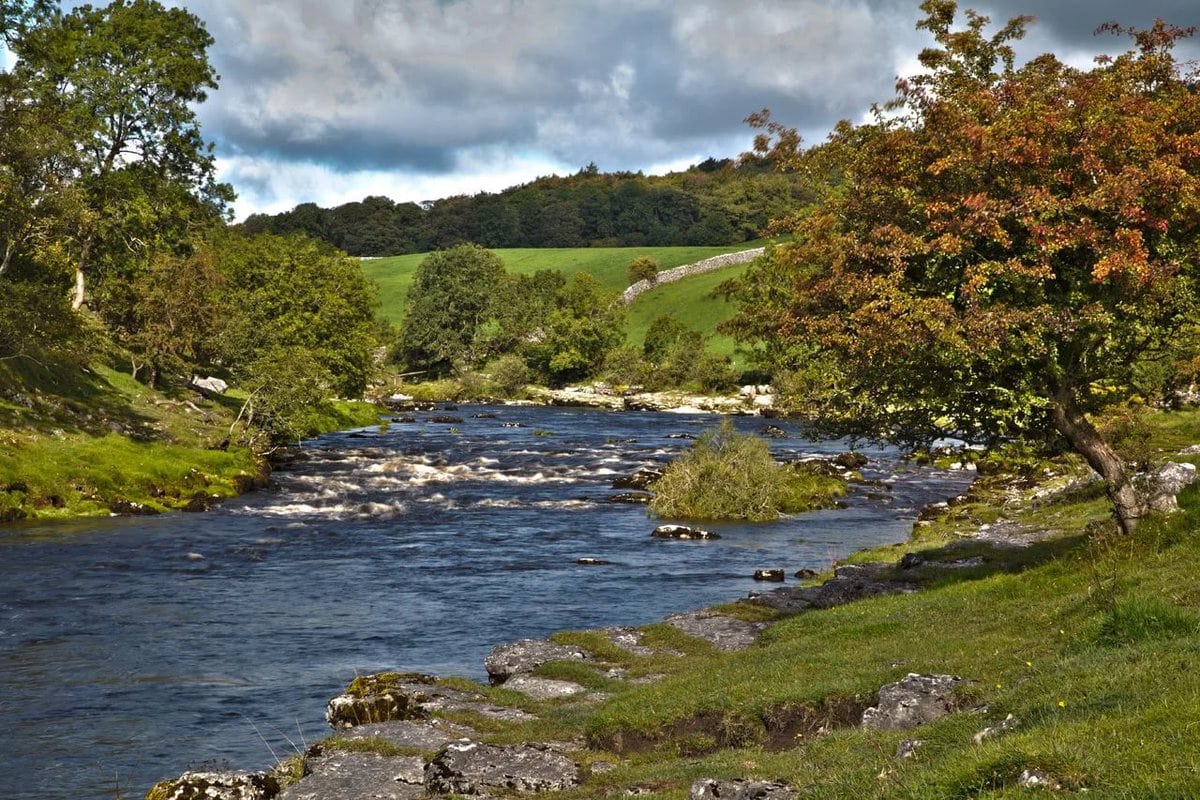 The Norwegian river Kovasselva originates in Lake Kovassvatnet and flows into the Norwegian Sea, flowing only 20 meters. It is on Hitre, the seventh largest island in Norway. It is located between the Trondheimslei Strait and the Freifjorden River.

Today the island is one municipality of Hitra, although it used to have as many as four municipalities. The nearest towns to reach Kovasselva are Kristiansund and Orkanger. 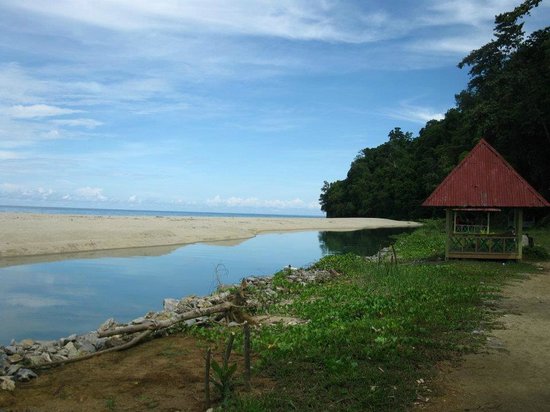 The Tamborasi River flows in the town of the same name in the regency of Kolaka, Sulawesi, Indonesia. It is only 20 m long and 15 m wide. It carries its waters into the Flores Sea, into the Bay of Bon. Tamborasi boasts picturesque surroundings: rocky shores and lush vegetation make these places a real find for tourists.

The river itself has cool but pleasant water, and at the mouth of the river there are beautiful beaches with fine white sand. Tamborasi has numerous small tributaries that collect water from all over Sulawesi and carry it into one of the shortest rivers in the world.

READ
The Red Sea: the warmest sea in the world 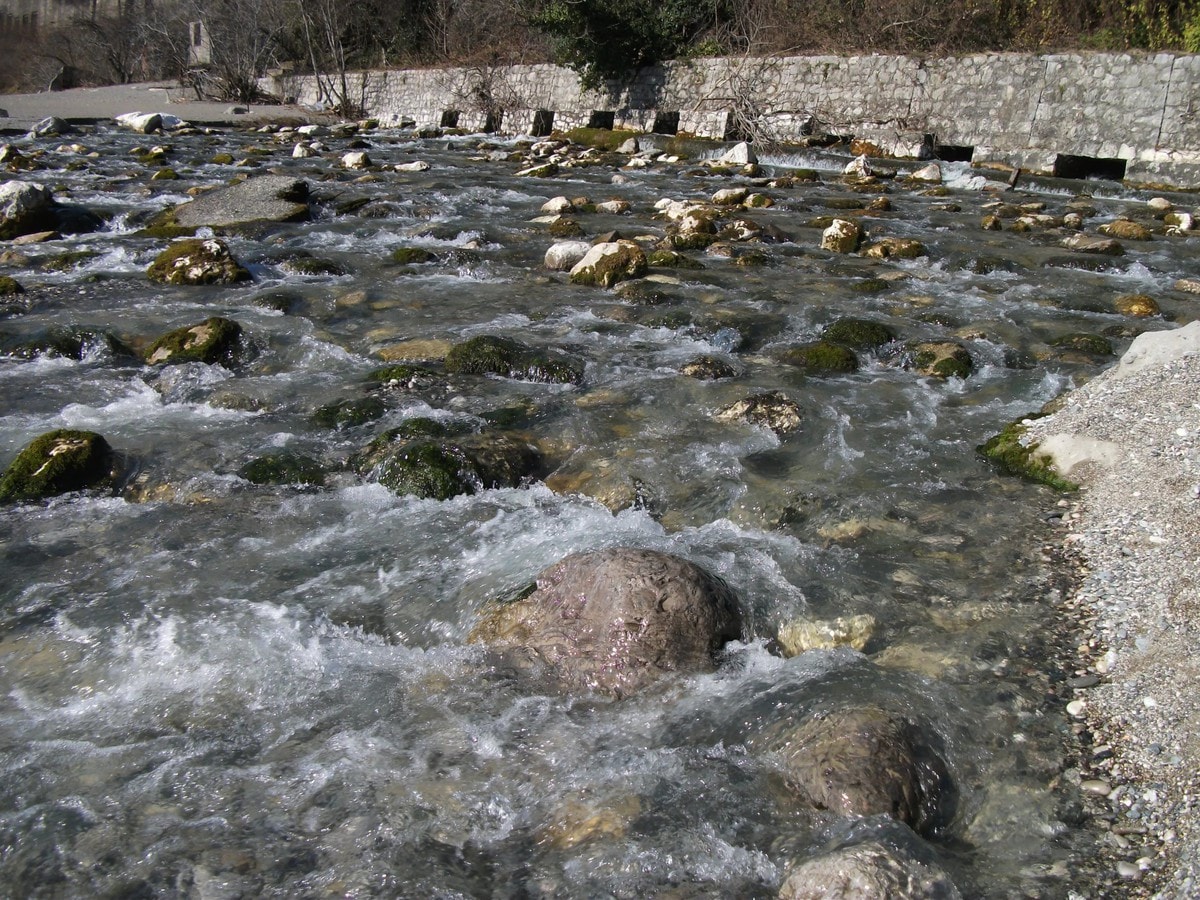 The world’s shortest river flows in the Gagra district of Abkhazia (in foreign sources – in the Abkhaz Autonomous Republic in Georgia).

The river is of karstic origin. It literally bursts out of the Krubera-Voronya cave (which is considered the deepest in the world) and carries its waters into the Black Sea. Usually karst waters are poured directly into the sea, but in this case, they come to the surface and flow through it for some time, forming a full-fledged, though short, river.

The water here is very cold and clean, in composition close to spring water. Reproia became a part of the local legend, according to which, in the underworld there lived a spirit. The spirit had a son and three daughters, and forged magnificent weapons for his son and his companions to fight their enemies.

But when the spirit died, there was no one else to make weapons, the warriors weakened, the son was defeated, and the enemies pelted the caves with stones. And after a while, streams broke through, the tears of lonely underground beauties.

The 6 Shortest Rivers in the World 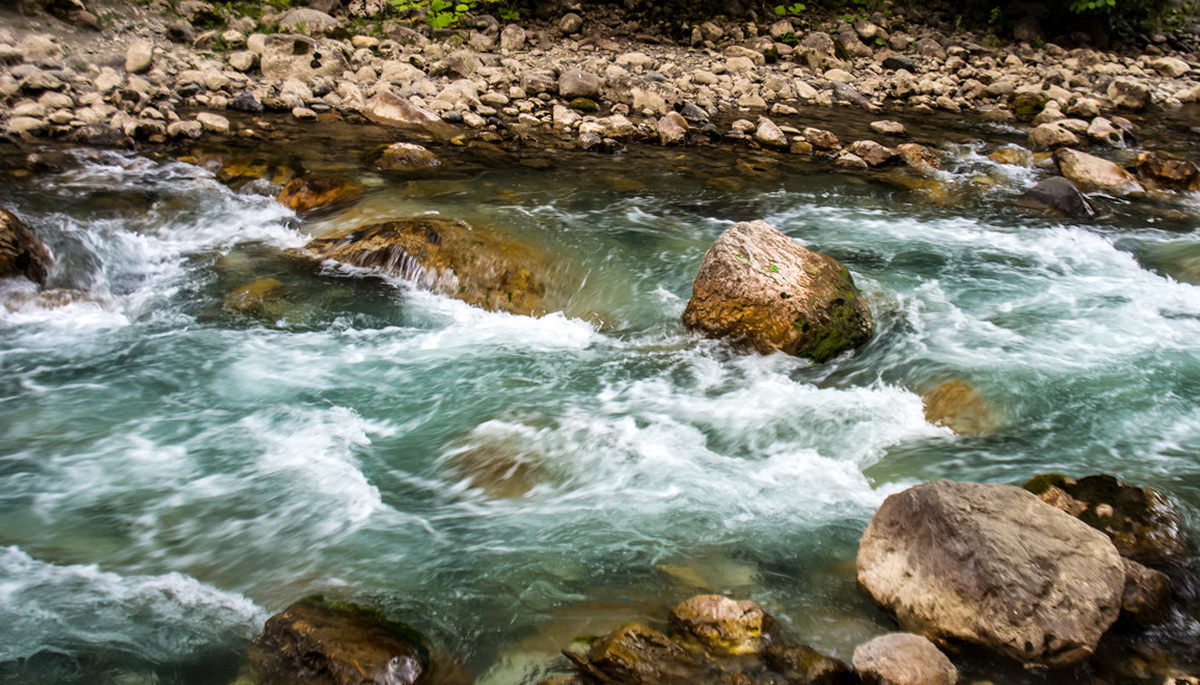 For many people, rivers are long, winding streams of water flowing down high mountains and running across plains until they reach a lake, sea, or ocean.

This is true of most rivers in the world. But there are rivers so short that you can traverse them along their entire length in a few minutes, which begs the question: what defines a river?

According to Wikipedia, a river is any natural flow of water that flows along a channel from source to mouth. Rivers can be surface and underground, mountain and plain, young and old, multi-channel and even two-story.

All rivers are formed when water moves from a higher to a lower point until it reaches its final destination.

The main distinction between rivers and streams is based solely on size and is perhaps subjective. The definition is so vague that there are many contenders for the title of “the shortest river in the world.” Let’s take a look at some of them.

READ
6 scariest places in the world, a creepy selection 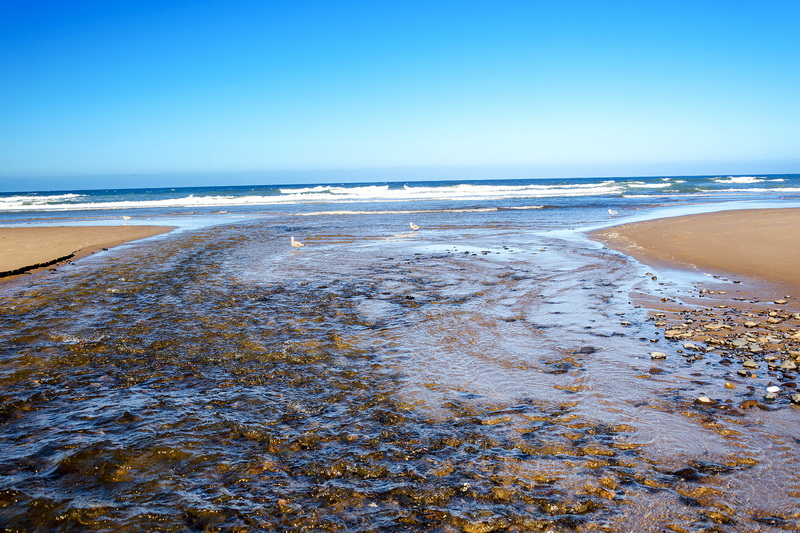 D River in Oregon, USA, flows from Devil Lake into the Pacific Ocean. Its path is only 130 meters.

The Rowe River in Montana, is the shortest river in the United States. The Rowe River flows from Giant Springs (National Park) to the Missouri River. It is only 61 meters long. For a while the Roe River was listed in the Guinness Book of World Records as the smallest river. 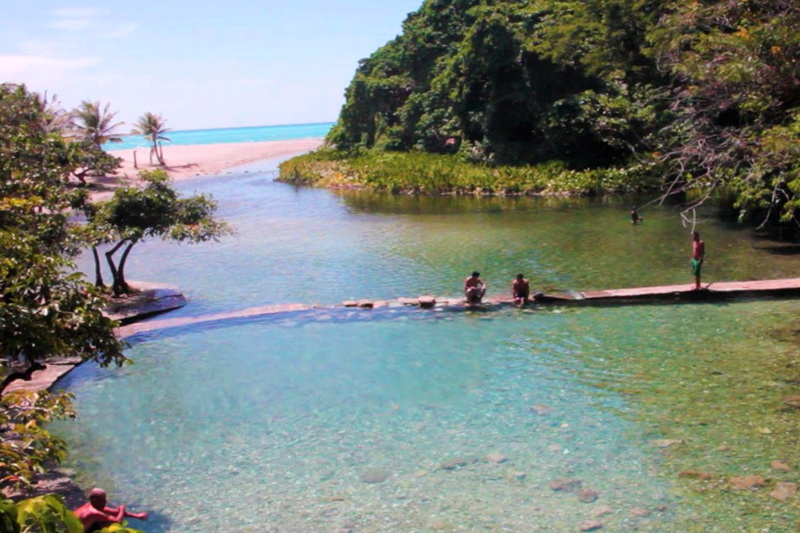 Los Patos (the Duck River), is located in the province of Barajona in the Dominican Republic. Its length, like the Row River, is 61 meters. The river is very popular with local fishermen and is a favorite place for swimming.

Tamborasi River (Southeast Sulawesi, Indonesia) is only 20 meters long. The river rises from a spring located on a rocky hill, the turquoise-colored water crosses a narrow beach and flows into Boni Bay. It is a popular place among tourists. 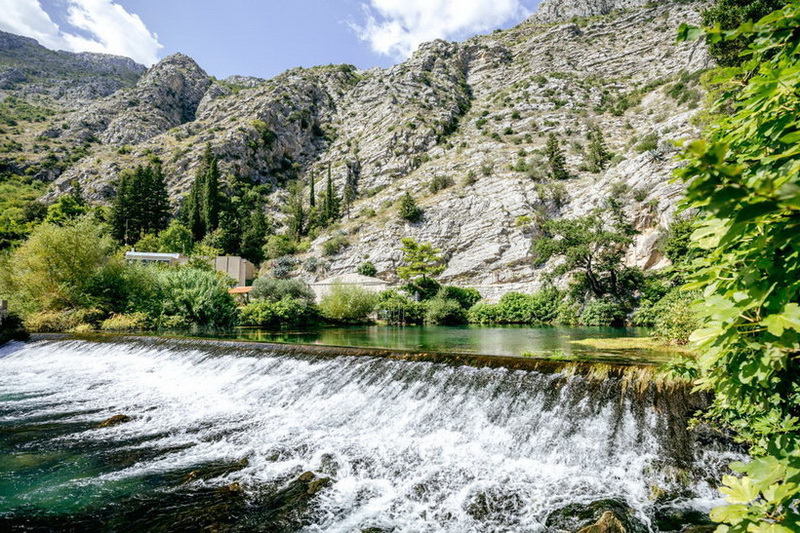 River Ombla in Croatia is only 30 meters long. The river rises as a karst spring, fed by underground water in a large cave at the foot of a 400-meter massif. The stream then reaches the bay through which the Ombla flows into the Adriatic Sea.

Despite its short journey, the Ombla River has a huge catchment area of more than 600 square kilometers. The Ombla provides Dubrovnik citizens with drinking water. 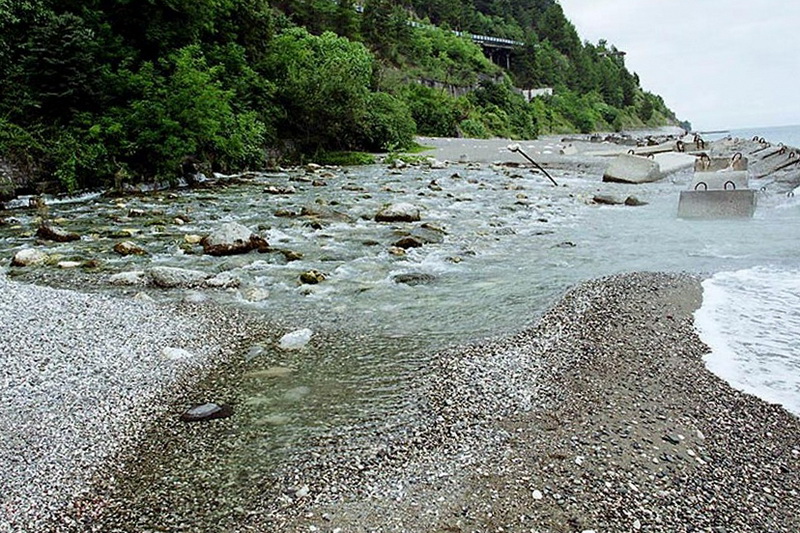 The River Aprua, located on the outskirts of the resort town of Gagra in Abkhazia, is a record-breaker in this list. Its length is only 18 meters. The River Reprua comes from the karst waters of the Krubera Cave (the second deepest known cave on the Earth). The Reproia flows into the Black Sea.

Since 2006, the Guinness Book of Records has not listed a category for the shortest river.

What is the longest river in the world? It turns out this question is difficult to answer correctly. The Nile or the Amazon? To date, this question remains controversial. The calculations are influenced by the correct definitions of source and mouth. The Nile, for example, is thought to have been “shortened” because of the Aswan Dam, while the Amazon has had its “beginning” revised.

READ
How to get to the Shondong Cave in Vietnam and how much does it cost?

The Nile to Caguera is 6,650 (7,088) km and the Amazon to Ucayali is 6,400 (6,992) km (according to calculations by scientists from Brazil). According to other studies, the length of the Nile was 7,088 km against 6,575 km of the Amazon. Controversial values of river lengths are in brackets. According to the Russian-language Wikipedia, the longest river in the world is the Amazon, and according to the English-language (as well as German, French, etc.) Wikipedia – the Nile.