Village Oberammergau (Germany), despite the small area (about 30 km 2 ), is considered one of the most unusual attractions of the country. It is located in Upper Bavaria and belongs to the district of Garmisch-Partenkirchen. Many famous German painters, writers, architects, and political figures were born there. Today there is a permanent population of no more than 5 thousand people, mostly representatives of creative professions: artists, sculptors, craftsmen.

The village of Oberammergau can rightfully claim the title of the oldest in Germany. Once the valley of the river Ammer, lost in the foothills of the Northern Alps, was inhabited by ancient Celts. Centuries after that, the area came under the protectorate of the Holy Roman Empire and was a key population center on the Rome-Augsburg road. According to reliable historical sources, Emperor Ludwig IV of Bavaria loved to stay here.

The local climate is temperate continental. It is characterized by warm but not hot summers and mild winters without severe frosts and heavy snowfalls. From June to August the average temperature is +18 ° C, so tourists should bring light jackets or windbreakers: the evenings will be cool. It is worth packing an umbrella or raincoat, because in the summer season in Oberammergau weather is mainly cloudy and rainy.

In winter, the thermometer rarely falls below -1 ° C, and snow falls infrequently and melts very quickly. However, if you are planning a hike in the nearby mountains, keep in mind that the snow cover remains until spring. It is considerably colder in the spring than it is in the fall.

In Oberammergau the attractions are very compact. After all, in the village are just a few narrow streets with old houses, deservedly considered a masterpiece of German art thanks to the original painted facades. Here almost every building recalls the works of great artists, and together they form a giant art gallery in the open air. When visiting the village, tourists should definitely pay attention to:

Interestingly, many of the paintings, which impress with their perfect elaboration of details and vitality, were created by the same person – Franz Seraphim Zwink. This eminent artist was born and spent his whole life in Oberammergau, and painted dozens of houses in the unusual “Luftlmälmarai” style.

You don’t have to save a lot of money to visit Oberammergau. See most of the old houses with unique paintings can be absolutely free, just wandering through the streets of tiny town-village. Whether it’s religious scenes, fairytale motifs or traditional ornaments contrasting beautifully against the white walls, you’re sure to find something to interest you.

But there are many other attractions waiting for you as well, including:

Fans of skiing and paragliding should take a cable car up the mountain Laber (the price of the ticket is 14,5 EUR for adults and 5 EUR for children). The elevator operates from 9:00 to 17:00 (until 16:30 in winter). The “highlight” of the village is a modern rail sledging track Alpine Coaster, on which you can “with the wind” down from the Kolben mountain to the valley for only 6.5 EUR.

READ
Zaragoza - city in detail on the map of Spain

The easiest way to get to Oberammergau is from Munich, where the international airport is located. The average cost of economy class tickets is 130-160 EUR. After arriving directly at the terminal, you can buy a train ticket to the village from special vending machines. It departs from Munich Central Station, but will require a change in Murnau or Oberau (as indicated on the ticket). The travel time does not exceed 2 hours.

Oberammergau is the largest tourist center in Bavaria, which allows you to get acquainted with the traditions and culture of this part of Germany. 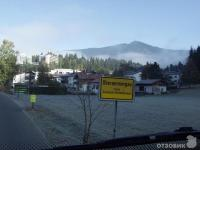 There are such villages in the world, where every house is like a picture! Take a picture of it, send the photo to print, and you do not need to think up any design for postcards:) Ready-made holiday greetings or illustrations of fairy tales. You arrive.

The wonderful village of Oberammergau deserves the attention of lovers of art, nature and sport. And in this wonderful place all three of these aspects can be combined very harmoniously. Let’s start with activities, although this is not what Oberammergau is known for. But without.

What does the first perception of something really mean? It is the feeling of “liking” or “disliking,” and everything else is just an attempt to rationalize that choice. An hour’s drive from Munich in the Ammer Valley and the foothills.

A little pearl of Bavaria.

There aren’t many places on our planet where time seems to stand still, where we forget at least for a moment about vanity, about our problems. I don’t know about you, but for me it’s Bavaria.

A fairytale village of craftsmen amidst colorful alpine nature and a tradition of theater.

READ
Tobolsk and places of interest

When I had the desire to go to Bavaria, the first thing I wanted to see was Neuschwanstein Castle Excursion (Schwangau, Germany) and the village of Oberammergau. This small village with such a complicated name is an hour away.

The village of Oberammergau is located in the very south of Germany in Bavaria. The first thing you notice when you get to this village are the stunningly painted houses. The first thing we did was go to the central square, where we admired the house.

A romantic spot in the Bavarian Alps

The famous village of Oberammergau is only an hour’s drive from Munich. The place is very popular with tourists, regardless of the season. In the winter there are a lot of fans of alpine skiing. And in the summer, a lot of tourists who want to enjoy the beauty.

A fabulous village amidst mountain splendor

My sister and I took an excursion from Prague to Germany to the Bavarian castles. And did not expect that we would be taken to such an amazing place as the village of Oberammergau among the mountain ranges. We arrived quite late from Munich.

A fabulous painted town in Bavaria

With this review, I’ll start my story about an autumn adventure that happened to me and my friends one week in October. I had heard about this fabulous Bavarian village with a hard to pronounce name Oberammergau and here.

Do you want to get into a fairy tale? Then go to the most beautiful village in Europe.

The Alps, a beautiful place for families, children love it, lots of different souvenirs, great photos and memories.

In 2005 we were on a business trip in Munich. We had some free time, and we decided to take a one-day excursion by bus to the village of Oberammergau. I didn’t really know anything about it at the time.

You won’t find such a magical Christmas atmosphere anywhere else.

We stopped in Oberammergau on our way from Neuschwanstein. To be honest, that was the first time I heard about this village, I had never heard about it before. We went in early October, but Oberammergau was already welcoming Christmas.

READ
Sights of the Monastery of Alcobas

In Oberammergau we arrived late in the evening and could not appreciate all the beauty of the village. We stayed at Alte Post. This place was our stop on the way from Munich to Neuenschweinstein Castle. Immediately we set off.

Welcome to the fairy tale!

We were unlucky with the weather, but as you know, nature has no bad weather, as for the place itself, we found no minuses

This magical place we visit during a two-day excursion Munich + Bavarian castles, we will stay overnight here after a busy program in Munich. Often, our guide tells us, tourists think that the main thing in this .

Stopped by in September 2019 as part of a tour from Prague to Bavaria. The beauty of the village, its atmosphere makes you have such strong feelings that you can never forget it and will always dream of going back there. This.

As part of our journey through Austria and Germany, we rented a car and on our way to Munich, we stopped by the village of painted houses in Oberammergau on the way. The village is part of the Bavarian states in Germany, and its population.

To be inside the legend

Hello again, my friends and guests! I decided not to put it off for long to write about the village, which we visited on our way back from the castle Neuschweishein to Munich. Again, no clue how to get here by public transport.

How do you live in a fairy tale?

After spending a week in the Austrian Alps, we moved to Bavaria, to the Northern Limestone Alps to the small village of Oberamergau. The road to our new temporary home is one solid attraction. You can admire the mountains on both sides of the road.

READ
The sights of Rennes.

The elegant village, 90 km from Munich

The village of Oberammergau is ideally situated 90 km from Munich on the route of the tour buses from Munich to the castles of Neuschwanstein and Hoheschwangau. The village is famous for its painted houses. Each house is painted with paintings and fairy tales. The colors in which.

The fairytale village Oberammergau – art gallery in the open air

We were in the village of Oberammergau at the suggestion of our guide, and I was very happy to see this fairy tale under the open sky. As we drove into the village, the scenery outside the window struck us with some unreal colors. But.

The village of Oberammergau is known primarily for its theatrical performances about the suffering and death of Christ. They all go back to the 17th century when, after a terrible plague epidemic, the villagers promised to reproduce the pages of the Bible that described them.