What to see in Antalya in one day? 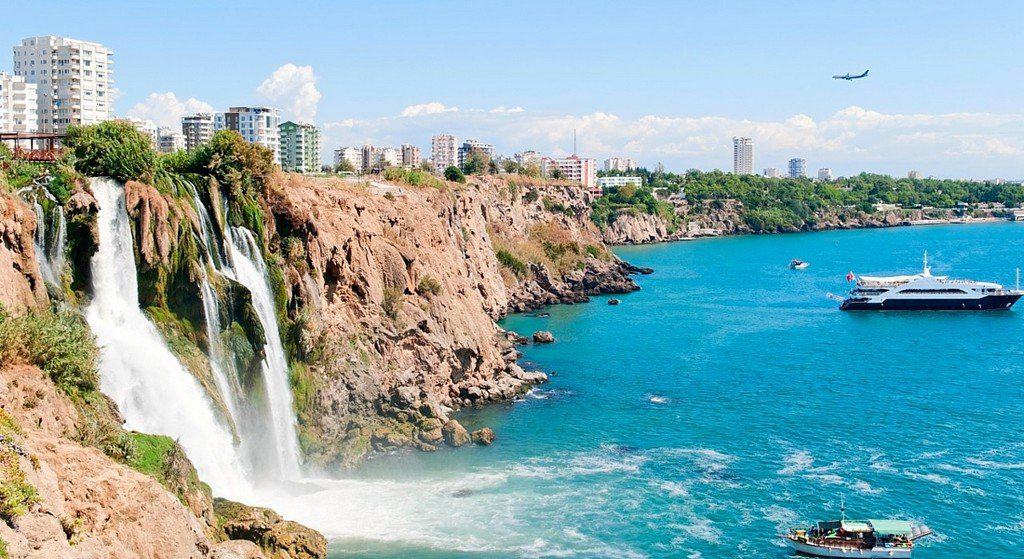 When coming to Turkey, tourists should not forget that this is an ancient country, and in every city there will certainly be a lot of interesting sights. All the more so a large resort like Antalya, the area which is equal to St. Petersburg, is rich in historical, cultural and sacred buildings. You have to try very hard to for one day to see the most interesting of what this city has to offer.

Itinerary for 1 day in Antalya 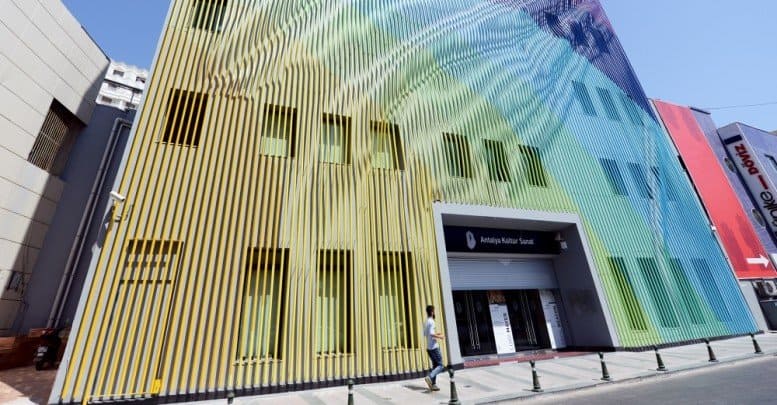 Antalya does not have its own Hermitage or Prado, but here is a place that will help start the day with a vivid experience.

It’s hard not to notice the colorful facade of the Culture and Arts Center that graced the city in the summer of 2015. Exhibitions of Western European and North American photographers and artists of such caliber as P. Picasso or E. Warhol are constantly held here. 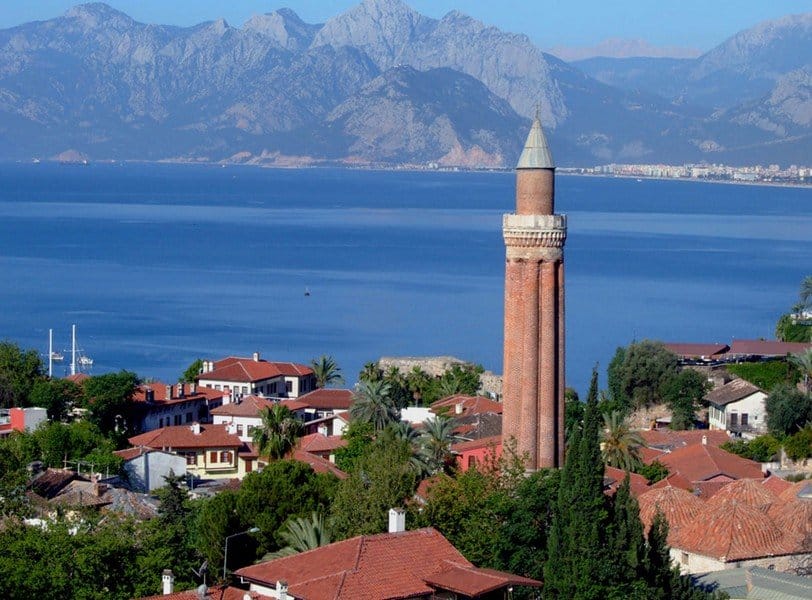 Among the sacral structures of Antalya stands out the symbol of the city. It is usually said about the 38-meter-high Yivli Minaret, which towers above the nearby mosque and other buildings of the old quarter.

Its architectural feature is its fluted surface painted with traditional Islamic mosaics.

The minaret, which was built in 1230, is one of the oldest in Antalya. 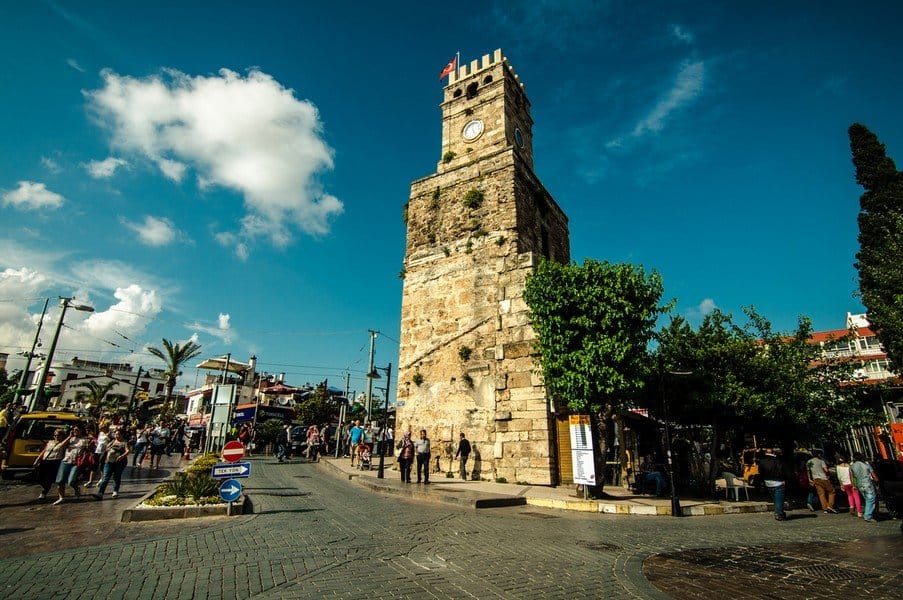 After walking a few meters from the minaret, tourists find themselves next to another symbol of the city. Unlike most of the buildings in the old quarter, the 14-meter clock tower is a relatively new landmark of the resort.

Saat Kulesi, the Turkish name for the structure, appeared here in 1901. 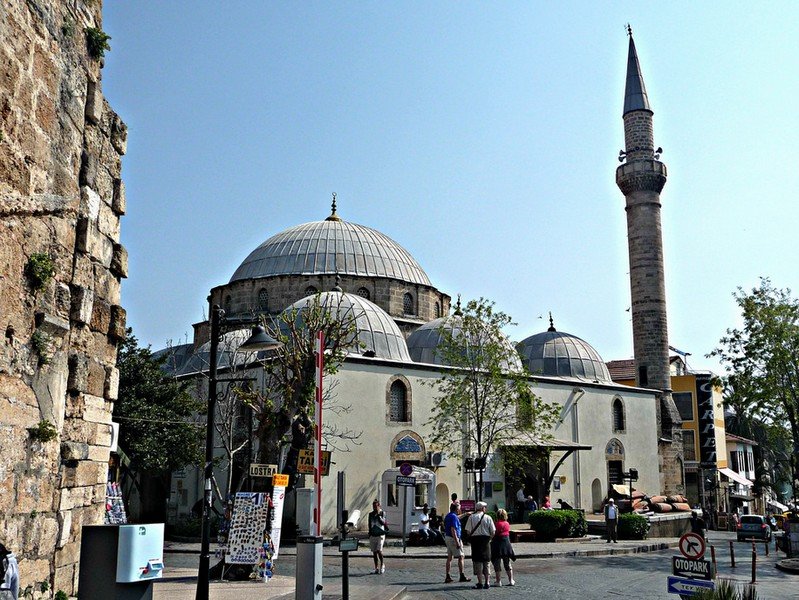 Next to the clock tower is a modest sacral building. Tourists know it as the “City Mosque”.

Once inside Tekeli Mehmet Pasha, as the name sounds in Turkish, visitors find themselves in a spacious room that is beautifully lit by the sunlight streaming through the exquisitely painted stained glass windows. 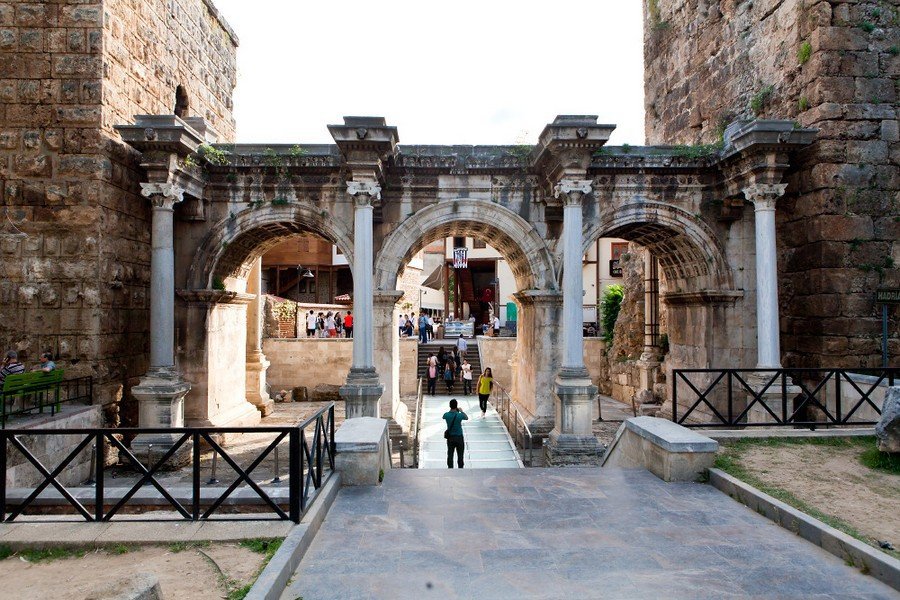 There are not many historical monuments left in the city that remind one of the period when Antalya was part of the Roman Empire. The well-preserved ‘Hadrian’s Gate’ has been one of the main attractions of Antalya for more than 19 centuries.

READ
Nuweiba in Egypt, a detailed description of the resort

The majestic look of the structure is given by the two powerful towers and four decorative columns. The three-arch gateway is like a journey through time.

Here the citizens and tourists leave the new quarters and find themselves in old Antalya.

Travelers interested in history can see with their own eyes how the Ottoman Turks lived in the century before last. To do so, visit the museum of Suna and Innan Kıraç, where the interior of the housing of the citizens of that period is recreated with the help of antique furniture, carpets and utensils. Here mannequins reproduce the tea and coffee ceremonies typical of Turkish families in the 18th and 19th centuries. 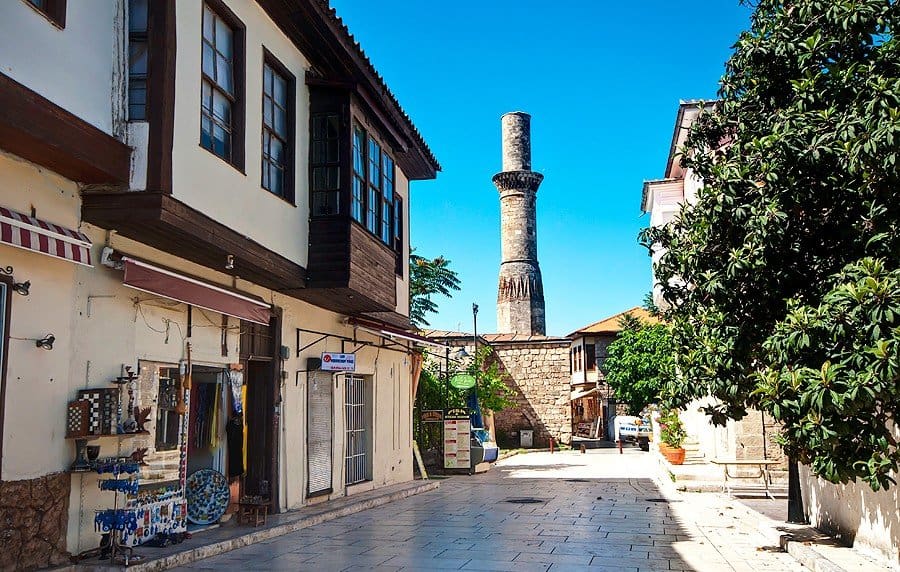 Tourists can hardly fit a trip to Perga, the remains of an ancient city, into a one-day introduction to Antalya. To get to it, you have to spend a lot of time.

The truncated minaret and the ruins of an ancient mosque are very close to the museum.

The Kesik Minaret, the Turkish name of the building, has a long and complicated history. The mosque that existed there was destroyed in a great earthquake. The minaret was also damaged and lost its top. 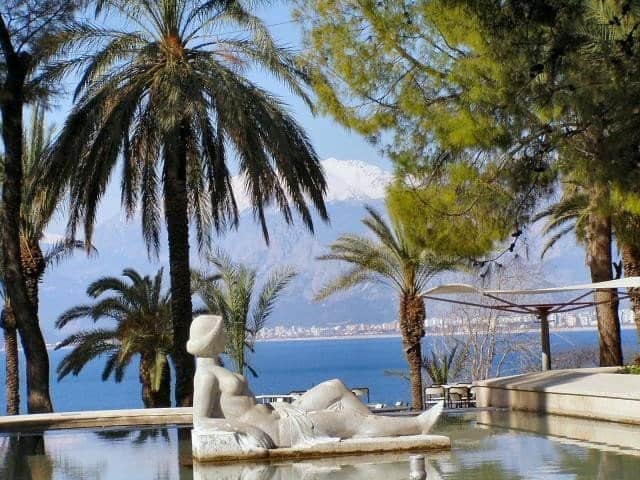 It is worth choosing one of the quiet and picturesque places to end your walk in Antalya. The best place for this is Karaalioglu, a large park not far from the Kesik Minaret.

Its advantage is the location on the high coast, which allowed to equip it with two viewing platforms.

The park is decorated with many palm trees, pine trees, mandarin trees, several fountains and bizarre sculptures. Here you can relax on the benches as well as in an outdoor cafe.

What to visit with children

With young travelers in Antalya too will not get bored. 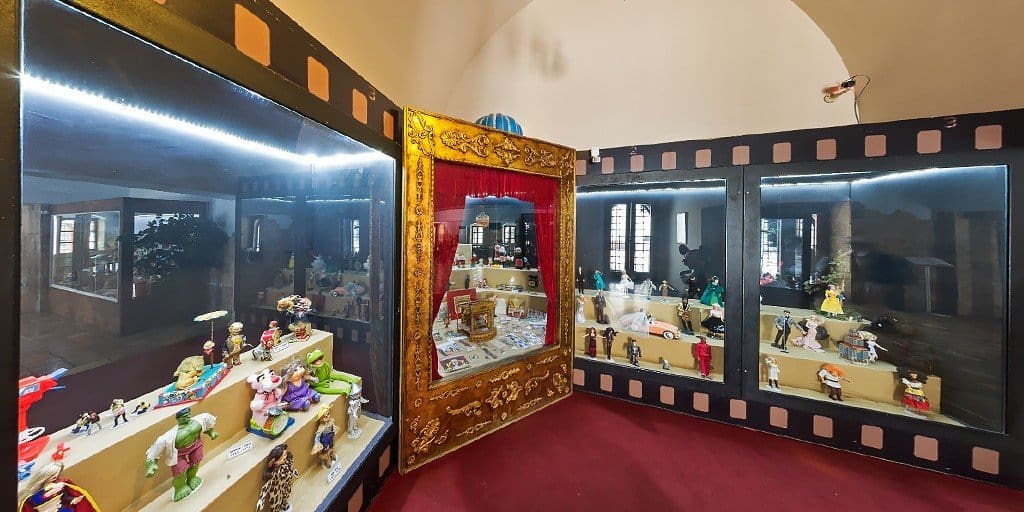 Start your itinerary with the Toy Museum, located near the marina. An inconspicuous institution is not easy to find because of the café tables and market stalls standing in front of it. But after the search the tourists are rewarded with a rich collection of dolls, cars and toys from Turkish provinces, the U.S., China, Britain and even Russia. 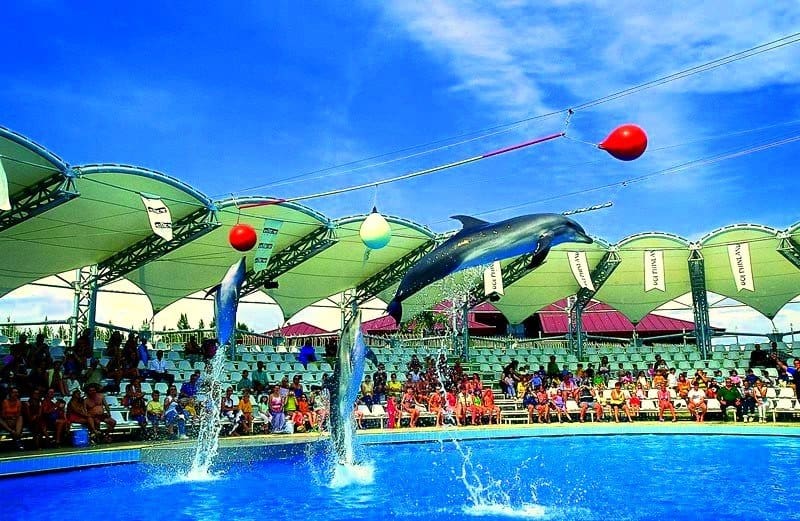 After visiting the museum you could go to Aqualand, a popular city water park, and then come to the Yivli Minaret and continue your stroll around Antalya.

At Aqualand, young tourists have fun on 6 slides, watch movies in a 7D movie theater or swim in a small children’s pool.

In the dolphinarium, twice a day, there are colorful performances. Their “artists” are playful dolphins, swift seals and funny seals. 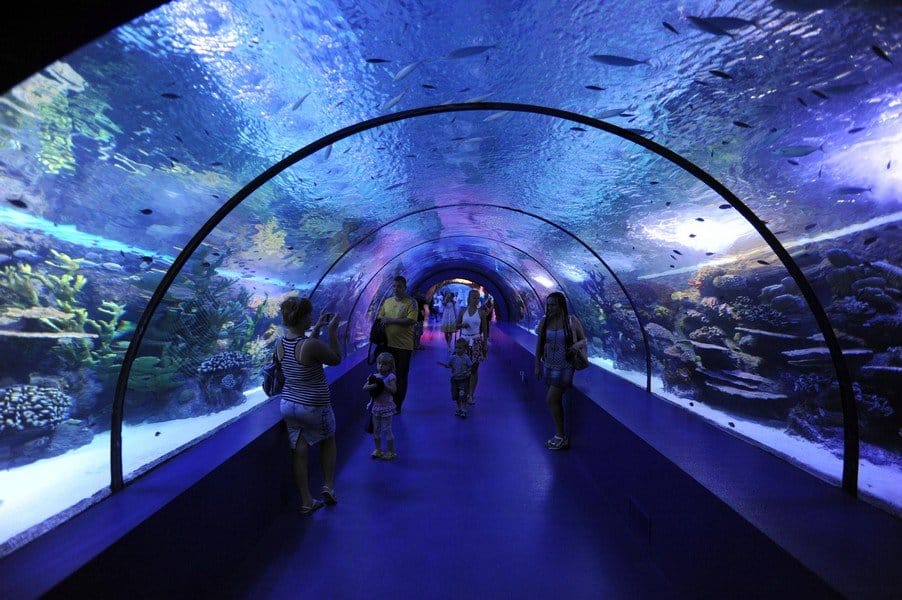 Opposite Aqualand is located “possessions” of the oceanarium. There, young visitors are introduced to the sea inhabitants in 40 aquariums. In a long transparent tunnel one can watch peace-loving sharks swimming. If you see a snowman figure in one of the rooms and want to take a ride in a sled, then you can do this in the “Snow World”, a separate entertainment area.

What to see in Antalya in one day?

Antalya – one of the most famous resorts in Turkey – is one of the ten largest cities in the country. It has a population of over 1.2 million people. The area of the city is 1417 square kilometers. By this measure, Antalya is comparable to St. Petersburg. The city, founded in 159 B.C., is rich in historical, cultural and sacral objects. The tourists who stayed at the resort for only a day, there is a logical question, what to see in Antalya in one day by yourself.

A few simple tips for tourists

Before starting to get acquainted with the main resort of the country, tourists should listen to the recommendations of travelers who know the city well. Experts advise adhering to several important rules to make a short self-guided tour interesting and useful:

Below is one possible itinerary, compiled according to the recommendations of experts. All the sites included in it can be seen in Antalya in 1 day. Inquisitive travelers will not have to hustle and bustle.

Most often, visitors to Antalya begin their acquaintance with the city in the famous Kaleici. The compact old town is always a great place to explore on foot. The neighborhood looks its best in the early morning hours, when it’s quiet, peaceful, and serene. 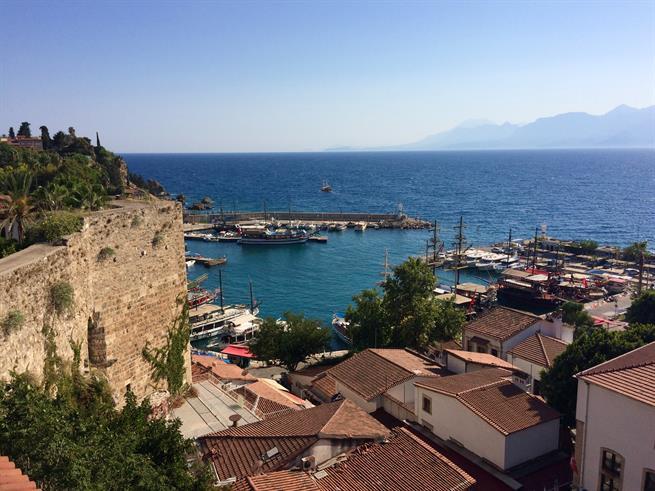 The first thing you see in the Old City is the 38-meter-high Yivli Minaret. The construction of this masterpiece of Islamic architecture was finished in 1230. Later, in 1373, the structure underwent considerable reconstruction. “The minaret is called the fluted minaret because of its uneven surface divided into 8 half-cylinders.

Tourists should climb the sheref. This is the name of the small balcony on the top. It is accessed by a 90-step spiral staircase. From the balcony travelers will see almost all the buildings of Kaleici, as well as the buildings of the neighboring neighborhoods. Near the Yivli Minaret stands the Clock Tower. Near Saat Kulesi, the name of the two-tiered structure built in 1901, couples in love make dates on summer evenings. 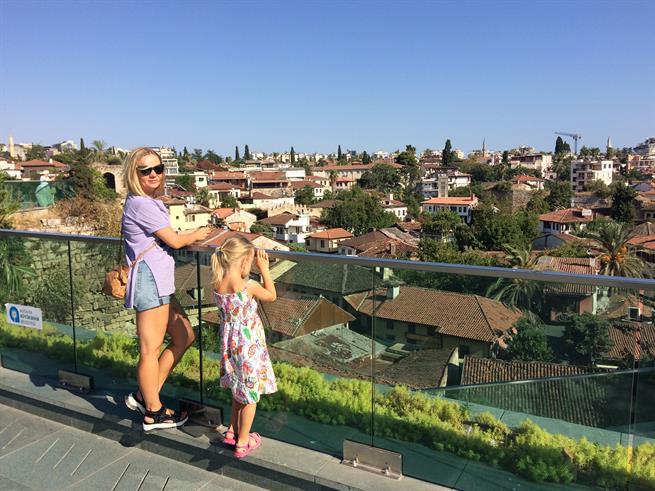 One of the most significant ancient structures of Kaleici is the Hadrian’s Gate. The structure includes three vaulted arches and two mighty towers. The gate, which was built in honor of the Roman emperor after his visit to the city in 130 AD, was once part of a massive fortress wall, of which only fragments remain. The height of the structure is 8 meters.

The famous “Broken” minaret is another prominent building of Kaleici. Another name of the Islamic construction – Kesik. Until 1896 the minaret was part of the mosque. A fire destroyed the Islamic temple. In 2019, the restoration of the top of the minaret was completed, so the name “Broken” no longer corresponds to reality.

READ
Akçay in Turkey and the sights of the resort

The last significant object of Kaleici is Khydirlik Tower. The construction was erected by the Romans in the II century. Scientists assume that the tower played the role of a lighthouse or a tomb. The height of the round massive building is 13,5 m. 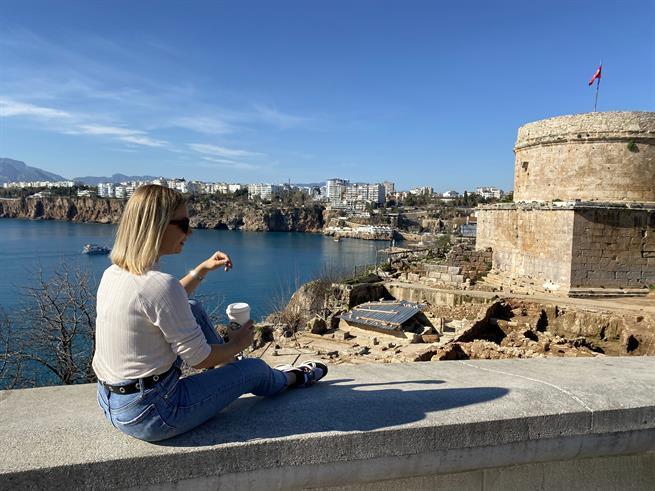 Next to Kıdırlık Tower is a giant green oasis. It is a favorite of Anatolians and visitors to the city, Karaalioglu Park. Here you can take long walks along the well-groomed alleys and paths between the flowerbeds, original statues and elegant fountains. 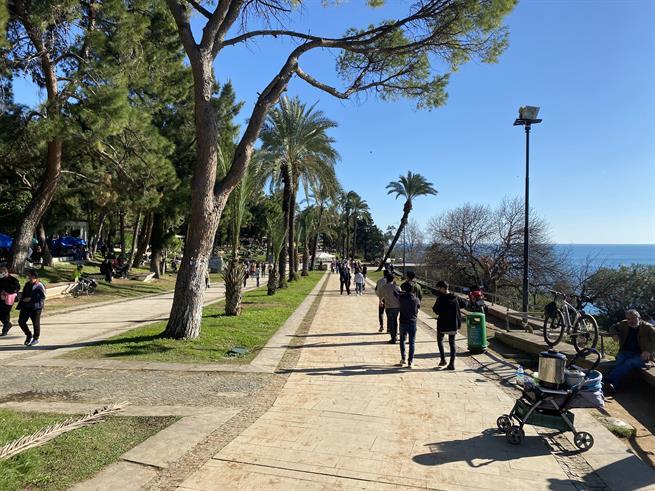 Part of the park occupies a cozy botanical garden, where there are branching palms, fluffy pines, mandarin, orange and other trees. Decorations of this green corner are numerous statues. Among them stands out an interesting art object – funny frogs, as well as an unusual monument to the literary hero – Don Quixote. 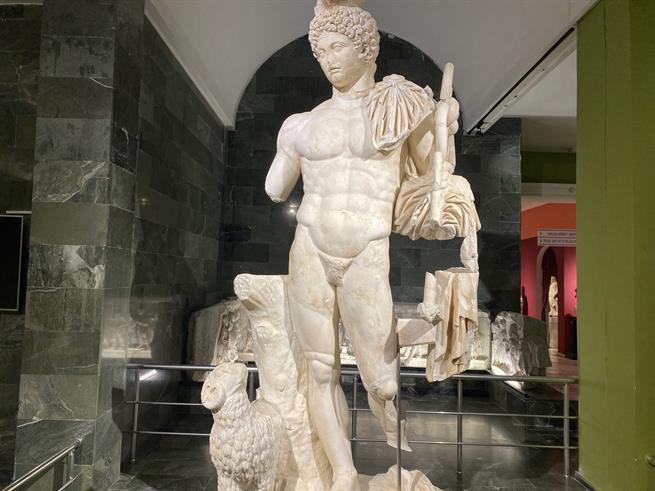 Now the historical and cultural institution houses 13 spacious halls, which holds more than 5000 exhibits. The sarcophagi, coins, weapons, as well as ancient statues of gods and mythological characters: Asclepius, Zeus, Minerva, Hermes, Marsius and others are of the greatest interest to art lovers.

In Ataturk Park there is a whole “Water Country” – so you can translate the name of the water park. It occupies an area of 36 thousand square meters. The greatest interest among visitors of all ages causes two water slides: the “Black Hole” and the “Giant”. Each of the slides is 100 meters long. There is also a dolphinarium in the water park, where bright performances with talented sea animals are held every day. Dolphins and seals perform such tricks that amaze both adults and children.

After the show at the water park, you can go back to the stop and take a long streetcar ride towards Kaleici. At the intersection of two streets, Jumhuriyet and Ataturk, you should change to another streetcar and go northwest towards the zoo. The end stop is Fatih. Not far from it are the “possessions” of the Antalya Zoo. 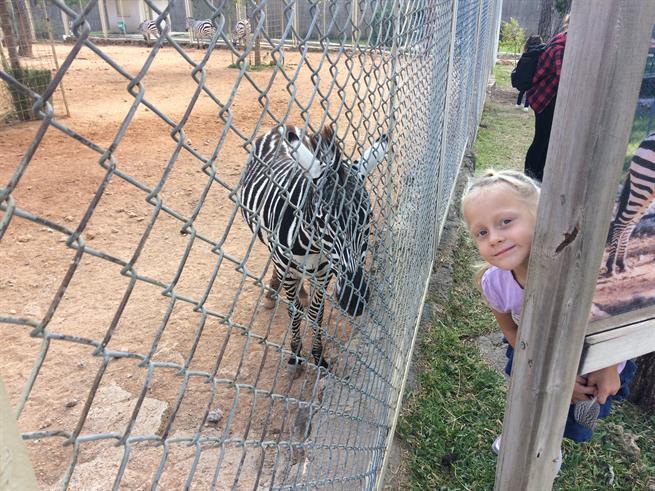 It is impossible to see Antalya in just one day. But getting to know the most interesting places will help you get to know the city, its history, people, and atmosphere better. After a one-day self-guided tour, visitors to Antalya will undoubtedly have a desire to continue their walk through the picturesque resort. Tourists should also be aware that the most favorable conditions for learning about the city are in May, June and the first half of autumn.

All the best tours to Turkey at the most affordable prices you’ll find on the Travelata website. And by installing the App for selecting tours on your phone, you will always be aware of promotions and special offers for all tourist destinations (download in AppStore or GooglePlay).

Here you can find the hottest tours to Turkey in the near future at the lowest prices.

Also you can pick up a tour to Turkey with a flight from your city and with the most convenient dates for you.