The White Cliffs of Dover are a beautiful natural monument, located in the south-eastern part of the United Kingdom, on the territory of the county of Kent. The White Cliffs line the shore of the Pas de Calais and extend west and east from the ancient port city of Dover. For centuries it has served as a reliable landmark for all ships on their way to Britain. Sailors can be sure that the British coastline is only a short distance away when they spot the white cliffs in the distance. It is because of the white-colored cliffs that the coast of England became known as Foggy Albion, because in Latin albus means “white.”

The high cliffs were formed during the late Cretaceous era. The limestone deposits, up to 107 m thick, are the remains of marine animals that lined the bottom of the ancient sea layer by layer over millions of years. Layers of white chalk alternate with bands of dark silica.

The impregnable cliffs are the object of English folklore. Many songs and folk tales are written about them. The picturesque high cliffs are sung by poets, and their images can be seen in the paintings of many famous artists.

White cliffs Dover has long been one of the popular tourist attractions, which attracts many travelers from Britain itself, and from abroad. A stroll along the coastline is a must on any tour itinerary in Kent.

The best time to come here is from late spring to early fall, because there are always freezing winds along the coast during the cold season. Also keep in mind that after the rains, the paths over the White Cliffs can be quite muddy.

The cliffs above the sea are constantly affected by strong coastal erosion. They are eroded by the sun, plant roots, coastal winds, and sea surf. Millimeter by millimeter, the land slowly recedes and the cliffs leave the remnants of what are known here as the white “lighthouses” of Dover.

Plants that can only be found on the chalk soils are well studied by botanists. They are called calcephilous. The abundance of flowers over the coastal ledges was noted back in the reign of Queen Elizabeth I. The famous English scientist William Turner, who lived at that time, came to the White Cliffs of Dover on purpose, and compiled a complete description of the species found there. To this day, hikers on the trails can admire yellow and sapphire glaciums, as well as several species of wild orchids.

The coastal city of Dover was of strategic importance to the British, because the neighboring mainland state – France – is only 34 km away. The castle was built above the White Cliffs of Dover at an altitude of 114 meters above sea level. It enjoyed the constant attention of the British monarchs and was called the Key of England.

The ancient fortifications are considered an important monument of fortification art. A serious reconstruction of the castle was carried out in the early 19th century, during the Napoleonic Wars. In addition to strengthening the outer walls, at a depth of 15 m a system of tunnels was dug in the chalk. During the Second World War the underground tunnels under the Dover Castle were a bomb shelter, and in later times – the command post and a military hospital. Today the castle is open as a museum.

The White Cliffs are near the English town of Dover, in the county of Kent. Near the cliffs lies one of the most important roads in Britain – the A-20 freeway. From London, the A-2 freeway leads to Dover, so it is not difficult to come here by car.

Travelers who go to the coast by public transport can take one of two options. The cheaper and longer one is to get to Dover in 2-3 hours by National Express buses, which leave from London’s Victoria Coach Station. Alternatively, you can come to Dover by train. The train journey takes just over an hour. Trains to the coast run from two London stations – Charing Cross and St Pancras International. 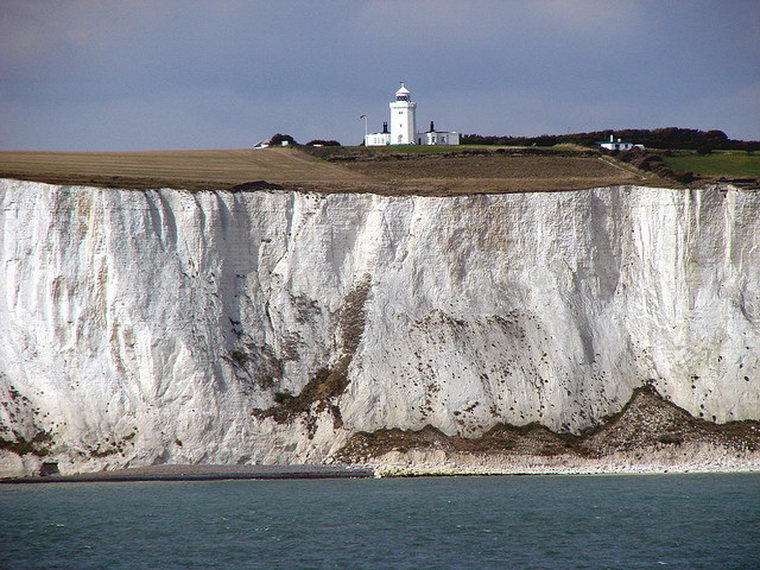 It’s no secret that northern France is separated from southern England by the English Channel (sometimes called the English Channel). The narrowest part of this strait, with a width of just over 33 kilometers, is called the Strait of Dover. It is here that the White Cliffs are located. In clear weather they can be seen even from the coast of France.

The white band of cliffs stretches for about 13 kilometers to the east and west of Dover. But the most impressive part is to the east of the city. About 3.5 kilometers of coastline here is a solid white wall. The height of the cliffs reaches 110 meters. 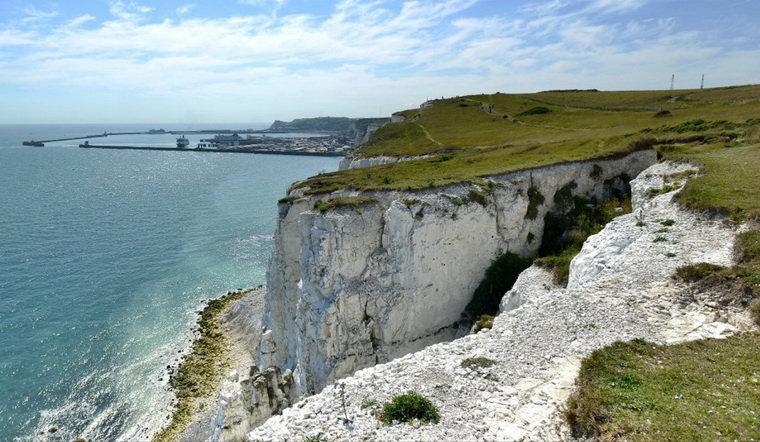 How did the White Cliffs of Dover come to be?

The White Cliffs are part of the natural formation of the North Downs. As you realized, the cliffs got their name because of their color. It, in turn, is due to the presence of chalk in the rocks. And its content tends to 100%. An interesting feature of the White Rocks is the inclusions of black flint.

The formation of the White Rocks has been going on for a very long time. About seventy million years ago Britain and most of Europe were at the bottom of the ocean, which consisted of white mud. It consisted mainly of fragments of coccoliths (these are particles of calcium carbonate formed by microscopic algae), with a small admixture of remains of plankton and small crustaceans.

The sediments are thought to have accumulated very slowly. Probably not more than half a millimeter per year, which is equivalent to about 180 coccoliths stacked one on top of the other. Nevertheless, in some places these deposits formed Cretaceous layers up to 500 meters thick.

READ
Iceland's Black Beach. This is the entire south coast of the island

Later, during the movement of the Earth’s crust, the bottom lowered, and water separated the continent and the island.

On the opposite side of the White Cliffs, on the other side of La Mancha, similar geological structures can be found. And if you go to the town of Etreta in the north of France in the region of Haute Normandie, you will find very similar chalk cliffs. This fact proves that in prehistoric times there was a land link between the mainland and the modern island.

White rocks are a real source of knowledge for biologists, historians and geologists. The layers of chalk, which are tens, if not hundreds of millions of years old, reveal the mysteries of the universe. Various ancient fossils such as brachiopods, bivalves, crinoids, sponges and many others have been found in the deposits. Ancient shark teeth have even been found here. All these, of course, are extremely important artifacts for scientists. 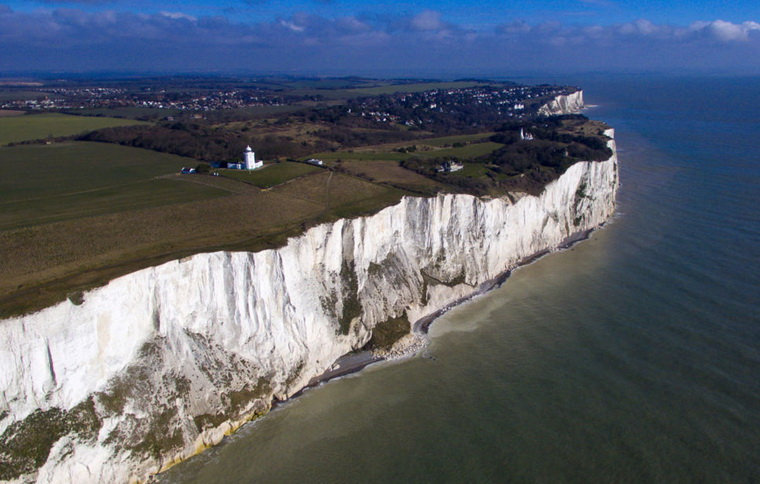 Due to global geological processes occurring in the Earth’s crust, the White Cliffs are now sinking at a rate of about 1 cm per year. Because of the fragile structure of the chalk, sometimes quite significant pieces fall off the rocks. For example, in 2001, a piece of rock the size of a soccer field broke away, and in 2012 another huge piece.

Tourists are urged to stay away from the edge of the cliff. 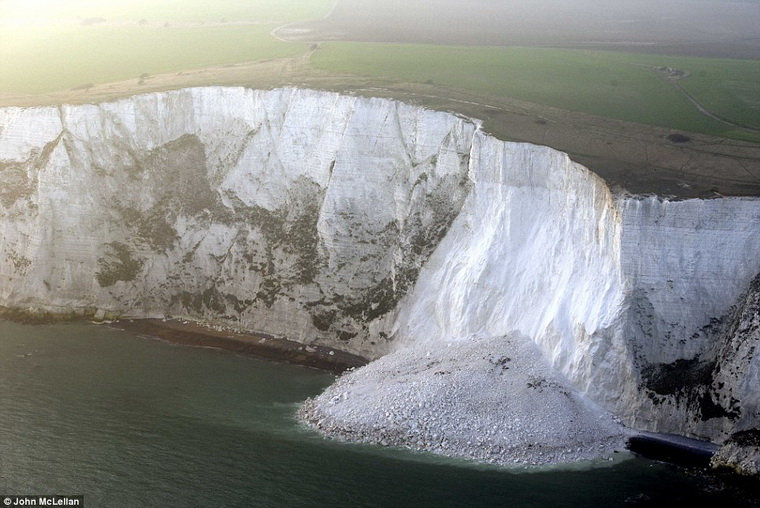 The consequences of one of the rockslides

The White Cliffs are often called the gateway to England, because it is the first place people see when arriving on the island by sea. Keep in mind, it is the narrowest part of the strait most suitable for crossing from the mainland.

This stretch of coast is very important geographically. Both World War I and World War II saw significant battles fought here. You can see reminders of this in the World War II shelters made right into the chalk cliffs.

There’s also the medieval Castle of Dover nearby. It was founded in the 11th century and is described as the “Key to England” because of its defensive importance throughout history. It is the largest castle in England. 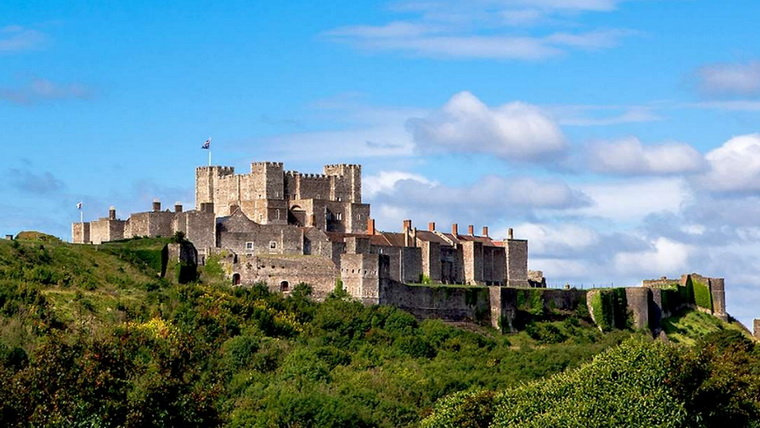 Don’t forget to visit the Dover Museum. Here you’ll see an ancient boat made of bronze, dating back to the early 16th century.

South Forland Lighthouse is a Victorian-era lighthouse in St. Margaret’s Bay. It was once used to warn ships approaching the dangerous Goodwin Sands northeast of Dover. The lighthouse has been out of service since 1988, but serves as an interesting landmark. 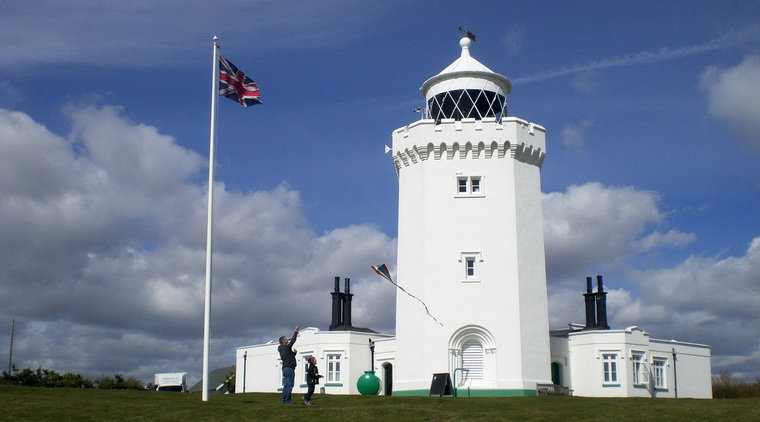