The white sands are the sugar desert of New Mexico. USA

White sands are actually an indispensable attribute of paradisiacal beaches. Open a page about Hyams Beach in Australia and make sure of it, maybe even compare it to the benchmark of white sand, kept in the House of Measures and Scales (just kidding, so far the benchmark is not there).

But there is a place in the world where the white sands are hundreds of miles from the nearest ocean. You guessed it – it’s a desert. Yes, not the biggest in the world, but certainly one of the most interesting.

White Sands Desert on the map

The desert in numbers 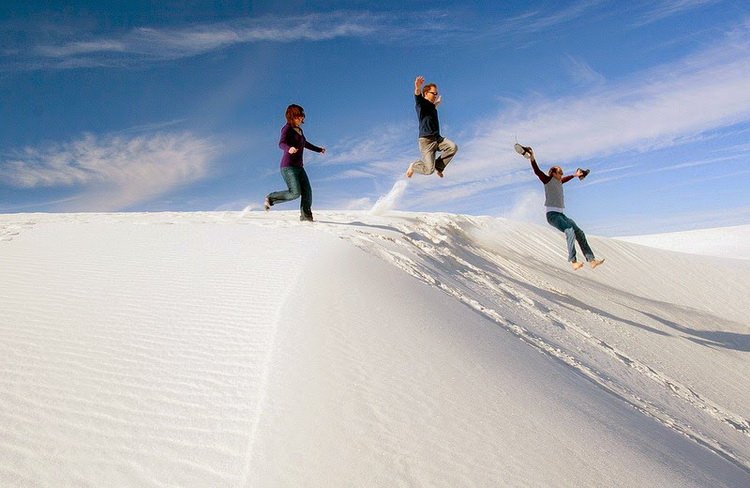 What is White Sands and where did it come from

This place is enlisted in the world’s landmarks, not only for its amazing white color, but also for the composition of the “sand.” The word sand is taken in quotes, because technically it is not sand at all, but … gypsum. Where did hundreds of square kilometers of the material come from? And the chemical labs had nothing to do with it. It’s another one of the Grand Trickster’s tricks.

READ
The Bacalar Lagoon is a tourist and pirate's paradise.

Nature created such an interesting desert over millions of years. And here’s how (at least that’s what scientists think). About 100 million years ago (give or take a couple of years) during the Cretaceous period, there was a small sea in this place. In the process of terraforming, the sea gradually turned into several lakes, which, in turn, dried up and left on the surface the usual salt and selenite (which is actually one of the varieties of gypsum).

Then mountains were formed here from layers of gypsum. Wind and water gradually blew and washed the selenite out of the rocks and carried the particles down into the valley. Eventually this interesting terrain was formed here, which at first glance seems to have snow and cold reigning here. 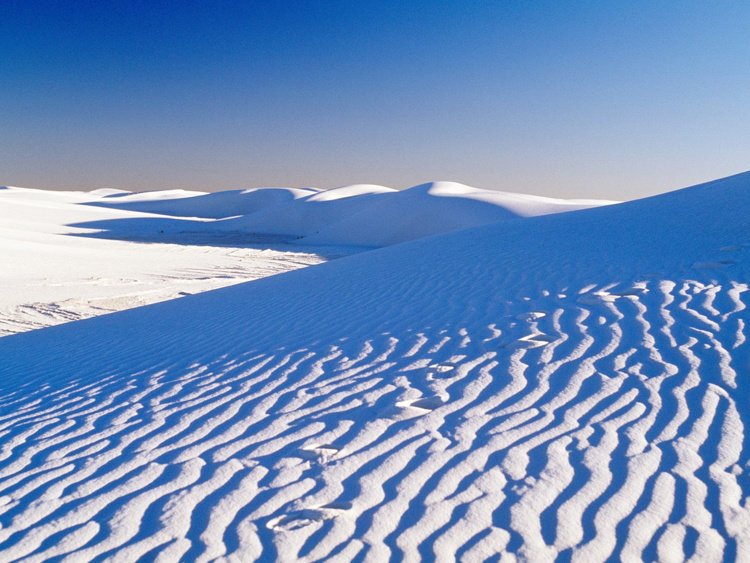 No, it’s not in Antarctica.

As you can see, it’s unscientific to talk about sand here. But we will probably use the word “sand” in this article from time to time, so don’t scold us too much.

I must say that this is not the only white desert in the world. In Brazil, for example, there are interesting snow-white hills of the Lencoise-Maranhães. They, too, can easily be confused with the snow-covered landscapes of the far north. But this place certainly does not smell of selenite – all hills and dunes are made of real sand.

The White Sands Desert is also known as the “Porcelain Desert. This is how it was called by the local Apache Indians, naturally for the dazzling color of its sands. 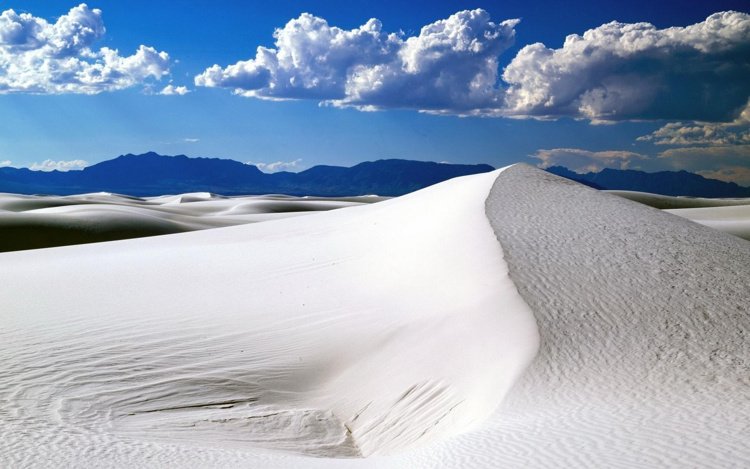 The plaster dunes of the Porcelain Desert

Because of the chemical composition of the desert sand and the constant movement of the selenite masses, plant and animal life here is quite sparse. Only yucca and some species of poplars with root system going down to the depth of 30 meters survived.

Of wildlife, there are lizards, sack rats and a few species of birds of prey. Basically, all life boils on the outskirts of the desert. Both plants and animals are much more abundant there, both in number and diversity. 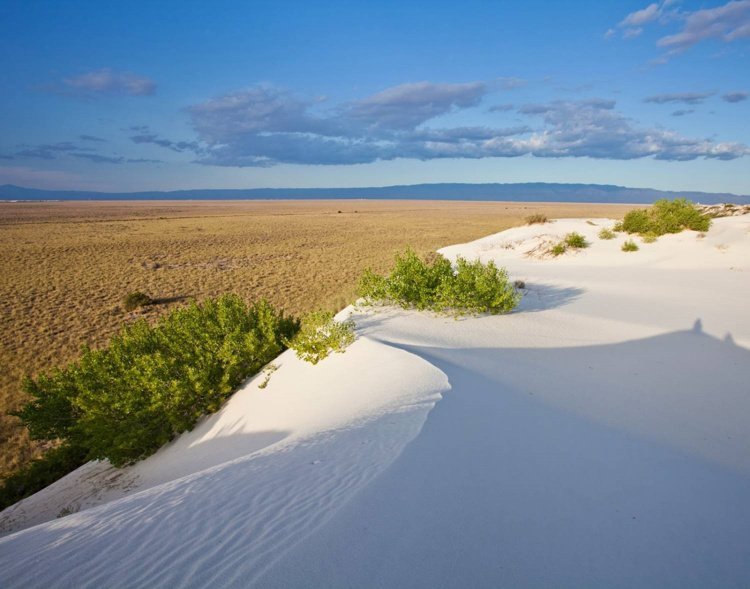 The edge of the Porcelain Desert

If you’re not indifferent to deserts, there’s another one worth knowing about. There’s a charmingly frightening desert in Namibia with the “uplifting” name of Dead Valley. Dried trees on the background of golden sands create unreal scenery. If you have time, read about it, the link is just above.

White Sands National Park in New Mexico in the southwestern United States is a very unusual place. It is located near the town of Alamogordo, which has its own sad history. It is a place that has changed the history of mankind, although no one knows about it.

White Sands National Park is the most amazing park in the southern United States in the Chihuahua desert with its gypsum-crumb sand dunes. It has so much dazzling white sand that it is as difficult to walk there without sunglasses as it is in the Maldives. We stopped by the White Sands Park to see for ourselves its beauty and to check out why it is so interesting to tourists and how difficult it is to hike there. To do this, we went on a hike among the sand dunes.

Alamogordo, where the old world has changed

On the way to White Sands Park, we drove through the town of Alamogordo, where the atomic bomb was developed. Few people, upon hearing the name of the town, will say exactly what happened here in 1945. But had it not been for the Los Alamos laboratories and the Alamogordo test site, perhaps Hiroshima and Nagasaki would never have happened.

I want to believe that. But reason tells us that the atomic bomb must have been made at Los Alamos and detonated at the Alamogordo test site to remake the old world. To destroy it and start building a new one.

The explosion was done in a remote and sparsely populated place in New Mexico, in the White Sands Desert, where White Sands National Park is located today. Tests are still conducted there to this day. True, now it is just various military planes and other military equipment.

However, on the days of testing, the park’s official website says that it is closed (or rather, the main trails into the sands are closed, and why would you come to the desert and not see it?). Highway 70, which goes by the park, from the city of Alamogordo to Las Cruces is also being closed. The signs say this: when the lights are on (like at a railroad crossing), the highway is closed, and no one is allowed into White Sands National Park.

They usually close it for an hour or an hour and a half. So check before you visit to see how things are going on the highway.

Recommendation: We choose the best-priced car for a trip to the U.S. at rentalcars.com →

In the park, you can basically stop at any permitted location. The fact is that almost immediately after the booth and until the moment when the sand completely covers the asphalt, you enter the war zone and for your safety it is strictly prohibited to stop there. That’s what the road sign says. But after that you are welcome. That is, you can park anywhere at the dunes and view them at your own discretion and at your own risk. As photographers who want to find fresh spots for their masterpieces do.

READ
The Thule tree is the thickest tree in the world. Mexico.

The military occupies most of the desert, because they are the masters here to this day, and a small part of it is given to the national park. And along the road at first you even see bodies of water. But as you drive further into White Sands National Park, you see semi-steppe and barchans on the horizon.

Then the plants, which have found the joy of life in this place, slowly climb the sands, but after a few meters the sands absorb everything, including the road. You suddenly feel like it’s winter, and you are somewhere in the far north of Russia. Usually there, the snow lies on the roadside, they remove it with cars, but it piles up in drifts. And the road is slippery. But the hot sun is shining through the window. You’re hot, and there’s snow and ice in front of your eyes. That’s it, reality is mixed, the brain refuses to work still. It’s about time to get out of the car, go to the snow-and-sand barchans and get lost.

The White Sands Park Visitor Center is open from 9 a.m. to 5 p.m. As always, you can get all kinds of information and see maps describing the park. The map informs you that there are several trails here. One of them, the Interdune boardwalk, was closed the day we arrived.

Another trail, the Dune Life Nature Trail is a short walk over the White Sands on a wooden platform. You can admire the sands and the plants sticking out of them, as well as read about them and the desert animals that live there.

We didn’t try the Playa trail and Backcountry camping trail and went straight to the Alkali flat trail. The trail is very distinguishable, and there are signs along it. If you walk obediently, there are no problems at all. But the only problem is that the trail is exhausted and there are a lot of people’s footsteps on dunes. And you want to see virgin sands, that’s what everybody goes to White Sands for…

Is it easy to get lost in the sands?

The sands are treacherous, yes. The desert leads away. One barkhan, another, and then it is not clear where to go back to. Light dizziness, scorching sun, mirage of reality… Is it worth coming back? Perhaps if the place wasn’t so evil, it would be better to stay in an eternal dream.

We dream. Of the sea that splashed here millions of years ago. About the lake that melted after the Ice Age. And about the unique white sand of White Sands that reminds us so much of snow. Time travel and escapism – what if Alamogordo, Los Alamos and the bomb didn’t exist? What kind of world would we be living in today?

Read our articles with recommendations on choosing hotels in different US cities:

My memories: The place is amazing! Amazing and unlike anything I’ve ever seen. And how scary it was to get lost there and then be found! The white snow is desolate-snowy. One should write poems about these dunes!