There are many interesting sights in Thailand and one of these places is the White Temple or Wat Rong Khun. This temple can hardly even be called a temple, rather a work of art that fascinates with its beauty. It gives the impression that you are in a fairy tale and a snow castle is in front of you. The temple is located a few kilometers from Chiang Rai, so if you are in these places, be sure to visit the White Temple in Thailand.

The territory of the temple is well maintained and well landscaped. There is a beautiful pond in which fish swim, as well as many fountains and sculptures of mythological creatures. Among all this beauty, it is nice to sit on a bench and take great pictures. 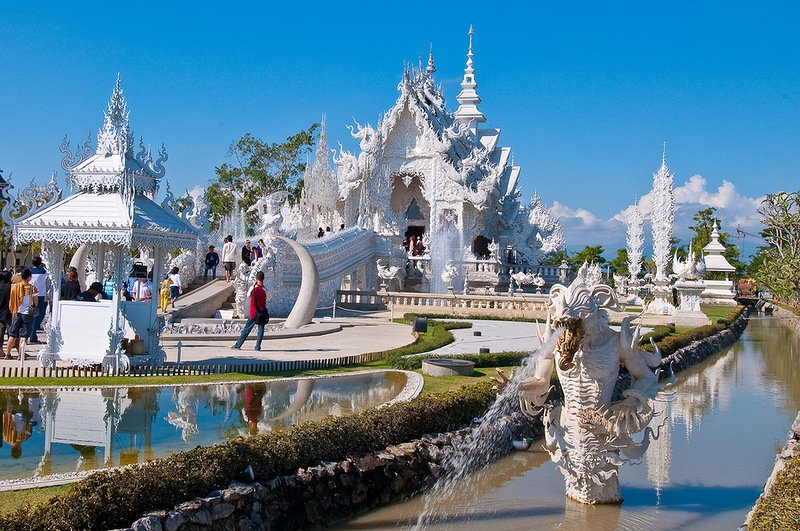 There are three buildings on the temple grounds at the moment: the White Temple, an art gallery, and a golden structure that looks like a small palace, which is actually a public restroom. I never would have thought that an ordinary toilet could be so beautiful. 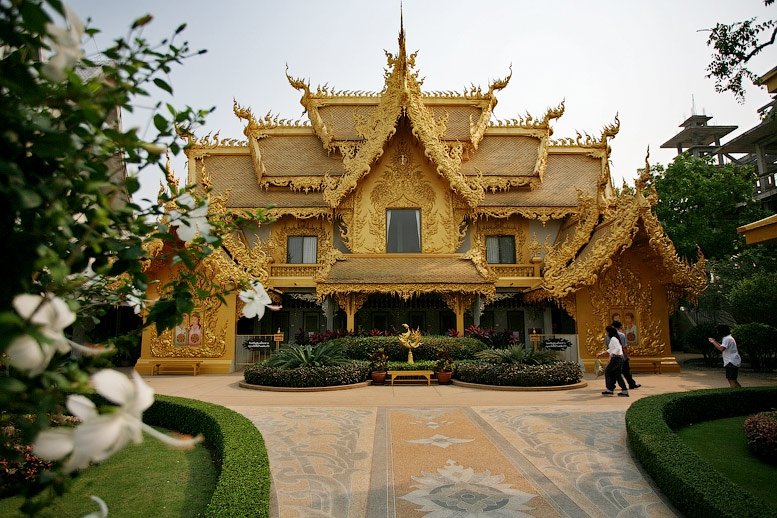 The owner has plans to build six more buildings. Construction has already begun on some of them.

Next to the temple complex is a souvenir shop where you can buy magnets, postcards and other things. There is also a cafe where you can eat.

The main building is the White Temple, which symbolizes Heaven, and to get to him to go through the secular world, full of temptations, and then through Hell with the reaching hands of sinners and the fangs of Rahu (mythical demon-snake). And only then you get to the bridge, which symbolizes the road to enlightenment, and leads to the temple. 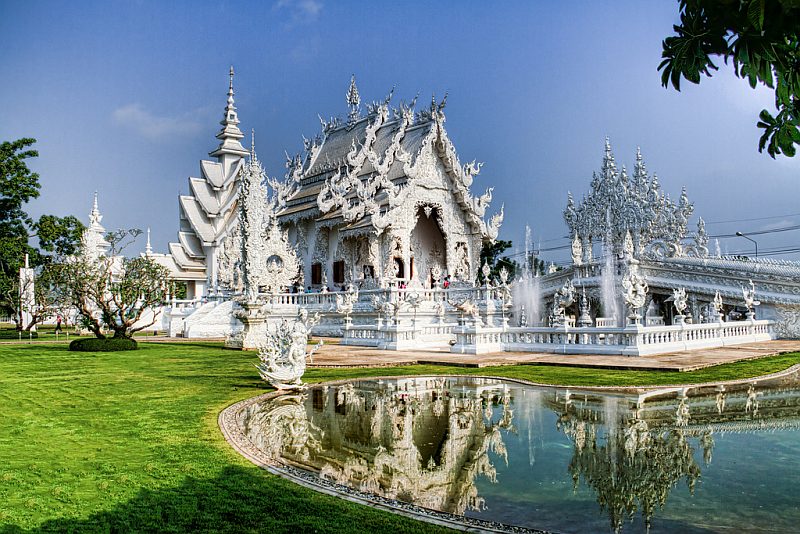 Hands of sinners Bridge of enlightenment

What’s inside the temple?

At the entrance to the White Temple there are signs that tell you that it is forbidden to take pictures inside the building. But despite this, there are quite a few pictures on the internet.

Once inside the temple, you realize that it is half-empty: just a lonely sitting statue of a monk and the painted walls around it. All the paintings are created by the owner of the temple and symbolize the constant war between good and evil. Here you can see various characters fighting for good: Superman, Batman, Avatar, Terminator, characters from the Matrix and many others. Also depicted on the walls are twin towers, rockets, weapons, spaceships. Over time, new paintings appear and many depict our modern life. 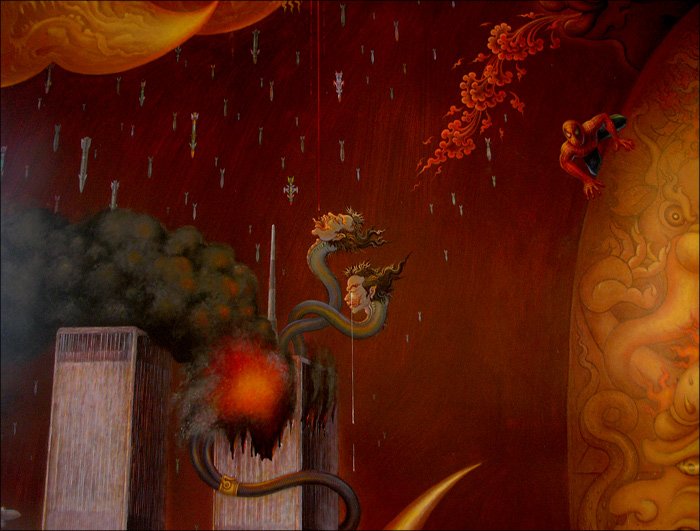 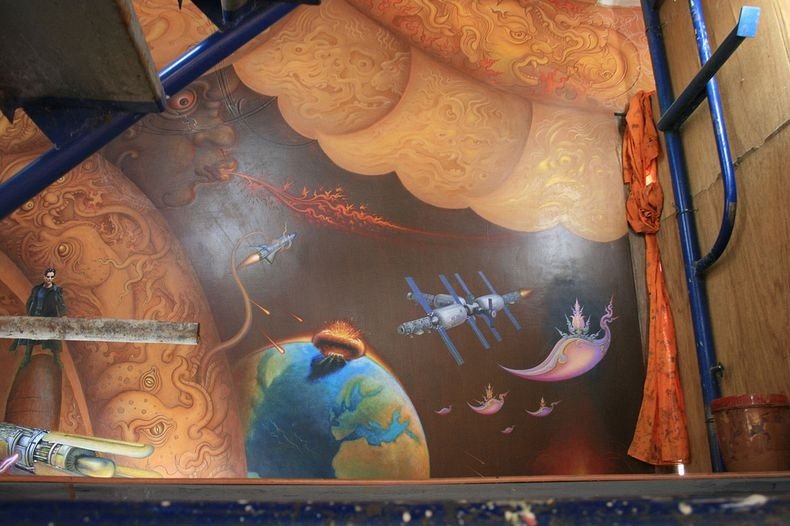 See the map for the exact location of the White Temple.

The temple is open 24 hours a day, seven days a week, admission is free.

As in any other Buddhist temple you should dress appropriately: knees and shoulders should be covered. If necessary you will be given pants, a skirt or a scarf at the entrance.

White Temple in Thailand is striking for its unusual beauty and many tourists come here from different countries. This place is definitely in the top 10 best attractions in Thailand.

The beaches of Thailand are wonderful, but the impression of the country would be incomplete without visiting the northern provinces. And especially their attractions. Wat Rong Khun (Wat Rong Khun) or, as it is often called, the White Temple, in the last decade has become one of the most popular in Thailand. Every year it attracts more and more tourists who want to see with their own eyes a snow-white wonder. 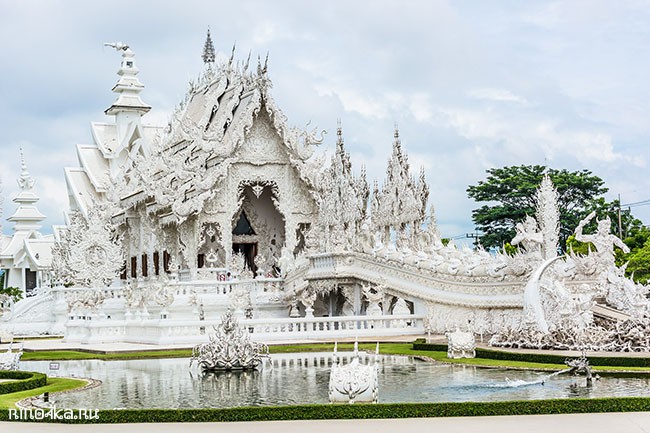 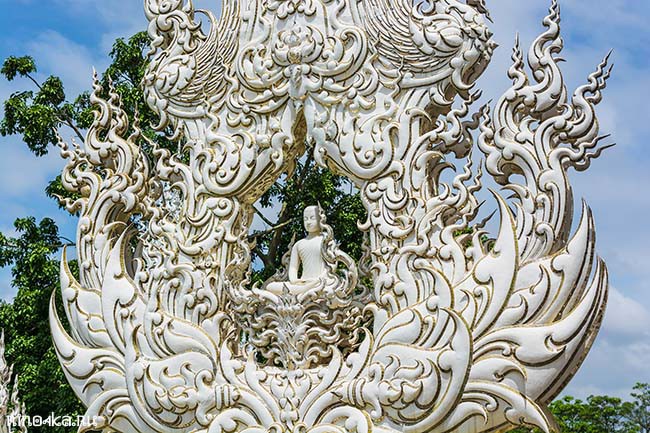 Some tourists deliberately bypass Wat Rong Khun: it’s a novelty, why see it? In fact, the significance of the temple is not in the age of construction, but in the symbolism of the idea. Every detail of the temple carries its own meaning and encourages visitors to reflect on the Buddhist teachings on worldly temptations, desires, greed, and their influence on people’s minds. 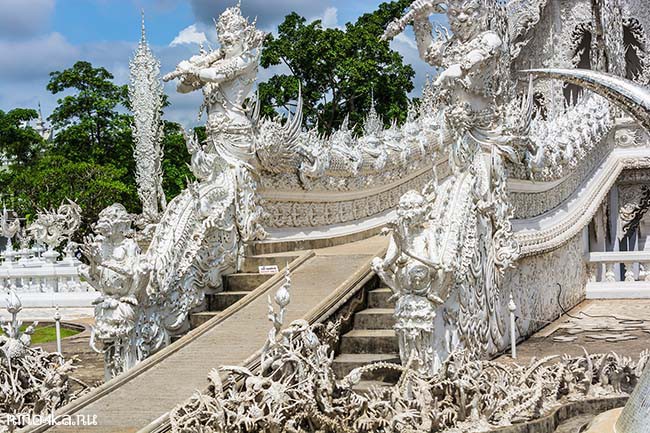 The design of the entire temple complex uses pieces of mirrors that sparkle in the sun. The temple’s white color represents the purity of the Buddha, and the mirrors symbolize the wisdom of the Buddha and Buddhist teachings. Wat Rong Khun was designed by a Thai artist named Chalermchai Kositpipat. Construction on the White Temple began in 1997 and is still going on. The temple is being built with Chalemchai Kositpipat’s personal money and donations, like the Big Buddha Temple in Phuket. The artist’s plan is to have nine buildings on the grounds, including a ubotsot, a hall with Buddhist relics, a meditation hall, living quarters for monks and an art gallery. Perhaps in 50 or 60 years we will see Wat Rong Khun in all its splendor.

READ
The My Son Temple Complex in Vietnam, description and photos 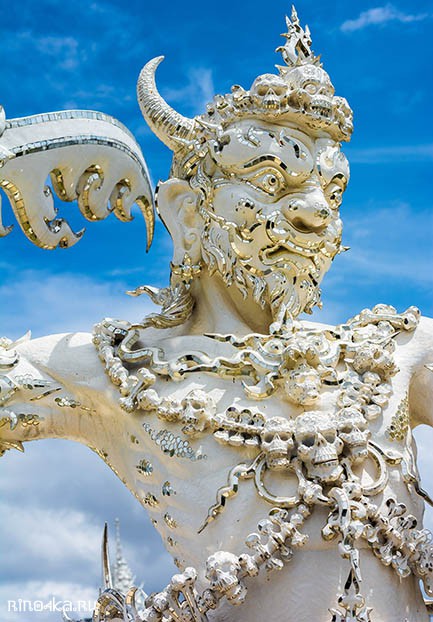 The centerpiece of the complex is the Ubotsot, the main building. Across the water is a bridge that symbolizes the cycle of rebirth. First, on either side of the bridge you will see hundreds of hands – these are desires, temptations, greed, human suffering and hell. The way to happiness is through overcoming such worldly things. Two huge demons guard the road to nirvana. 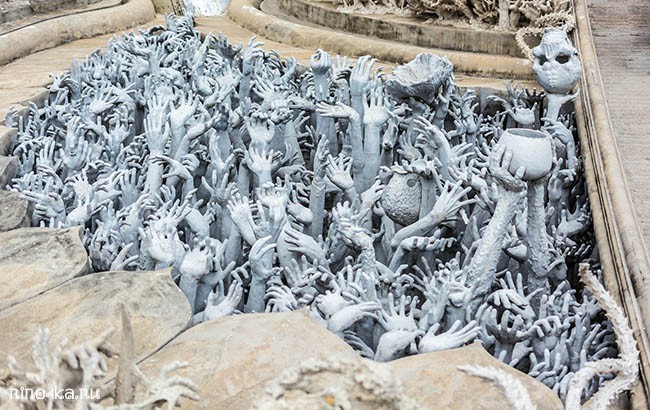 The main building is in the classical style of northern Thai temples with a three-tiered roof and Naga snakes. But if inside the ancient temples on the walls you can see murals with scenes from Buddhist history, in Wat Rong Khun depicts modern ideas of good and evil: Spider-Man, Neo from the Matrix, Batman, villains and superheroes from movies, comic books and real life. Here you can see the explosion of the American twin towers, an erupting volcano, nuclear missiles, and weapons. And, of course, images and a statue of Buddha. Inside the main building, photography and videotaping are prohibited. Reproductions of the murals can be purchased in the souvenir store. Wat Rong Khun is not the only temple in Thailand with such modern paintings. This is a new trend in modern temple painting, and this surrealistic vision of the world is extremely interesting. 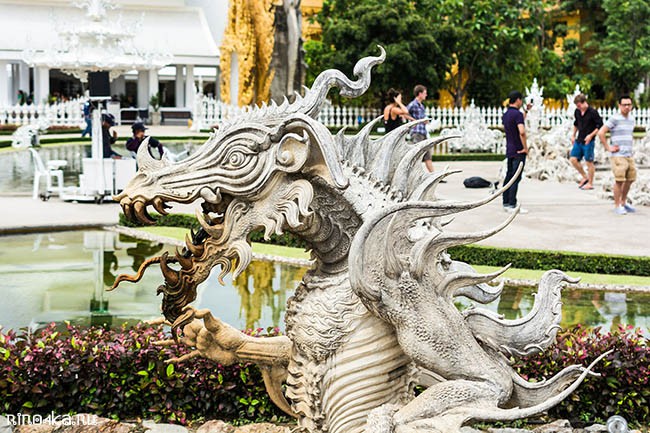 On the territory of the temple complex it is impossible not to notice the golden building. Its color was not chosen by chance. In contrast to the snow-white purity, gold symbolizes the concentration of worldly desires and money. Chalemchai Kositpipat calls it the body while ubotsot is the mind. It is no coincidence that there is a toilet in such a luxurious golden building. One can see at once the connection between the worship of worldly desires and their real value. 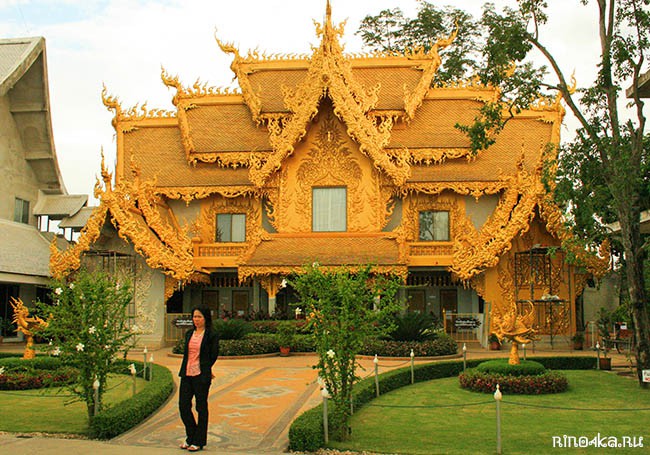 There are still many different statues within the temple complex. There are half-woman half-birds Kinnari, dragons, a character from the movie Predator, and many others.

Admission to the White Temple is free, and tips for temple construction are welcome. You can buy metal petals, write your wish on them and hang them on a special tree. Visit the gallery with works by Chalemchai Kositpipat, where you can see sculptures and early paintings by the artist. 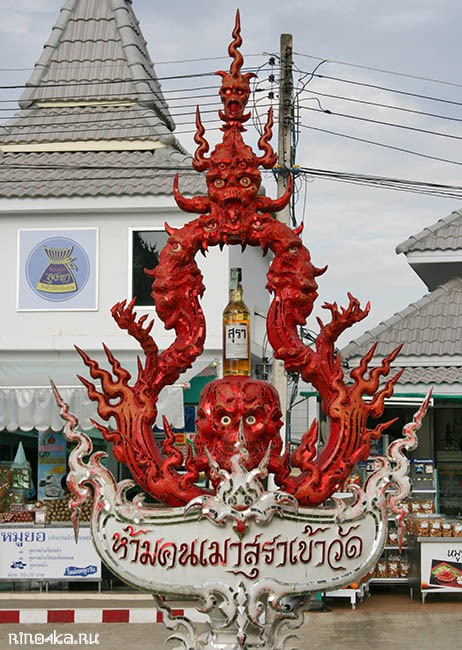 At Wat Rong Khun, it is better to arrive early in the morning or near sunset so that there are not so many tourists. The White Temple can be visited with a trip to the Golden Triangle from Chiang Mai City. 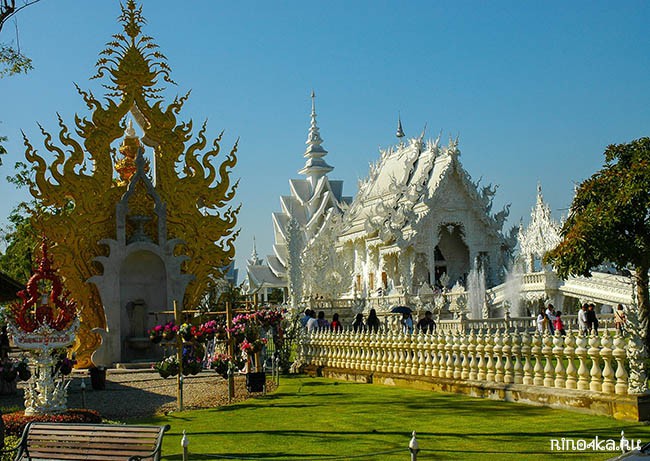 Location: 15 kilometers from Chiang Rai on Phahonyothin Road. Coordinates: 19.824264, 99.763080 How to get there: Take a cab or a sontaeo from the bus station near the night market in central Chiang Rai. Opening hours: 8am to 6pm.