Vøringsfossen Waterfall is one of the most visited natural attractions in Norway. Its total height is 182 meters with a free-fall height of 145 meters. This creates a simply stunning impression: a huge stream and a picturesque rocky canyon covered with forests. A rainbow often appears in the spray in these places, because of this the waterfall is called “rainbow”. It is worth seeing!

You can view the waterfall from either the upper viewpoint or the lower viewpoint. The upper lookout point is on the mountain plateau Hardangervidda. The waterfall itself is formed by the Bjoreio river, which pours its waters into the Måbødalen valley. To visit the lower observation deck and see the water streams up close, you have to work hard, go down into the valley and traverse a hiking trail along the river.

Territorially the waterfall belongs to the town of Eidfjord in the county of Hordaland. The name Vøringsfossen (Norwegian: Vøringsfossen) comes from the words “vyrða” (“to respect”) and “fossen” (“waterfall”). It’s not hard to guess that the locals revered the power of nature and the power of the water flow.

If you arrive by car at the upper lookout point, look for the sign “Fossli”, the hotel at the waterfall itself. At the top you have a grand panoramic view of the Hardangervidda plateau, the river, the valley, the second small waterfall Tysvikofossen. And, of course, from here you have a full view of Vöringsfossen.

There is a good infrastructure here, there is parking, toilets, souvenir shops, a restaurant and even an old hotel. Benches, bridges and handrails have been installed along the cliff. Improvements to the area are currently underway, and a special state program has even been developed for this purpose. Regional authorities claim that by 2023 the place will become even more comfortable and safer for tourist groups.

Hardangervidda Plateau is a part of the largest national park in Norway. The law protects both the area and its inhabitants. For example, the largest herd of wild reindeer that live in the wild is registered here. The national park attracts thousands of tourists both in winter and summer. People come for rafting on mountain rivers and hiking, as well as skiing in the snow season.

During the warmer months, from about May to October, Vøringsfossen Falls can be approached via a 1.5 to 1.8 kilometer long lower trail. It is called “Vøringfossen bottom hike”. The places are very beautiful and wild, you can walk longer, take original landscape pictures, take your time to explore the shore.

To get to the trail you need to find the beginning of the trail between the second and third tunnels of the R7 road (count the tunnels moving towards Eidfjord). Here you will notice an extension of the road where you can leave your car.

Follow the dirt road to the river (about 350 meters) and you will see a sign “Vøringfossen”. Then continue down to the bottom of the canyon. Be careful: the closer you get to the water, the more large and slippery rocks you will encounter. Continue along the path along the Bjoreio River towards the waterfall, crossing a wooden suspension bridge when you reach it. It won’t be long before you are there.

Remember! This walk is not suitable for people in poor physical condition and children. There are no handrails and paths. The route goes through a canyon. You must wear sturdy hiking boots to avoid hurting your feet.

Walking along the riverbed on video

History of the Falls and the Fossley Hotel

Until the late twentieth century, the Falls were little known to foreigners. That all changed when Ola Garen conceived the idea of building a small hotel here and arranging facilities for visitors from England. To allow the first guests to climb to the top of the waterfall, he built a staircase of 1,500 steps and refurbished the old road for horses and wagons. And in 1891 the Fossli Hotel opened its doors. A little later there was a road with tunnels, which by car or bicycle can reach the waterfall from the valley Mobodalen.

The hotel welcomes guests to this day. Famous travelers, writers, composers and even monarchs of various countries stopped here during their travels in Norway. The hotel keeps antiques related to famous guests.

How to get to the waterfall

The nearest village to Vöringsfossen is called Eidfjord. From there to the waterfall you need to travel another 18 km. There are several options:

The Winnufossen Falls, located in Norway, are visited by tourists from different countries every year. The misty tail of the stream is considered the longest in the world, reaching a length of 179 m. Dense vegetation breaks the cascade into parts, which join into a continuous stream closer to the bottom cliff. The natural landmark is 860 m high and reaches 150 m wide.

Winnufossen Falls is located east of the village of Sunndalsör in the mountainous part of the municipality of Sunndal in the Møre og Romsdal, on the Winnu River. It begins on Mount Winnufjölet. Takes water from a melting glacier, rushes down the valley in a continuous stream, flowing into the Driva River near the village of Holsand. 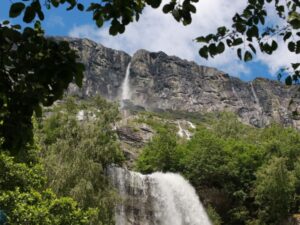 To see Winnufossen Falls, you must come to the capital of Norway – Oslo. After go to the city of Bergen – direct flights by bus, plane and train.

The fastest way is by air. Flights within the country are carried out by different Norwegian airlines. By train the journey is 8 hours, with views of the snow-capped mountains, fjords and valleys. Bus travel takes 10-11 hours. Departure from the main stop near the railway station Stromgaten.

The way by private car will bring more vivid emotions. If you take the E-70 road to Sunndalsøra, you can enjoy the beauty and massiveness of the Vinnufonsen waterfall from afar. It is better to choose clear and cloudless weather for the trip.

You can visit the cascade as part of a tour group with an experienced guide. Tour buses will quickly get you to your destination.

Sightseeing is free. The path is marked by signs. Dangerous and wet road consists of mountain ledges without railings.

Winnufossen Falls are considered the largest cascading waterfall in Europe, ranked 6th in the world.

There are restaurants 10 km away from the waterfall where visitors can eat and relax before their journey. For car travelers in Norway are equipped with campsites – summer campsites with places for tents. They are equipped with a grill and an electric stove, you can take a shower in a comfortable cabin.

What to visit nearby

The waterfall is not the only attraction in the vicinity. Tourists can visit the Troll Staircase (fairy-tale characters of folktales in Norway). It is considered part of road 63, passes through the mountain range Trollveggen. From the back slope the road is characterized by a steep descent, for which it was named “Troll’s Wall”. Along the way there are huts in honor of mythical heroes. 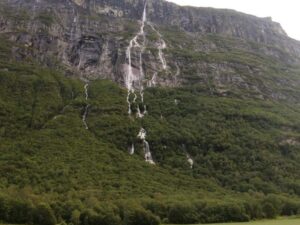 It is necessary to visit the Dovrefjell National Park. The territory is characterized by wildlife, protected by the state. Among the sprawling mountains there are reindeer, wolverines and musk oxen. The reserve is famous for the Amotan Cascade (150 m), the highest point of the area is Snohetta.

Rondane Park is popular with visitors. Depending on the time of year, tourists can enjoy activities on the territory: in spring and summer – walks in the territory, fishing (with permission), and in winter – dog sledding and skiing. Guest lodges are organized for convenience, and your own tents are allowed.

Winnufossen Waterfall is a natural attraction in Norway. If you plan the route wisely, you can see the cascade, take memorable photos and see the surrounding scenery during the trip.