A day in the life of a policewoman in the favelas

Rio’s slums are one of the most interesting places in the city, and patrolling and policing also falls on women’s shoulders.

Dramatized in movies such as City of God and Elite Squad, Rio’s sprawling slums or poor favelas are known only here, both fascinating and frightening for their sheer size, population density, and outbreaks of rage and violence. According to the 2010 census, nearly a quarter of Rio’s population lives in unregulated and informal communities that have sprung up spontaneously in the urban landscape, often right next to tourist areas and shopping plazas.

Slums have become synonymous with banditry, with drug trafficking as the main source of funds, and the appalling wealth gap makes Brazil one of the most unequal countries. Originally, the poorest residents of the favelas were called “descendants of the Negroes” because of the black slaves who had once arrived on unclaimed land. The settlements began to grow like mushrooms, especially after the wave of urbanization of the 1920s, when villagers left for the cities to find work.

Poverty, social exclusion, and high levels of drug use made some of the urban slums off-limits to all but the toughest, and except for heavily armed police units. The country’s national army is trained to keep the slums calm during, for example, municipal elections. Nevertheless, until 2008, the government made every effort to give the slums some semblance of normality, but all these attempts collapsed in the face of well-organized and armed gangs. Police officers became commonplace, catching the gunmen who were still alive but scared to death. Illegal killings of police officers by vagrants, looting, drug gangs, a confusing system of relationships between drug lords, and their frequent gatherings resulted in the slum being isolated from the city’s residents to the maximum extent possible.

Since 2008, however, Secretary of Public Safety Jose Mariano Beltramé, inspired after a visit from Colombia’s president, began collecting information on various innovative methods of public safety.

With a budget of $1.7 billion, city officials organized a new police unit called the Unidade de Policia Pacificadora (or Restoration Police), whose officers are specially trained and receive a monthly pay bonus.

Before the new unit goes into the favelas, a special Batalhao de Operacoes Policiais Especiais (special police battalion) is sent there to identify drug dealers and find arms caches, arrest most criminals, and generally establish maximum control over the area. Only then are the Restoration of Tranquility Police sent to the slums to be permanently present, to gain the trust of ordinary residents and to patrol on a regular basis.

According to Beltramé, the goal of the new approach is to completely stop drug trafficking on the streets of these neighborhoods. Among the usual armed male police officers in the Restoration of Tranquility Police are a small number of female officers. Major Priscilla de Oliveira, 35, and her team of 700 are trying to bring relative calm to the vast favelas of Rio de Janeiro, with a population of 100,000.

Priscilla and her 15 fellow female police officers have received the same training as the men. When asked how she feels about working with hundreds of male colleagues in a stressful and often life-threatening environment, she replies: “It’s wonderful. I’ve worked with a lot of men for the last 15 years. I really enjoy it.” Leanne Milton went on patrols with various units of the Restoration Police and filmed the role that female police officers play in Brazil.

Officers from the Calm Restoration Police prepare to take their weapons on patrol of Complexo do Caju, a new “pacified” favela in the northern part of the city. Ahead of the 2014 FIFA World Cup and the 2016 Olympics, all police forces are deployed to provide security in the notorious favelas. The Complexo do Caju deployed police units on a permanent basis back in 2013. Elite police units, supported by armored military vehicles and helicopters, control the area and try to deter armed drug traffickers.

This is Rio de Janeiro!

A large-scale project by a professional photographer under the pseudonym JR, focused the public’s attention on the women living in the poor neighborhoods of Rio de Janeiro. Rio is a place blessed with natural beauty and climate, but torn by conflict between rich and poor. Many residents of this six-million-dollar city live in slums called favelas. Want to know a little more about Rio, check out this selection! 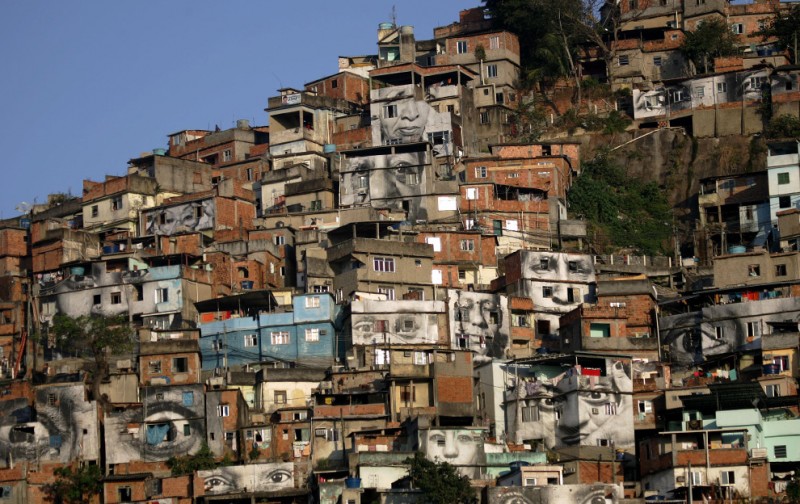 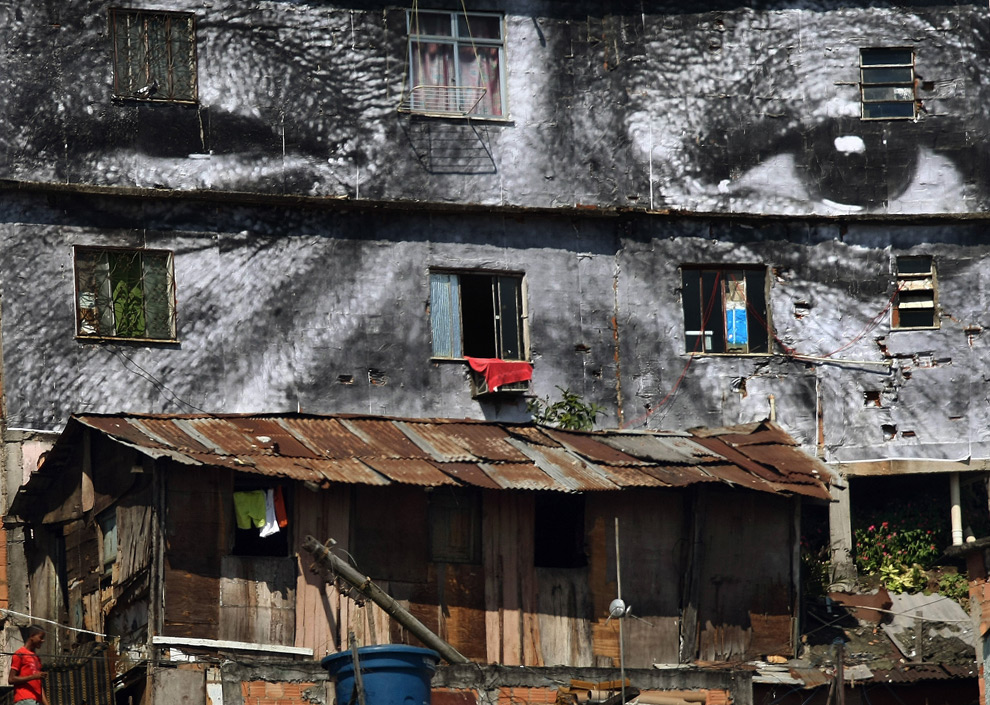 A view of the facades of the houses of the favela Morro da Providencia (Slope of Providence), one of the most violent slums in Rio de Janeiro. August 20, 2008. A French photographer, under the pseudonym of JR, launched a project called “Women Heroes,” in which photos of women whose relatives and friends were killed in clashes between police and drug dealers were placed on the facades of homes. Similar projects have already been implemented in Sudan, Sierra Leone, Kenya and Liberia and are planned in India, Cambodia, Laos and Morocco. (VANDERLEI ALMEIDA/AFP/Getty Images) 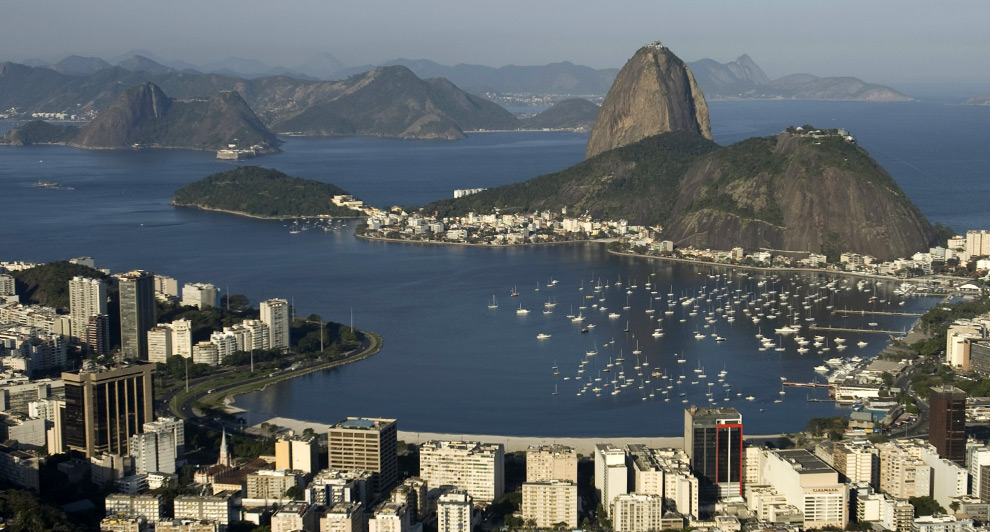 An aerial view of the famous Sugar Loaf Mountain in Rio de Janeiro, August 18, 2008. A cable car leads to the observation deck on the mountain, one of the most visited places in Rio and visited by 800,000 tourists a year. (REUTERS/Bruno Domingos)

Giant pictures of women on the walls of houses in the Providencia slum. Rio de Janeiro, August 15, 2008. French photographer JR, as part of his project called “Women Heroes,” posted photos of women whose families and loved ones were killed in clashes between police and drug dealers. (AP Photo/Ricardo Moraes) 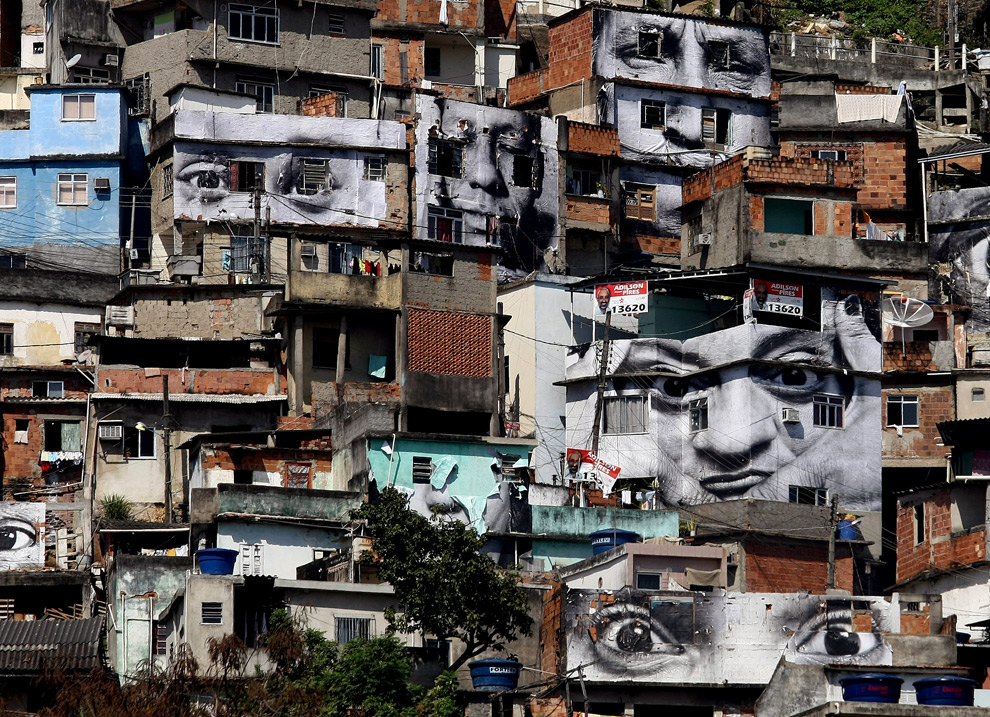 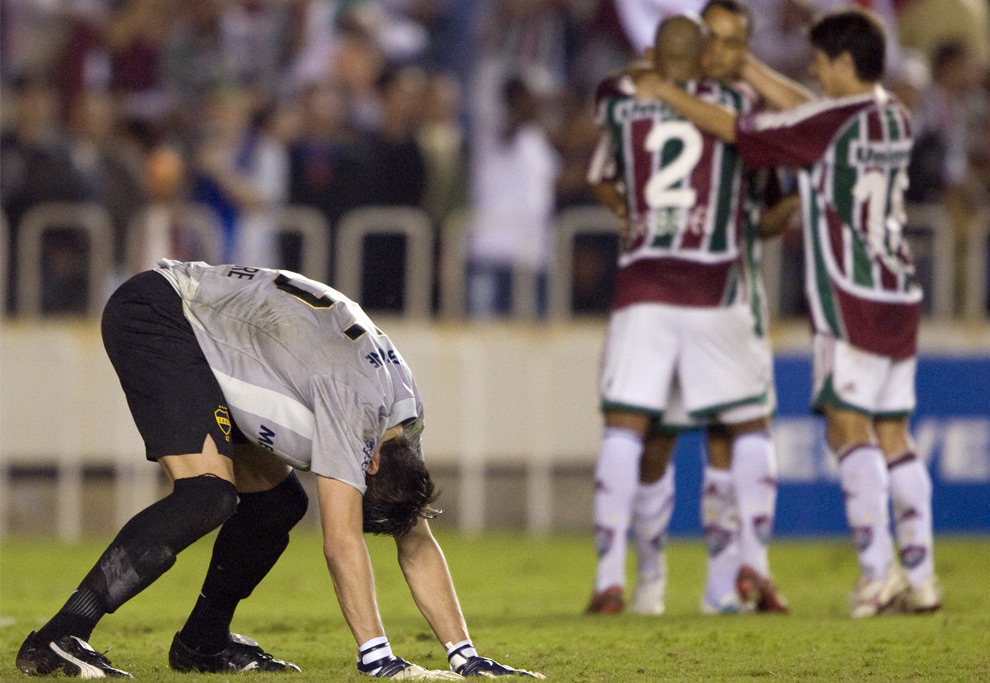 Boca Juniors goalkeeper Alejandro Migliore, left, against the backdrop of Fluminense FC players as they celebrate their third goal of the Libertadores Cup second semifinal match against Fluminense on June 04, 2008 at Maracana Stadium. (ANTONIO SCORZA/AFP/Getty Images) 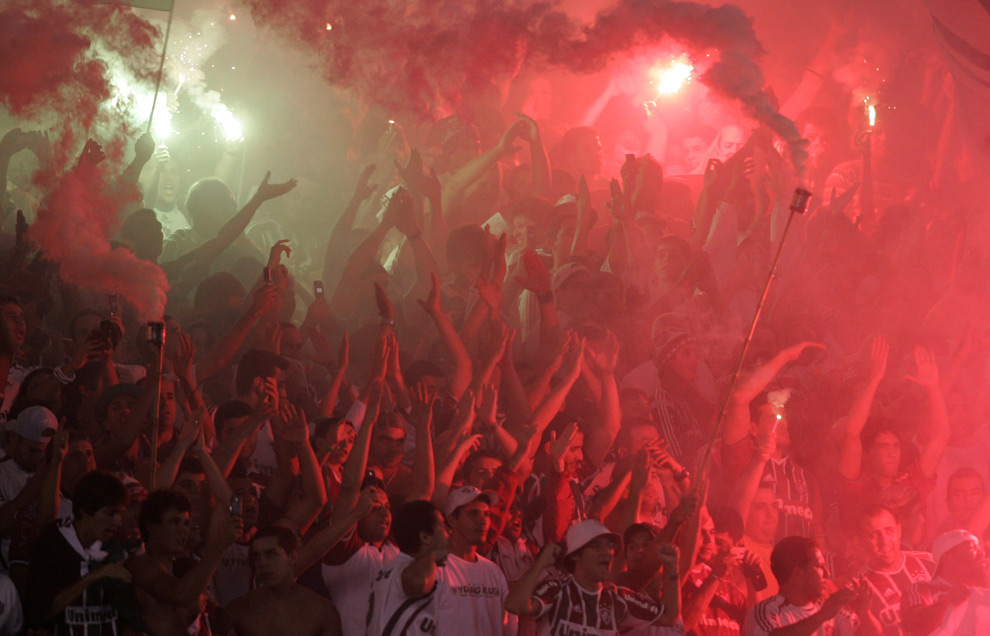 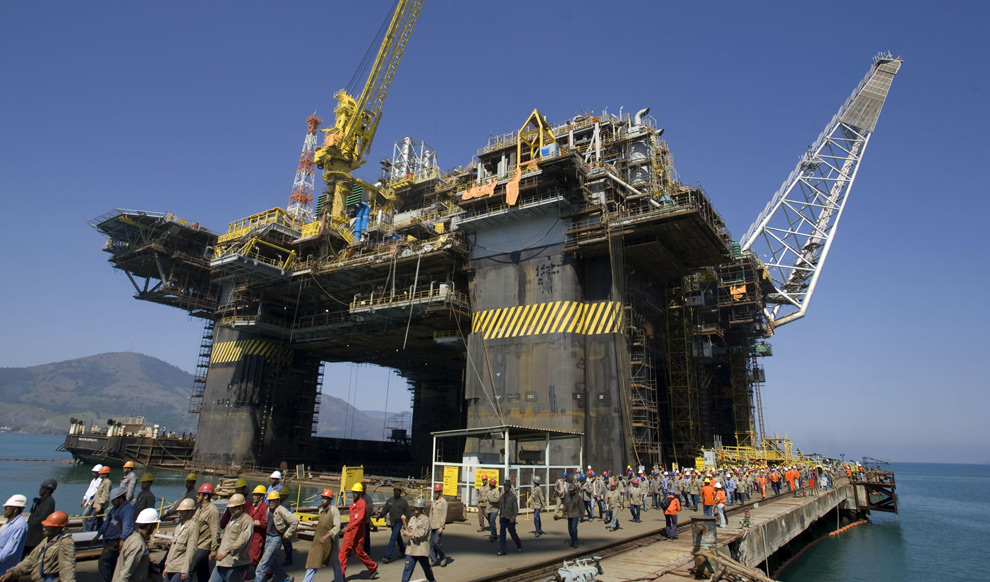 The P-51 oil rig of Brazilian oil giant Petrobras in Angra dos reis. Rio de Janeiro, August 21, 2008. This platform, the first semi-submersible (floating industrial unit) to be built in Brazil with a total investment of $850 million, will have the capacity to refine 180 oil wells. It will be able to process 180,000 barrels of oil and 6 million cubic meters of gas. (REUTERS/Bruno Domingos) 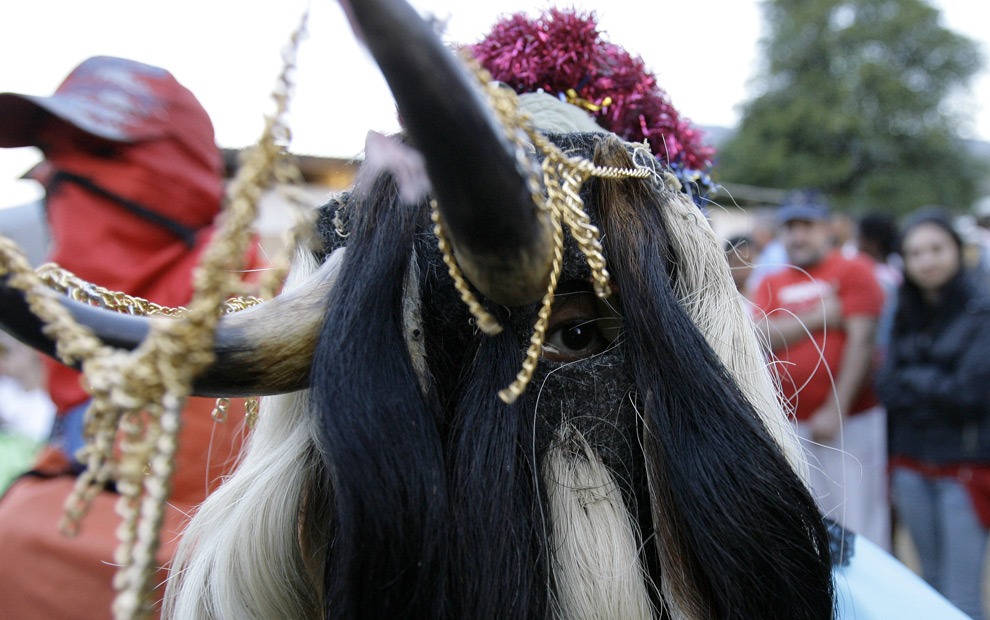 A man with a bullhorn during the Jongo festival at the ex-slave community in Valencia near Rio de Janeiro, May 17, 2008. The rituals of the Jongo festival are a legacy of the African slaves who worked in the 19th century on the coffee plantations. Slaves in Brazil gained their freedom in 1888. (AP Photo/Ricardo Moraes) 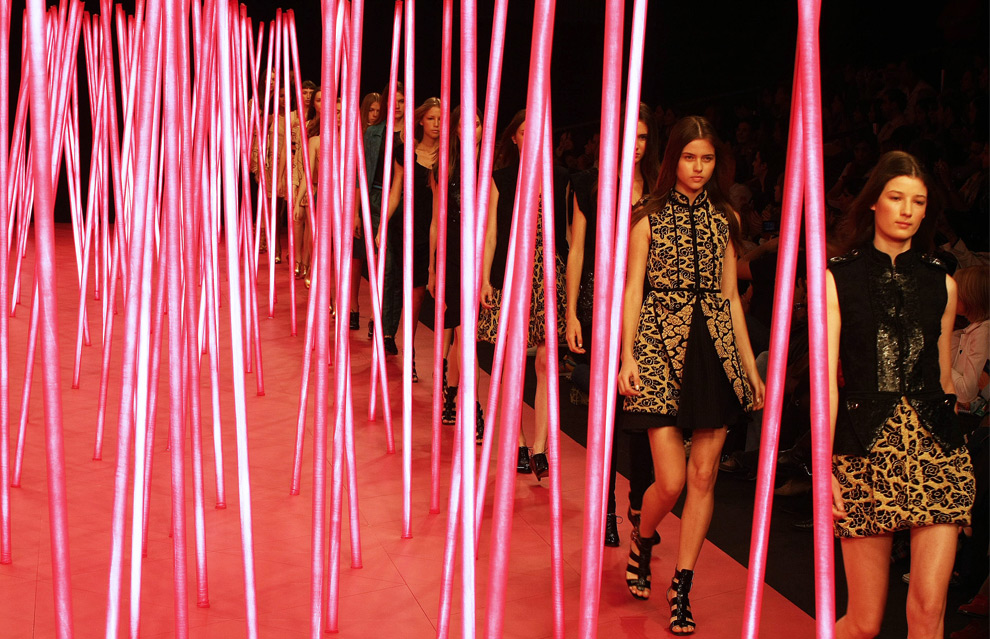 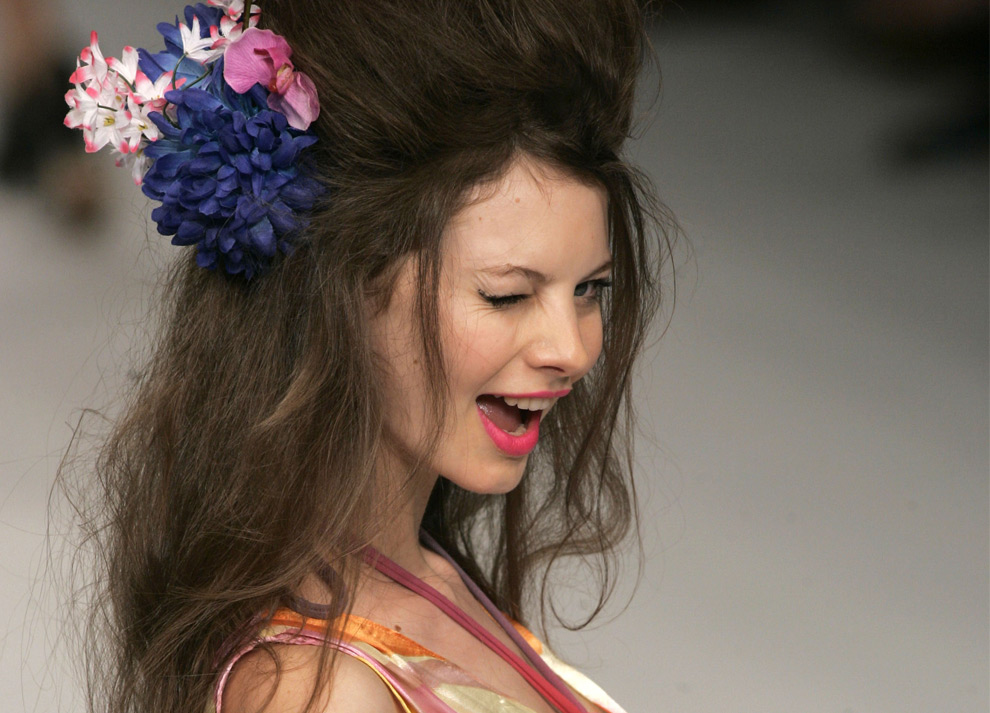 A model wearing an outfit by Nana Carana during the Brazilian Spring-Summer 2008-09 Fashion Week. Rio de Janeiro, June 13, 2008. Her beau has already ordered flowers to be delivered to her house, it looks like her evening will be a success. (AP Photo/Silvia Izquierdo) 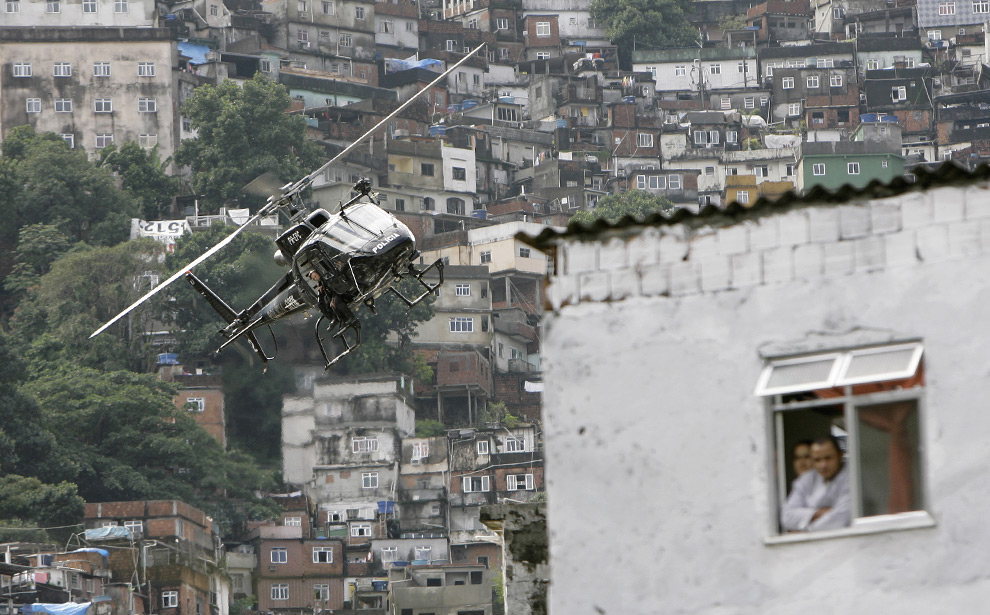 A police helicopter flies over the Rocinha slum during a police operation in Rio de Janeiro, June 2, 2008. According to UN envoy Philip Alston, Brazilian police officers commit thousands of murders that go largely unpunished as the police receive public support to suppress crime. According to the Brazilian Institute of Public Security Clashes with the police killed a record 1,260 civilians, in Rio de Janeiro state last year, according to. (AP Photo/Ricardo Moraes) 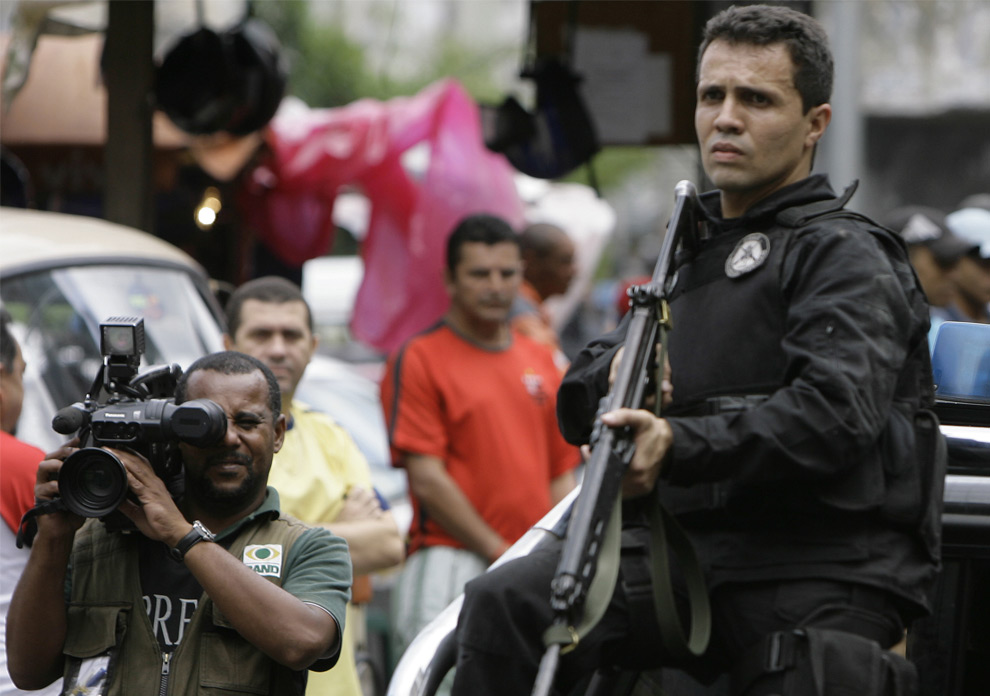 A cameraman films a police operation on the streets of the Rocinha slum in Rio de Janeiro, June 2, 2008. Two Brazilian journalists investigating in a Rio de Janeiro slum say they were kidnapped and tortured by armed men who identified themselves as police officers, O Dia newspaper reports. (AP Photo/Ricardo Moraes) 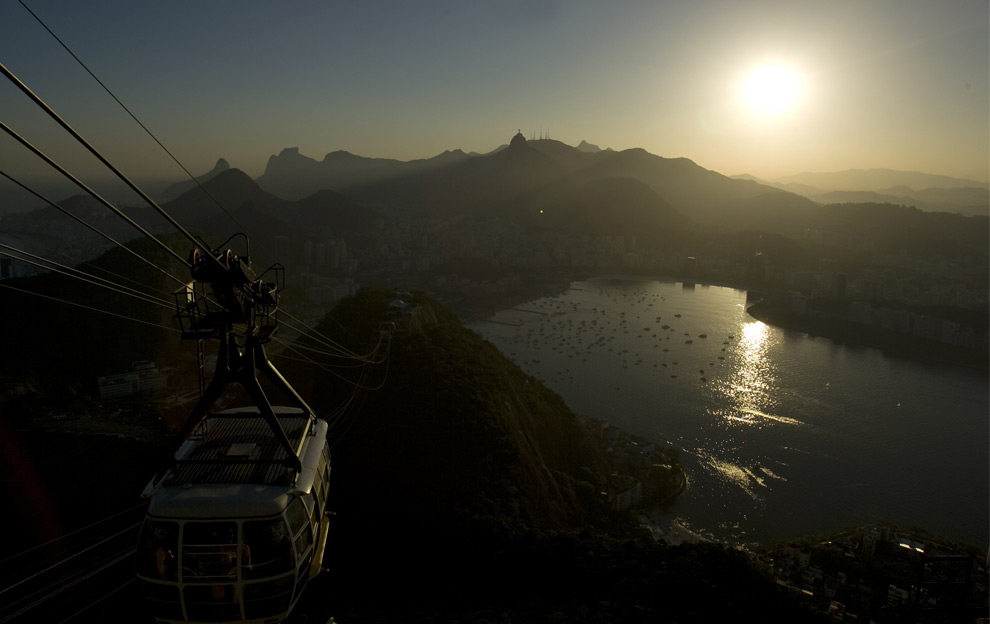 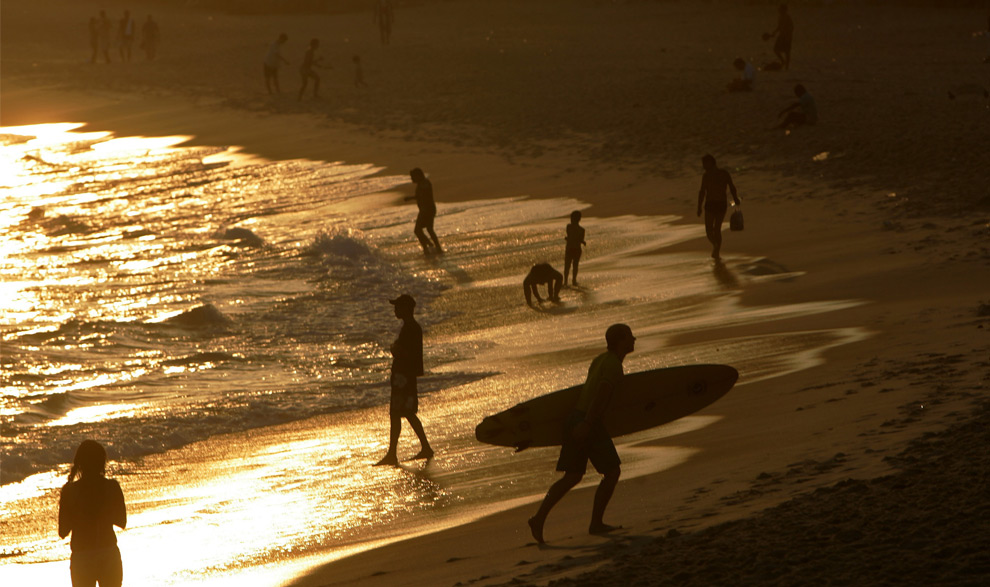 Swimmers at Arpoador beach in Rio de Janeiro, July 29, 2008. Rio has moved from 135th to 31st on the list of the world’s most expensive cities in recent years, and is now between Barcelona and Stockholm. (AP Photo/Ricardo Moraes)