All the colors and facets, all the richness and beauty of nature in one section. Fantastic beauty is literally right next to us. Butterfly valleys and cotton castles, cliffs and coral reefs, Altai and the sand dunes of the Sahara – all this nature, which we admire, try to capture for thousands of years and share this joy with all our loved ones.

Taimyr Peninsula located in the far north of Siberia is a real Terra Incognita (Latin for “unknown land”) for most Russians.

The Gulf of Ob is one of the world’s greatest marine bays and the largest, formed by the mouth of the Ob flowing into the Kara Sea.

Sor Tuzbayir is a natural combination of deserts, hills, and bluffs; one goes here to view the salt marsh and conquer rocky peaks.

Cape Gamov is the southern tip of the Gamov Peninsula, famous for its ancient lighthouse and many sunken and resting ships.

Spokoinaya Bay in the Sea of Japan near Nakhodka, its natural and climatic features create favorable conditions for recreation of families.

Okunevaya Bay – a resort in Primorsky Krai, on the shore of the Sea of Japan, you can stay at a comfortable recreation center and recharge your health for the whole year.

The climate of Khabarovsk Territory belongs to the continental type, characterized by sultry rainy summers and harsh winters with minimal precipitation and cloudy days.

Northern Lights originate high in the Earth’s atmosphere – at altitudes from 96 to 402 km. Charged solar particles enter the magnetic field of the planet.

The Strait of Gibraltar is one of the oldest shipping lanes linking Europe and Africa. Cruises on it are excursions to cities in Spain and Morocco.

Romantic natural phenomenon “white nights” is observed not only in St. Petersburg. It is characteristic of some other cities.

Kimberley Plateau, located in the northwestern part of the Australian continent in the region of the same name, is remarkable for its unusual relief.

The Lost Sea (locally called Bien Lak) is located near the province of Dongnai, it has no permanent structure, sometimes disappearing and appearing at intervals.

There are many interesting places in Vietnam, there are places that only aesthetes will like, these were the red dunes and red canyon.

Province of Krabi is a wonderful place not far from Bangkok, a pleasant climate, beautiful scenery, and ancient monuments of history attract tourists from around the world.

Krasnaya Polyana is a unique place which has no analogues in the world. It is the only natural complex with a record number of natural and man-made monuments.

Guilin is a wonderful place located in China, it is recognized as the national treasure of the country.

Sudd is a wonderful place in Africa, there are no natural ways, and all the paths are “paved” by the narrow boats of the locals.

Direct indexed hyperlink is required for full or partial use of site materials.

100 most beautiful places on the planet. Part 1 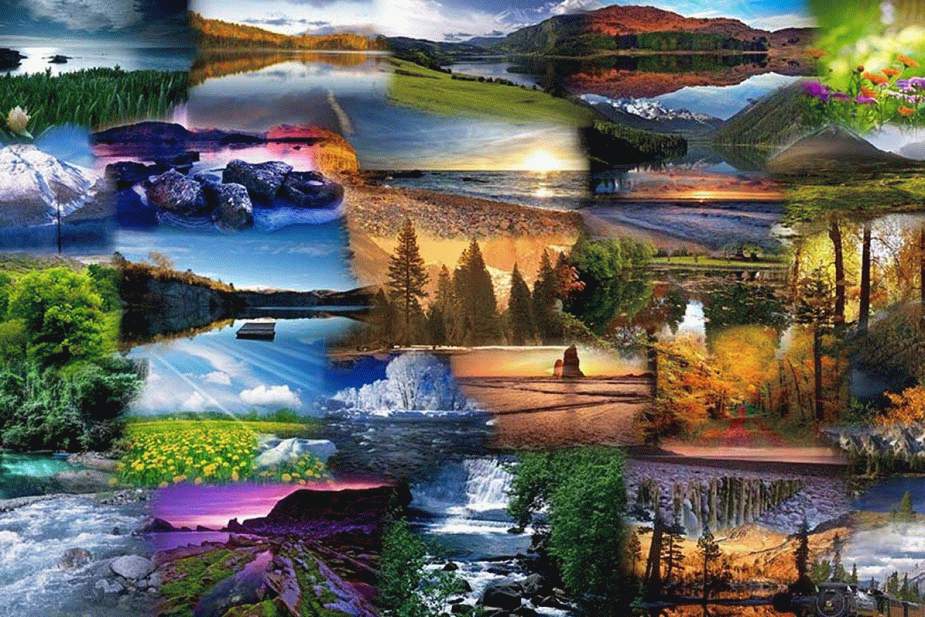 Most people on our planet live by a measured routine, preferring new experiences and development to the quiet backwater of the family and boring work. Well, to each his own. However, we sincerely believe that there are a lot of places on the planet so beautiful that everyone should see them, without exception. When you see these pictures, you might think that these places are on some other planets, in other galaxies, but not on Earth. Keep this list and, who knows, maybe it will help you reconsider your priorities. 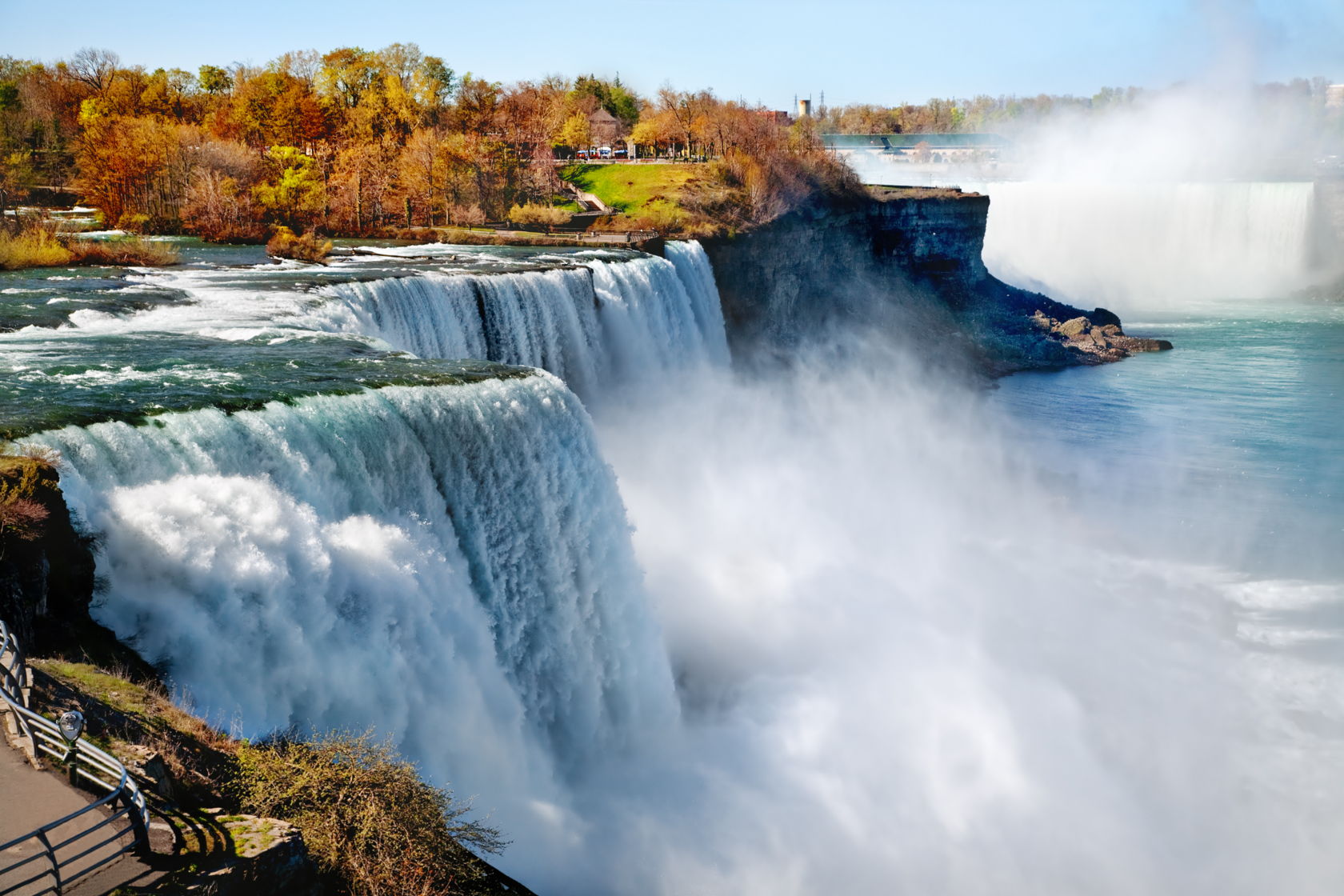 Niagara Falls consists of three big streams: Horseshoe Falls, American Falls and Bridleway Falls. It is very popular among tourists (largely because of the developed infrastructure). This is not the highest waterfall, about 53 meters, but one of the most powerful – the volume of falling water reaches 5,700 m³/sec. 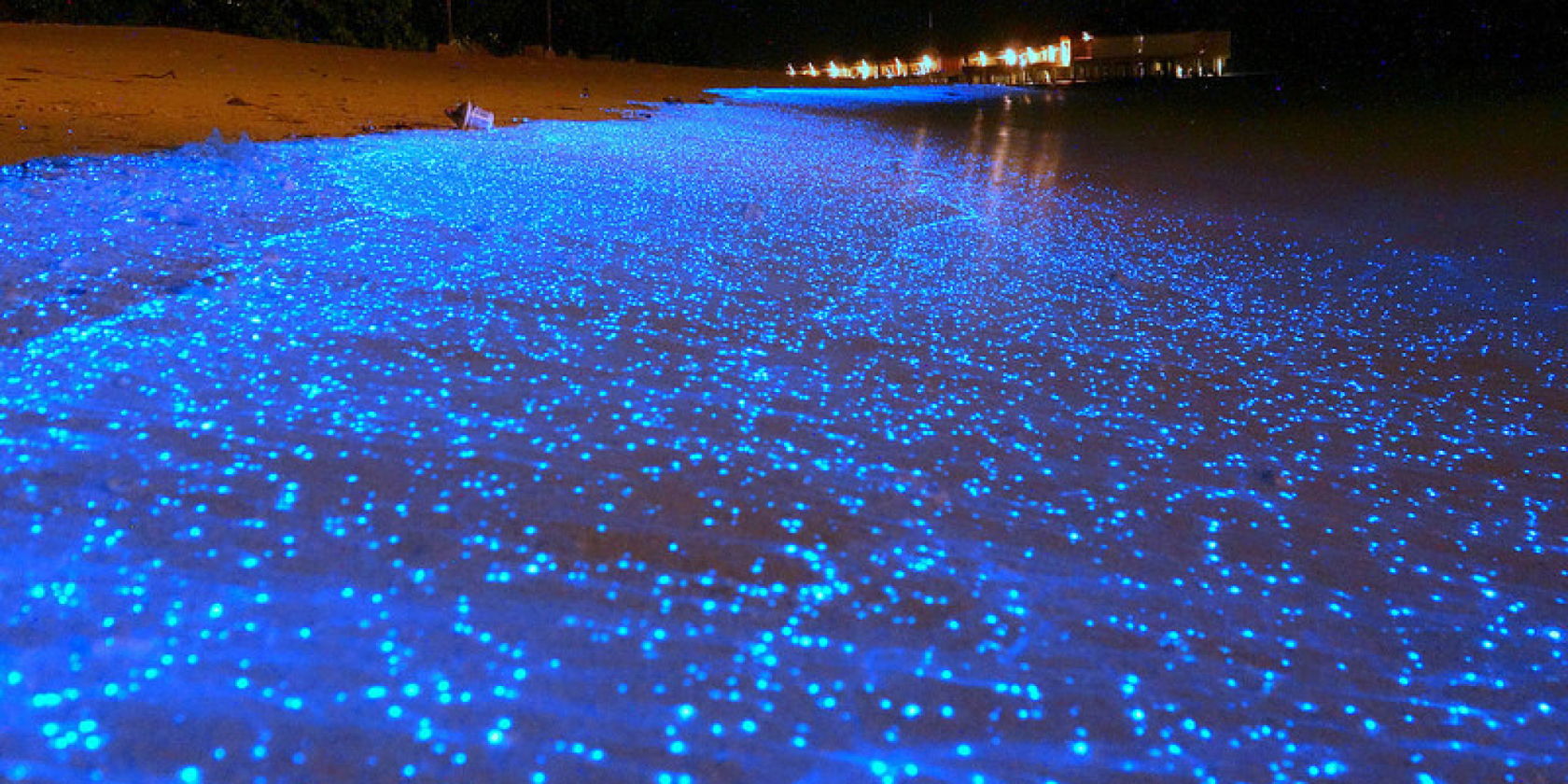 It would seem that what could be interesting in bioluminescent phytoplankton? However, it is worth a look. A unique type of plankton that glows in the dark, can be seen only on the island of Vaadhu. The waves come ashore, take it with them, and the water begins to shimmer with hundreds, thousands of sparkling lights. 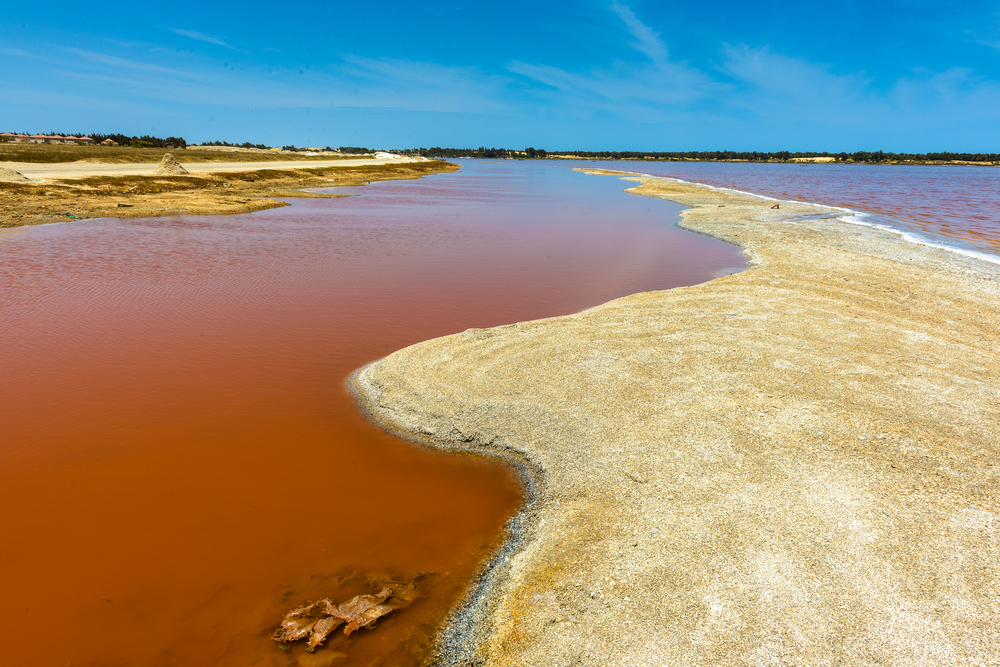 Lake Retba is located in the northeastern part of Dakar and is known for the unusual color of its water. The color of the lake is due to the algae that make the water rich in color from soft pink to scarlet. Also the water has a high salt content, so you can stay afloat all the time, as in the Dead Sea. 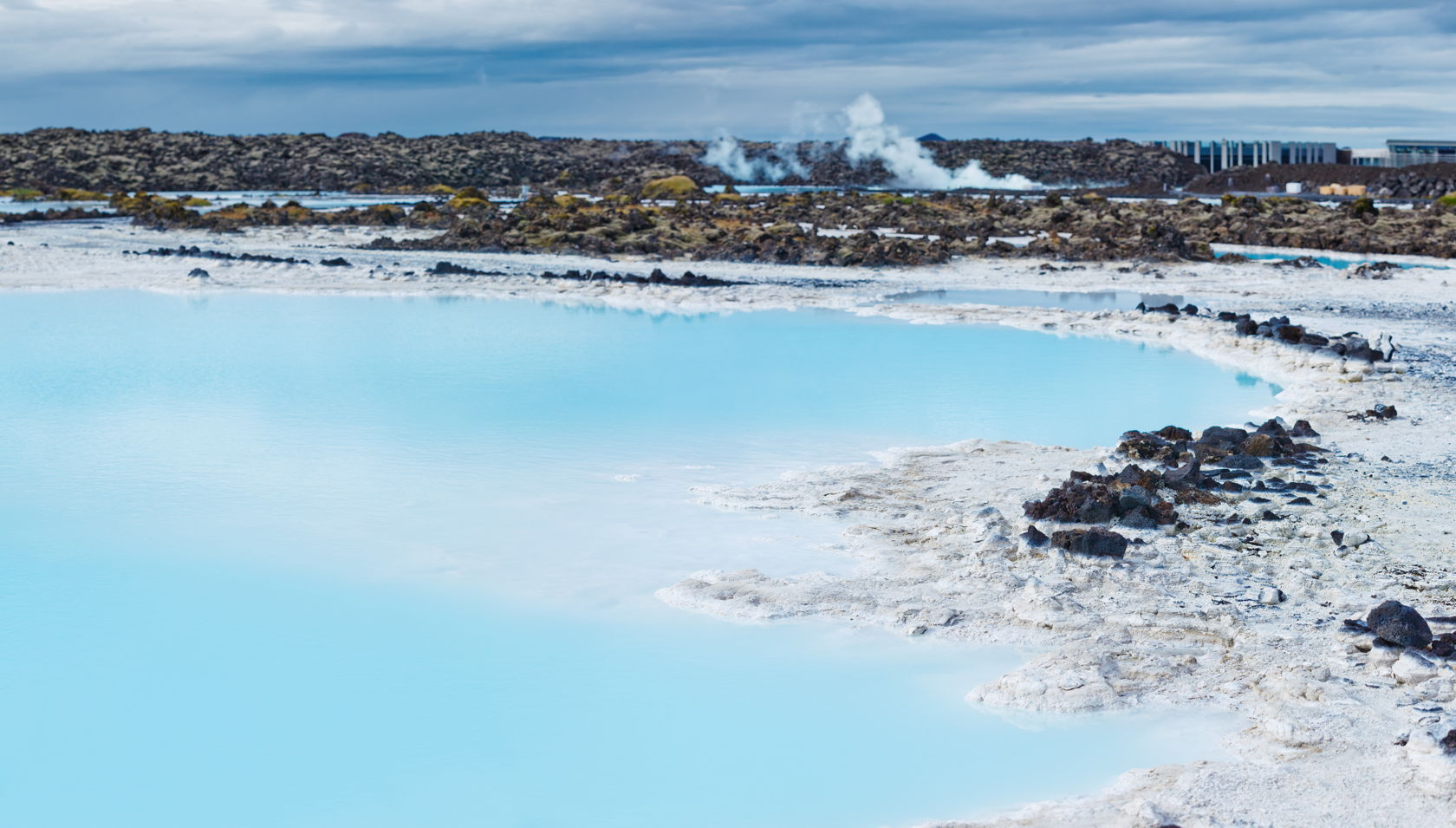 Blue Lagoon is a geothermal spa resort just 40 km from Reykjavik. This place did not appear on its own, but largely thanks to man: water from the power plants supplying energy to the capital accumulated on the lava plateau. As a result, mineral salts, silica and blue-green algae appeared in the water, which gave it medicinal properties. 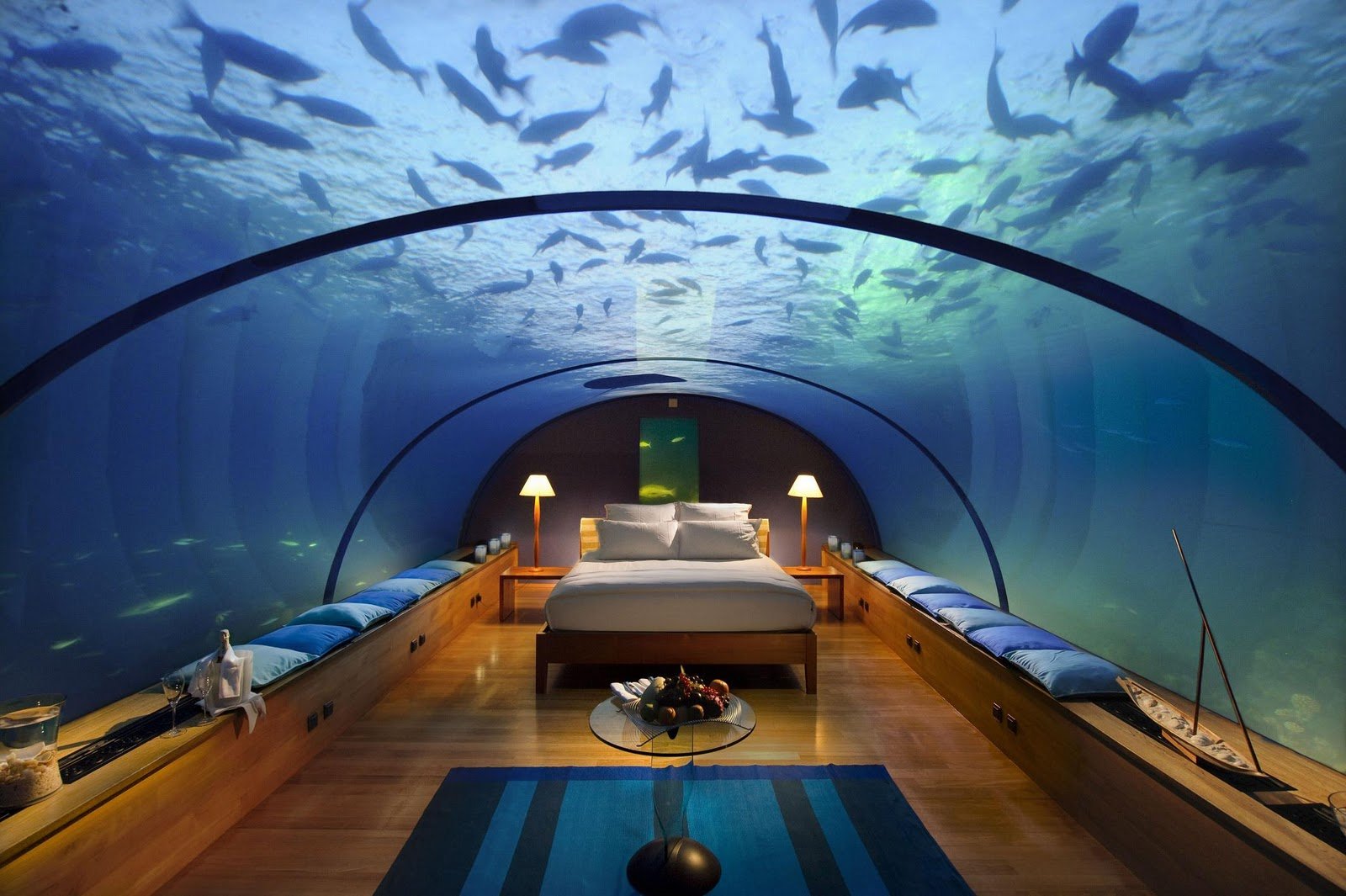 This hotel is located directly under the sea at a depth of about 13 meters in the middle of the lagoon. Each room is a separate sealed capsule with an open view of the underwater world. The hotel is expensive, but guests are served to the highest standard: there is a bar, restaurant, gym and even a church for those who want to play an unusual wedding. 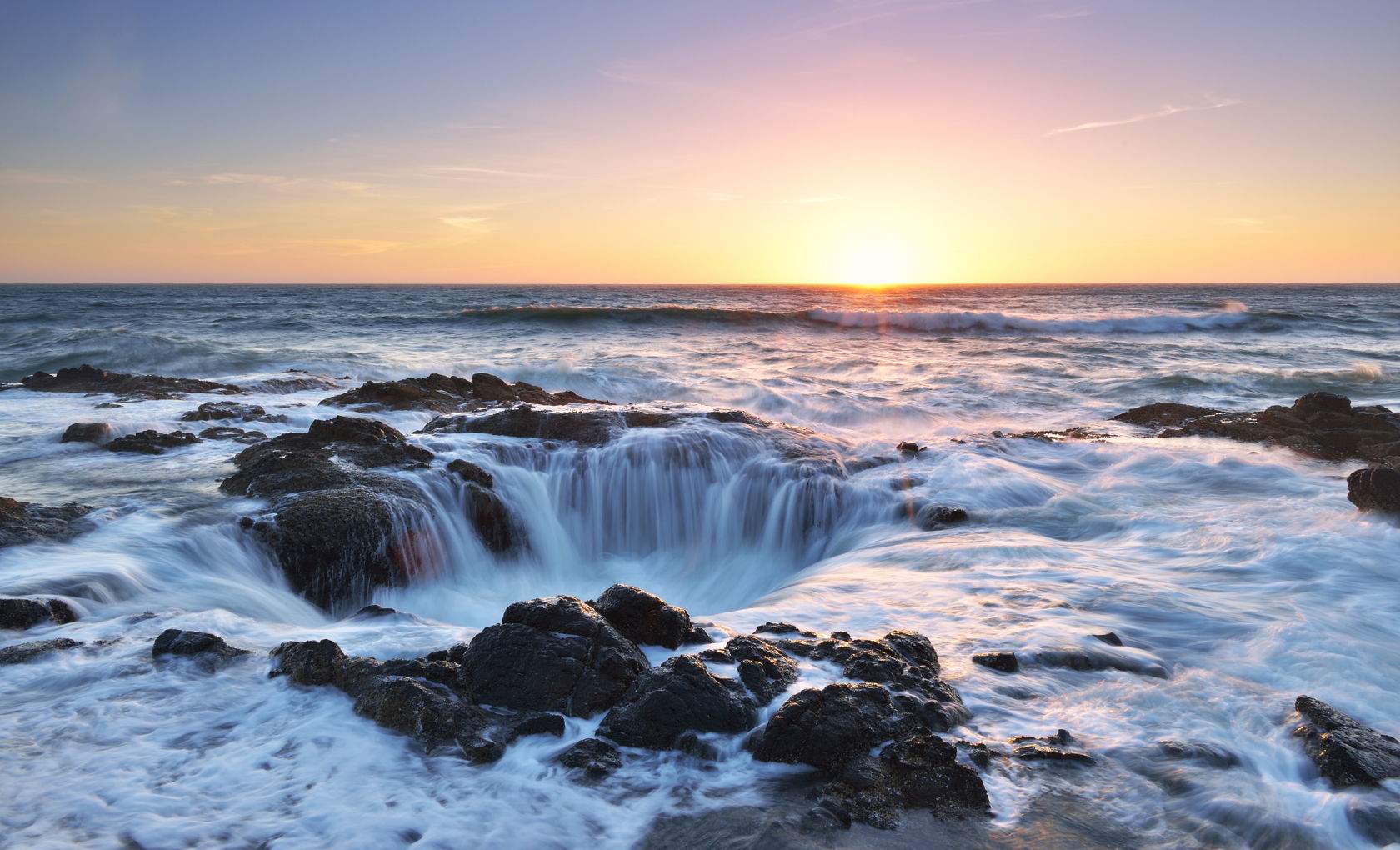 Thor’s Well, part of Cape Perpetua, is a stone funnel that goes several meters deep. It is still unknown what is at the bottom of the well, divers do not risk going down there – strong current prevents it. It is desirable to visit the funnel an hour before high tide: the water begins to fill quickly the Well of Thor, and then spectacularly throws up a 6-meter fountain of spray.

7. The Gate of Paradise, China 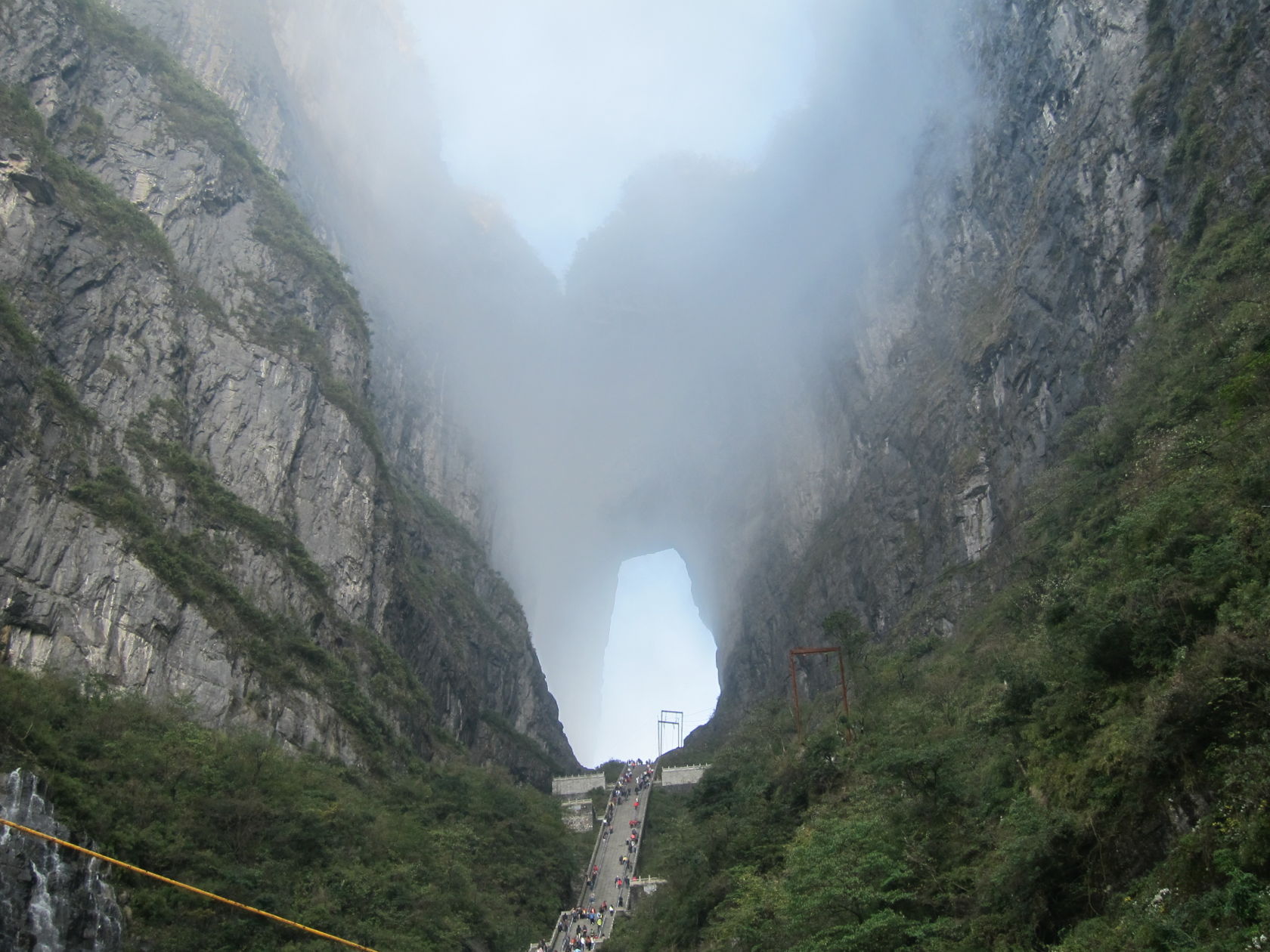 The Gate of Paradise, China

Another name is “Heaven’s Gate. This is the highest cave, it was formed in 263 when suddenly a large piece of the mountain just fell off, creating a huge cavity. At the foot of it leads 999 steps: according to legend, by going through them, you can achieve enlightenment and come close to God. Not everyone can do it, and in China, apparently, do not like to disappoint tourists, so they made the world’s longest cable car and the highest open elevator. You can almost always see a cloud of mist over the cave, which gives it even more mystery. 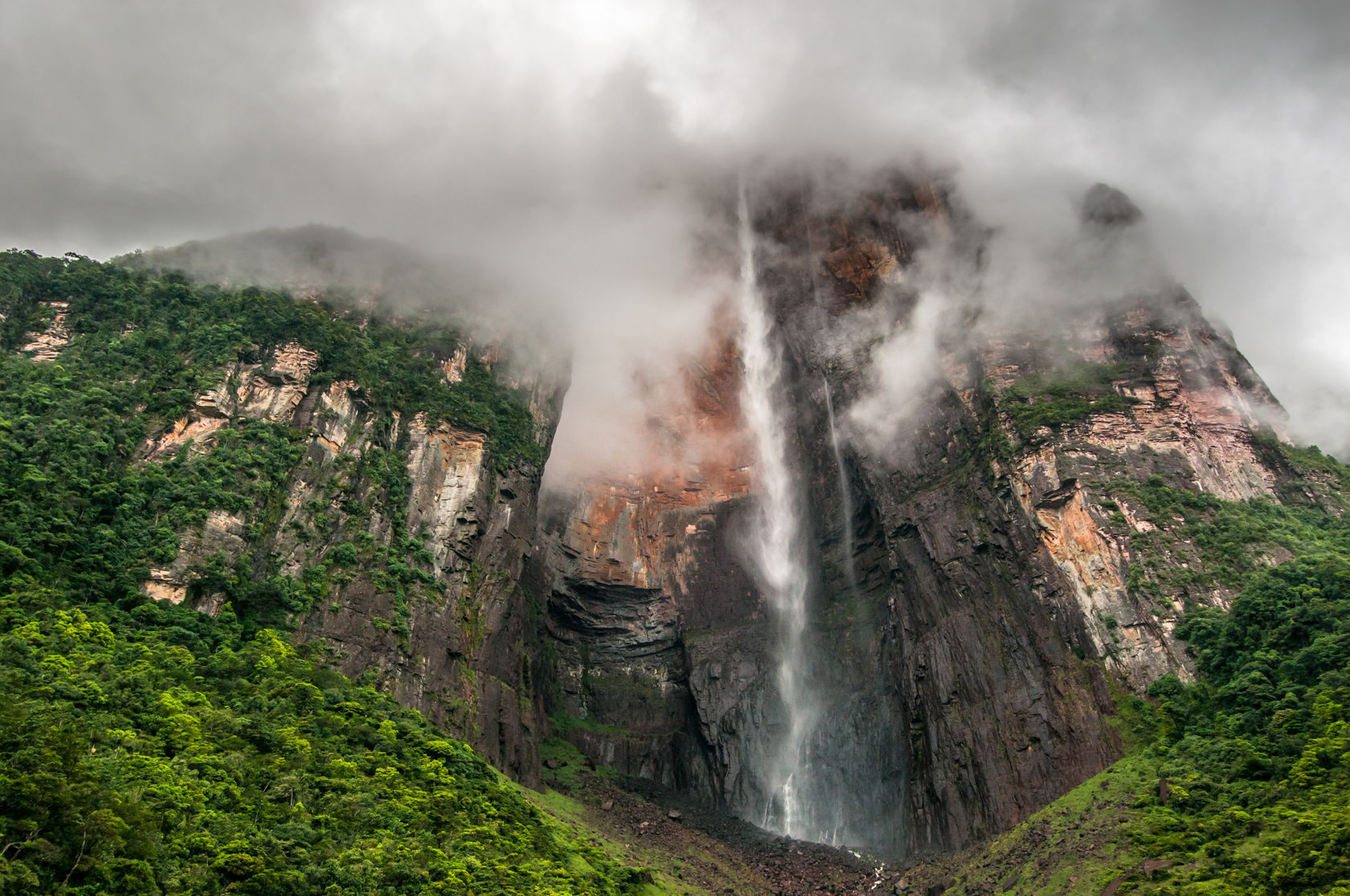 Over 1,000 meters high, Angel Falls consist of two cascades and three levels. It is the highest waterfall in the world, with a continuous drop of 807 meters. Before reaching the ground, the water sprays and turns into a mist that can be felt several kilometers away. By the way, the name of the waterfall has nothing to do with angels, it is named after the American pilot James Angel. 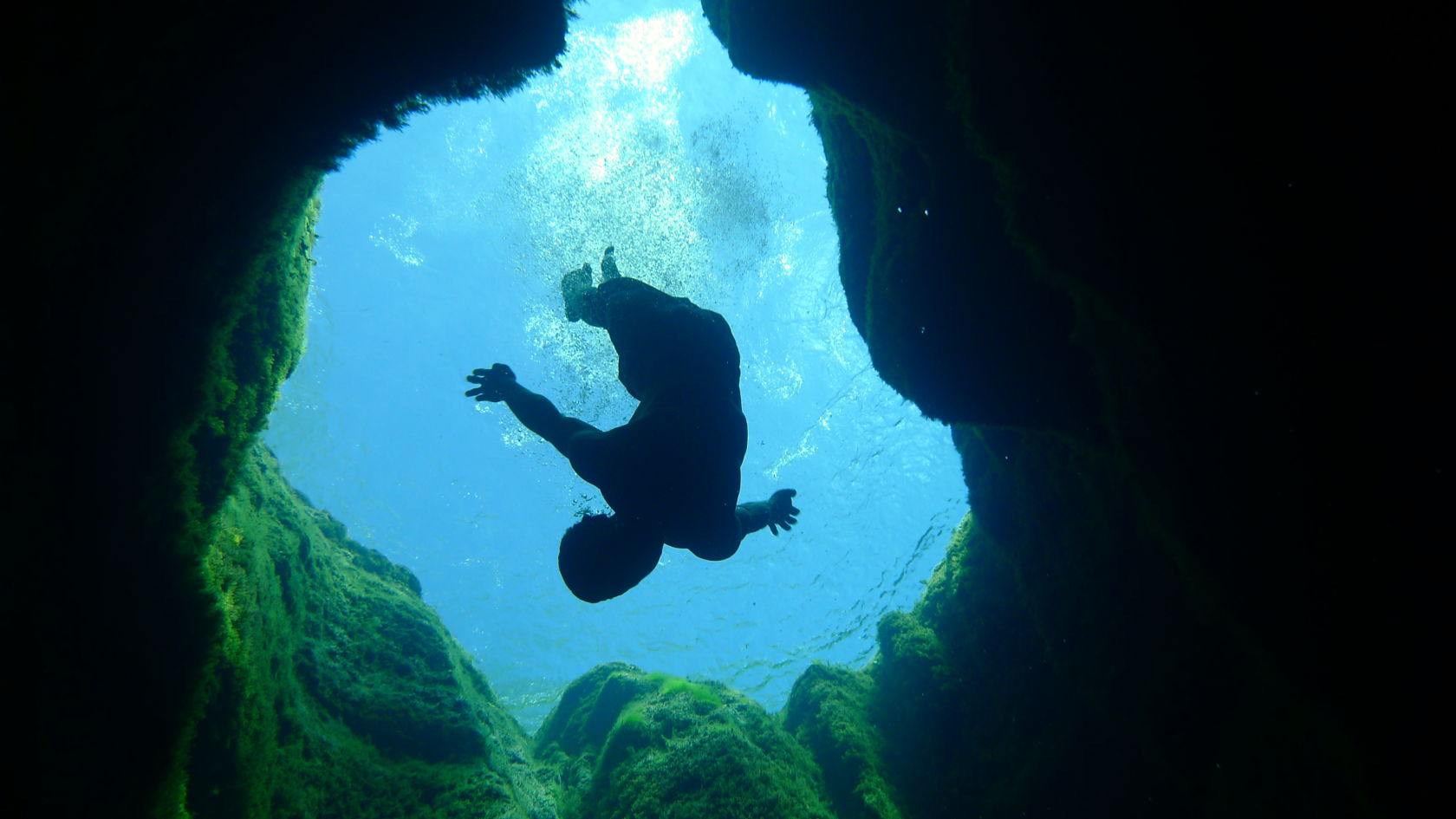 Jacob’s Well is a natural well with underwater caves that attract divers from all over the world. Even the fact that it’s not the safest place to dive doesn’t scare scuba divers off. As well as tourists, attracted by the pure artesian water and legends.

READ
Guinea-Bissau is a state in West Africa, the capital Bissau 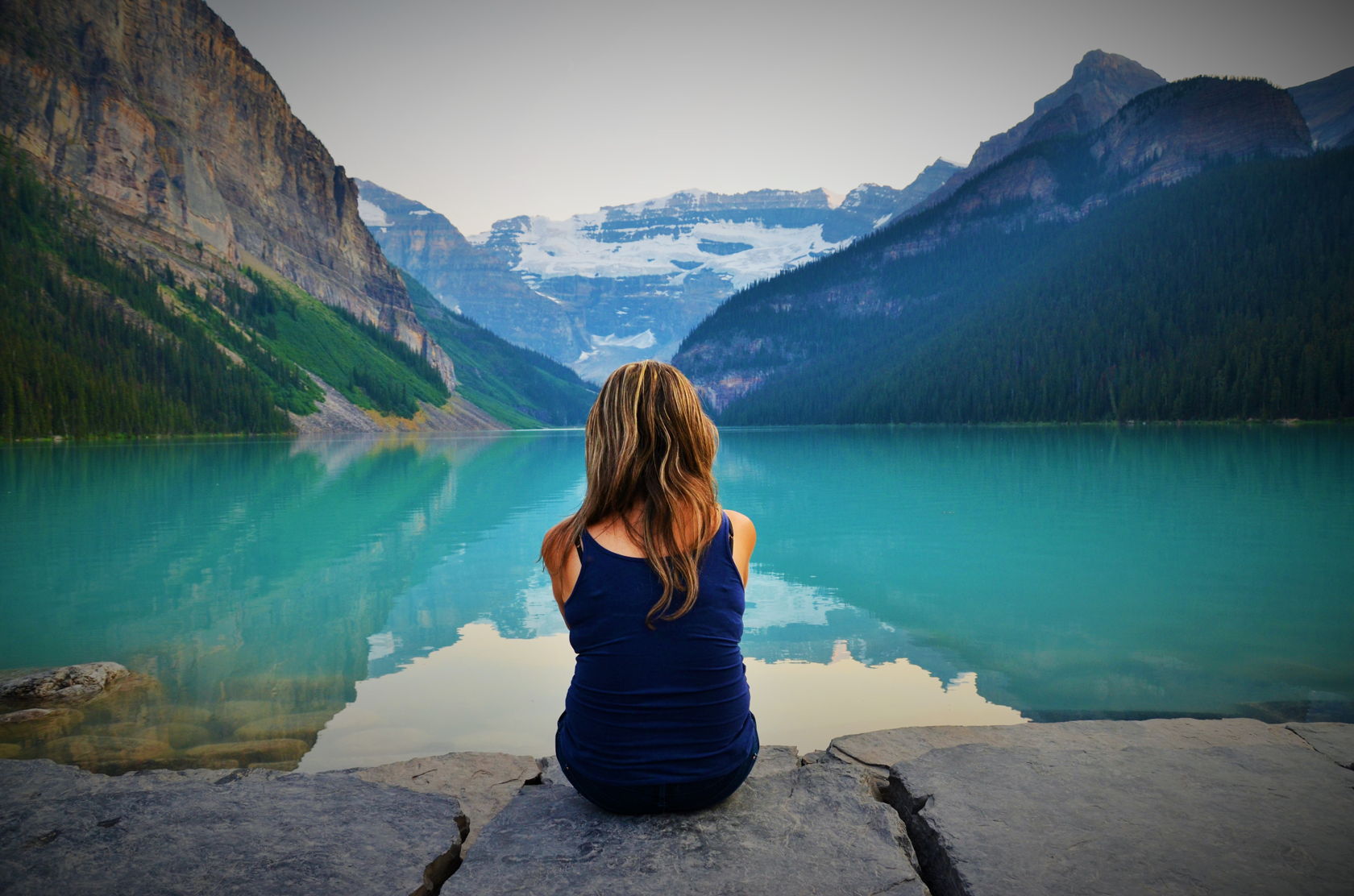 A glacial lake in Alberta province in Canada. It is surrounded by the Rocky Mountains, the tops of which are covered with snow all year round and the slopes with evergreen forests. It is a place for outdoor activities: hiking, horseback riding, biking, golf, tennis, skiing, mountain climbing and dog sledding.