Dessau-Wörlitz – a wonderful place in Germany

What is the Dessau-Wörlitzer Gartenreich? This is the name of an enormous nature reserve created in the 17th century in the flood plains around the rivers Mulde and Elbe, near the towns of Dessau and Wörlitz. The biosphere complex with a total area of about 142 square kilometers includes landscape parks, 7 palaces and various buildings between canals, lakes and rivers. They blend so seamlessly with the wildlife that these facets are barely noticeable.

All the natural and artificial components here in addition to decoration have an educational load. Walking around this area encounter temples or towers, then the altar of the goddess Venus, or a cave island. Among the many bridges is the bridge of Princess Friederike, on whose initiative the Red Cross was founded. The prince was friends with “one of the best mathematicians of the nineteenth century,” Sir William Rowan Hamilton, and Villa Hamilton was built in his honor. For the Jews in 1787-1790 even built a synagogue, during the night pogroms in 1938, it miraculously survived, but its interior was damaged pretty badly. 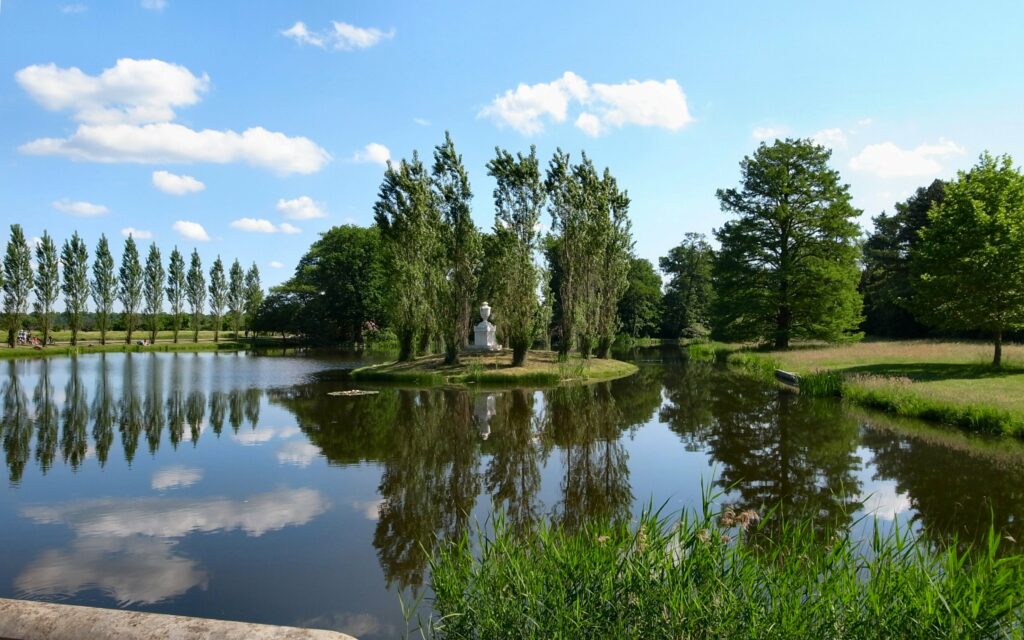 Traveling around Europe, Leopold III of Anhalt-Dessau had a lot to learn. And under the impression of what he had seen, he intended to ennoble his estates in the best traditions of the time and with the help of landscape artists was able to transform them with such skill, combining functionality and beauty that it seemed something extraordinary.

The princedom with its parks, to which all comers were admitted, began to actively attract intellectuals. Artists, poets and philosophers flocked to Wörlitz. At one time it was visited by the brightest minds and creative personalities, among them was J.-J. Rousseau (man-made “island Rousseau” is a copy of his tombstone). And in a 1778 letter to his close friend Charlotte von Stein, a writer and maid of honor at the court of Weimar, Goethe admired the infinite beauty and wondered how the gods had allowed the “Green Lord” (as he was sometimes called) to create this.

The Duke of Anhalt-Dessau entrusted the architect F.W. von Erdmansdorff, his travel companion, with the task of shaping the Wörlitz Park, while the master gardener Johann Friedrich Eizerbeck was in charge of all the landscaping work. Everything started in 1764 with a modest corner by the lake, where everything was simple and natural, where a tiny pond was arranged for the swans with a bridge over it, and a linden alley was planted around the meadow. And things were going their way until the flood of 1770-1771, it was necessary to roll up their sleeves and start all over again. It took more than four decades to realize the plan. During that time, ramifications of trails and paths, similar to the intricacies of human destinies, appeared in every corner of the park, channels connected ponds, bridges (from wood to stone and cast-iron) were thrown over water obstacles, sculptures and various buildings diversified the natural beauty of the grounds, as the owner wanted them to be. Where the palace of Dietrich of Anhalt-Dessau was once housed, a golden Dietrichurne was installed. And the gondoliers’ house in the princess’ garden was dismantled in 1934 because it was not needed. 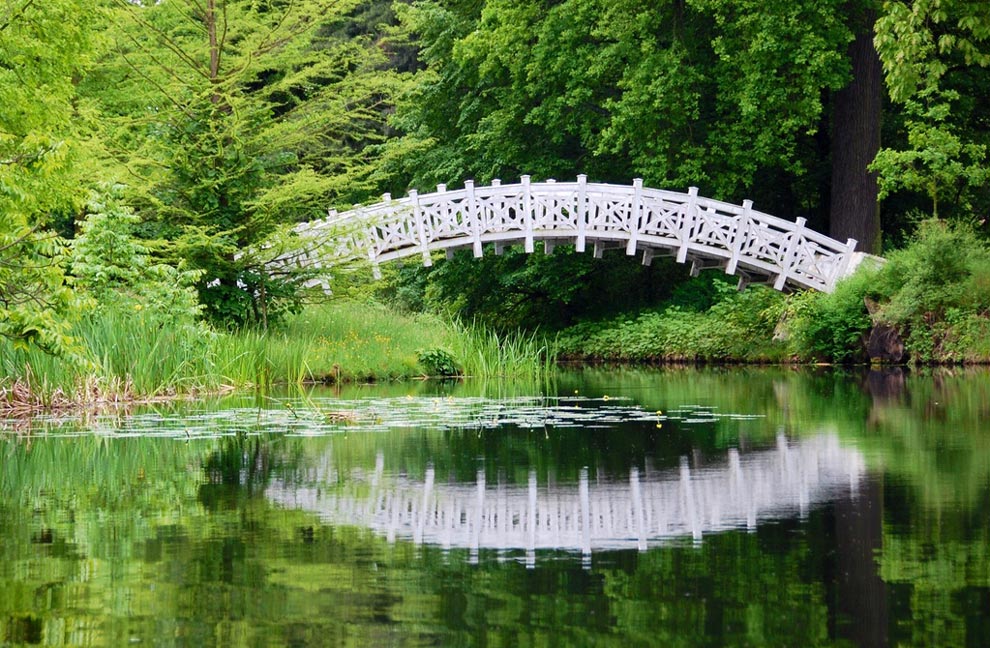 During the construction of the park in 1769-1773, the old castle was demolished and a new one was built in its place for the couple. Under Frederick Franz there were cows grazing in the meadow, vineyards in rows and a small vegetable garden. On a plot originally intended for plant experiments and appeared the princely dwelling. The prince liked the Wörlitzer Schloss so much that he never had to rebuild it again. Over the years the castle became the Gartenreich Museum. The entrance is decorated by the goddess Ceres and Fortuna, the patron saint of fortune. In the palace interiors there is no luxury and abundance, all designed in a simple and concise style. in the courtyard is now located a souvenir store for tourists.

READ
Arcarth Castle in Scotland on the shores of Loch Ness

On the opposite side, where the ferry goes, between 1773 and 1813 built the so-called Gothic house, which now displays Swiss glass from the Middle Ages. White peacocks strutted in front of it, ignoring the visitors.

The gray house nearby, Luise Henriette was built in 1789-90 as a reminder of SheffieldPlace.

In front of the Gothic St Peter’s Church with its 66 m tower a sarcophagus was placed with the remains found during the restoration of the buildings.

Princess Louise also had her own residence – the cozy Luisium palace with a wonderful park, a kind of temple of female virtues, where she strolled along the paths past the concert pavilion, ponds, grotto and lush meadows, resting from the bustle of daily life.

Friedrich Franz, a reformer and humanist who opened libraries, built hospitals and schools and fought for prosperity in Germany, was so enthusiastic about digging artificial channels and cleaning lakes, arranging islands and plants and sculpture-filled parks, that his desire for change, originally a princely whim, evolved into an education of his subjects (no less than 40,000 people) in taste and aesthetic perception of their environment, and became for him a cause of honor. 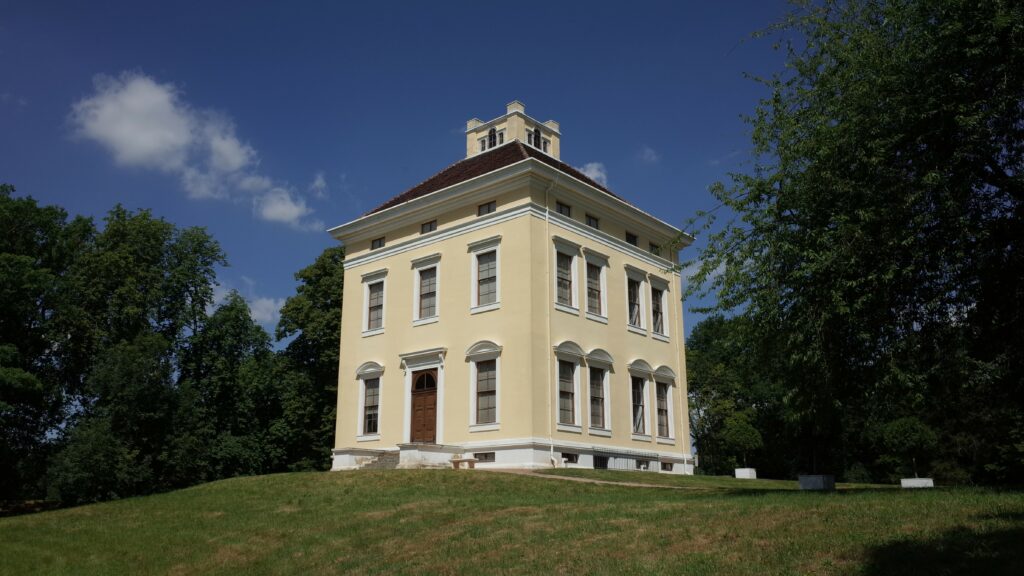 “Prince Franz” of the House of Ascania sought to awaken in them a love of harmony, of culture. The couple in the palace limited themselves to the upper chambers, making a museum on the 1st floor, through which the prince personally accompanied the sightseers and introduced them to the objects of art, showing his collections.

The prince showed everyone the landscape created by nature and the park buildings, which could serve the needs of the household (an example is the house, formerly a cowshed). The inhabitants of the principality appreciated this attitude of their benefactor, respectfully calling him nothing less than “Father Franz”.

No wonder the “offspring” created under his leadership, which is a local landmark, is listed in the Blue Book of Germany, and in 2000 the entire ensemble, No. 534, was included in the UNESCO list of monuments. And you have to see it!

The Dessau-Wörlitz Park Kingdom (German: Dessau-Wörlitzer Gartenreich) is a cultural landscape of European importance in the federal state of Saxony-Anhalt with numerous structures and landscape parks based on the English model.

The park kingdom encompasses an area of 142 km² along the River Elbe in the Middle Elbe Biosphere Reserve. Since November 2000, it has been on the list of UNESCO World Heritage Sites. The complex includes the palaces Luisium, Georgium, Mozigkau, Groskünau, Liner-Berg, Zieglitzer-Berg, Oranienbaum and Wörlitz Park. 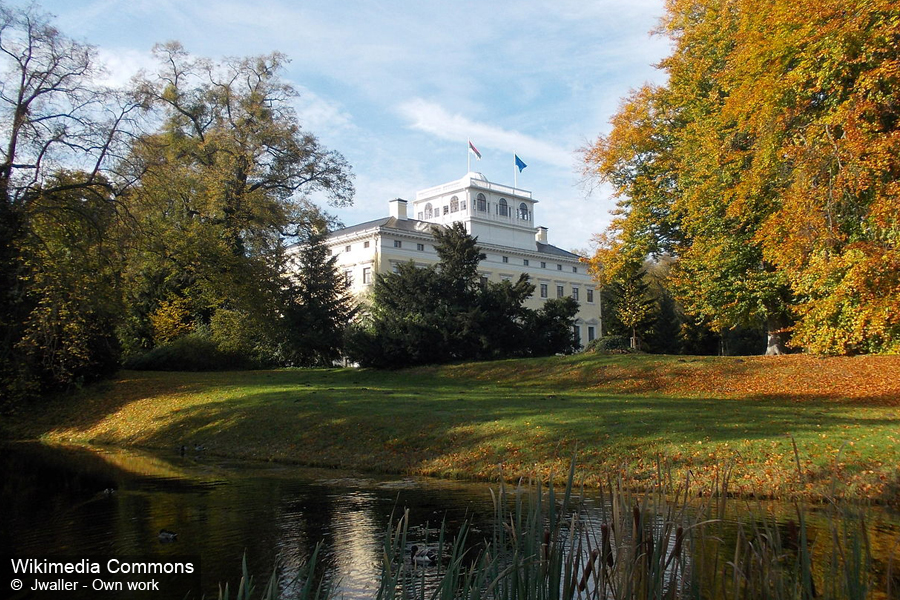 The majority of buildings in the Park Kingdom were erected according to the projects of Friedrich Wilhelm von Erdmannsdorff, one of the founders of German Classicism. The prince got the ideas for the park during his long and extensive travels in Europe.

Few other German nobles have so skilfully transformed the appearance of their estates – in their entirety, not just around their own residences. Kingdoms, principalities, duchies and counties have long disappeared from the map of Germany, but it still remains, at least on the map of tourism – the so-called Park Kingdom of Dessau-Vörlitz. 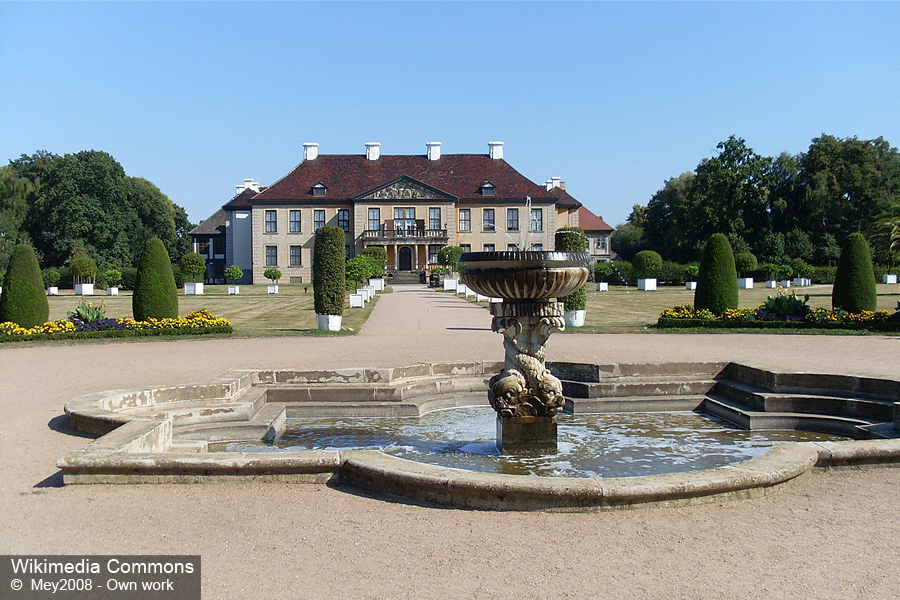 Following the English fashion, the “green lord” as he was called by his contemporaries, turned his German principality into a huge park – with palaces, manor houses and outbuildings, orchards, artificially created picturesque landscapes or transformed natural landscapes. Shady alleys were laid out between individual residences, and the roads built by the prince were generally considered the best in all of Germany at that time. 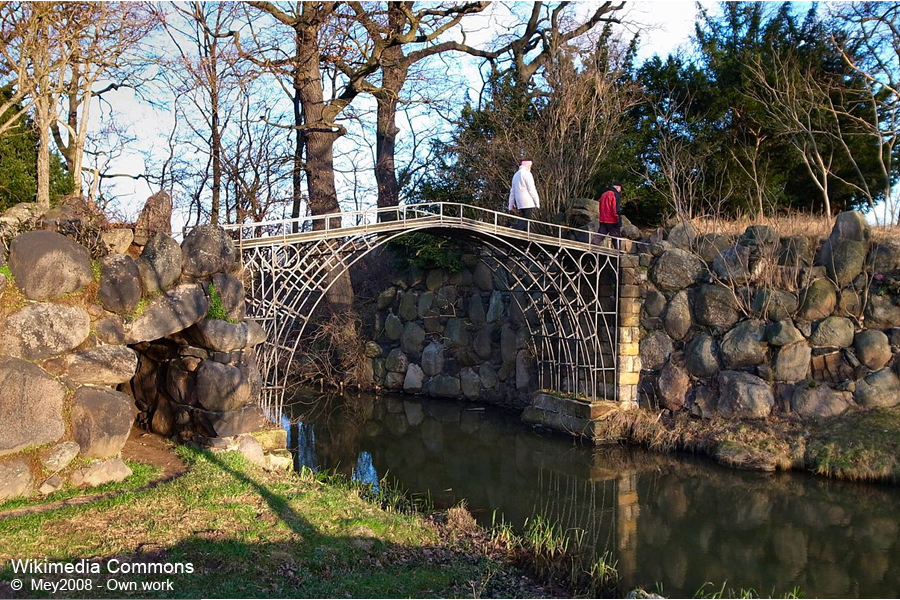 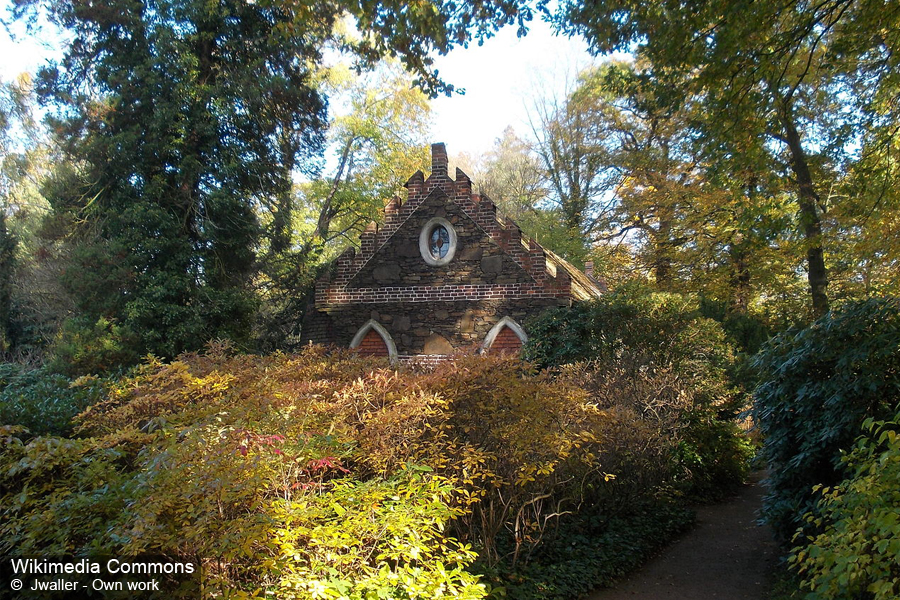 The prince built schools, opened libraries, arranged hospitals, taught his peasants progressive methods of agriculture and willingly acted as a farmer himself. Part of the park was used for economic purposes, so that for its arrangement and maintenance there was no need to levy additional taxes.

According to the ruler’s plan and in keeping with the spirit of the Enlightenment, everything in the park kingdom had to serve as visual aids. With them the prince sought to inculcate in his 35,000 subjects a love of beauty and an interest in culture and the sciences. Numerous collections, ranging from a unique collection of Swiss stained glass to 200 wax models of various fruits, were intended to serve the same purpose. 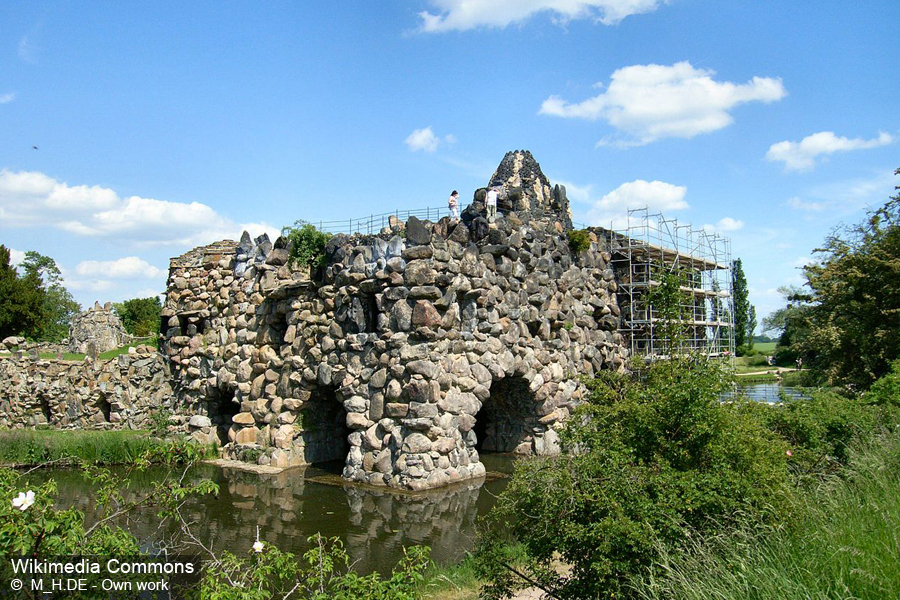 “Father Franz”, as the grateful inhabitants of the duchy called his ruler – which numbered no more than 40,000 – was one of the most important German humanists and representatives of the Enlightenment. The Duchy of Anhalt-Dessau is considered the cradle of these ideas in Germany. It is not by chance that the prince even had an artificial “Island of Rousseau” built in his main Wörlitz Park, with a copy of the French thinker’s tombstone as a symbol of commitment to his philosophy. 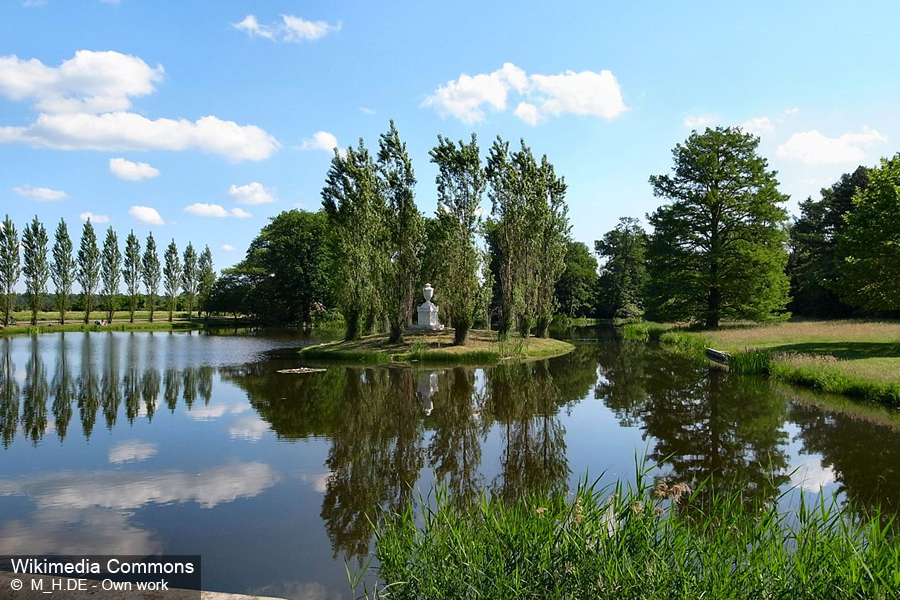 Prince Franz wanted to transform his small territory into a blooming garden, combining the useful and the beautiful. The numerous elaborate structures by the ponds and along the paths linking the far-flung buildings and possessions of the princely family still testify to this today. Here – the playfulness of Rococo and Baroque luxury, there – the refined decor of classicism, framed by a unique park, where the boundaries of the transition from man-made to wild nature remain completely imperceptible. 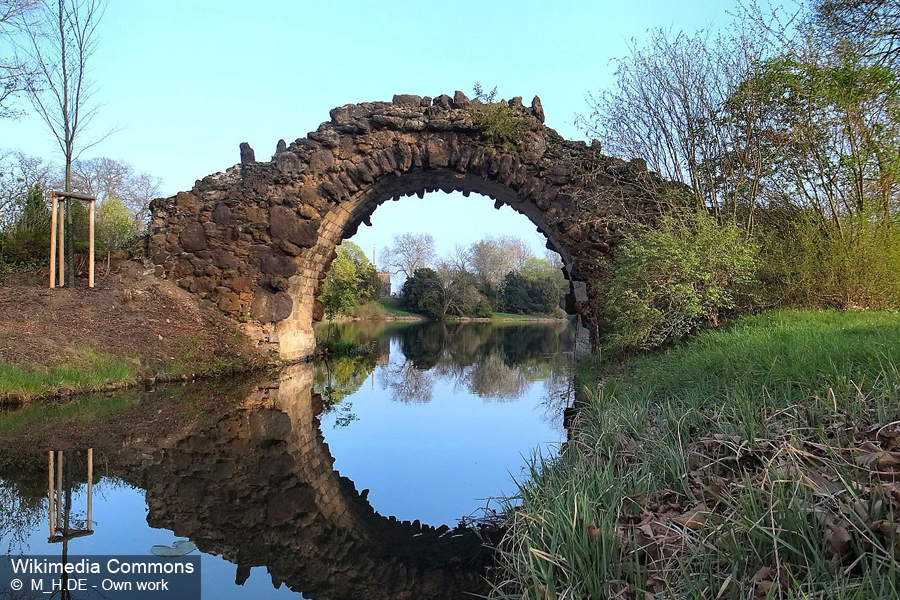 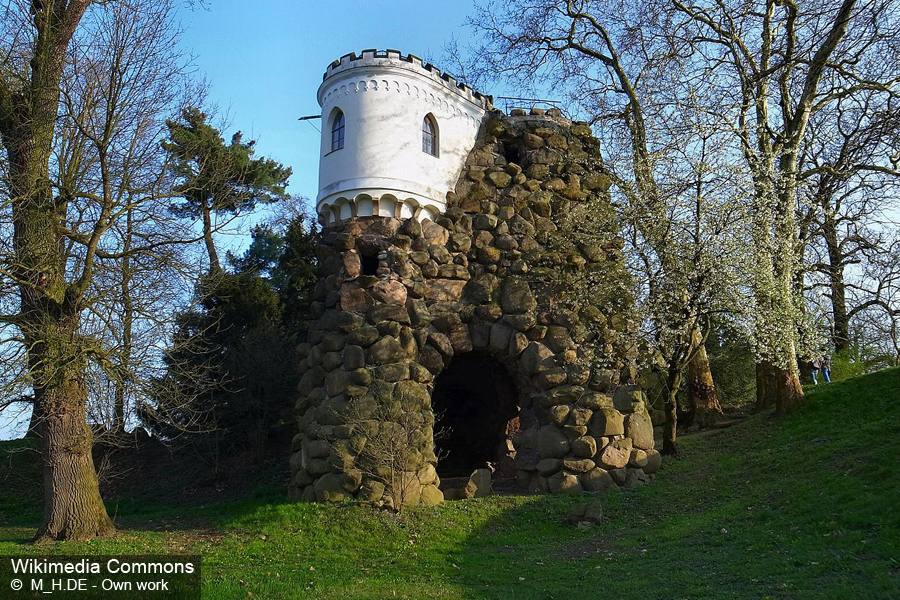 It is no coincidence that the prince’s guests included the encyclopedic scholar Alexander von Humboldt and the poet Johann Wolfgang von Goethe. On May 17, 1778, Goethe wrote from Wörlitz to Charlotte von Stein: “It is infinitely beautiful here. Yesterday evening, as we were leisurely admiring the lakes, the canals and the cosy corners of the park, I was literally moved that the gods allowed the prince to make his dreams come true here… One by one the views change, what a leisurely variety. Not a single elevation slows down the gaze, nothing binds it to one point. You glide without asking where you start and where you finish. … Everything here evokes the purest fascination. 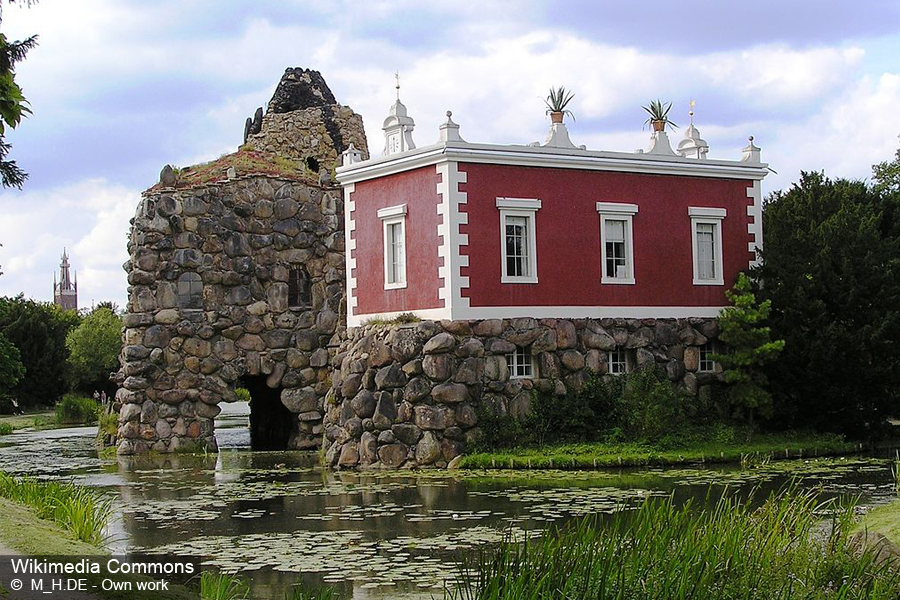 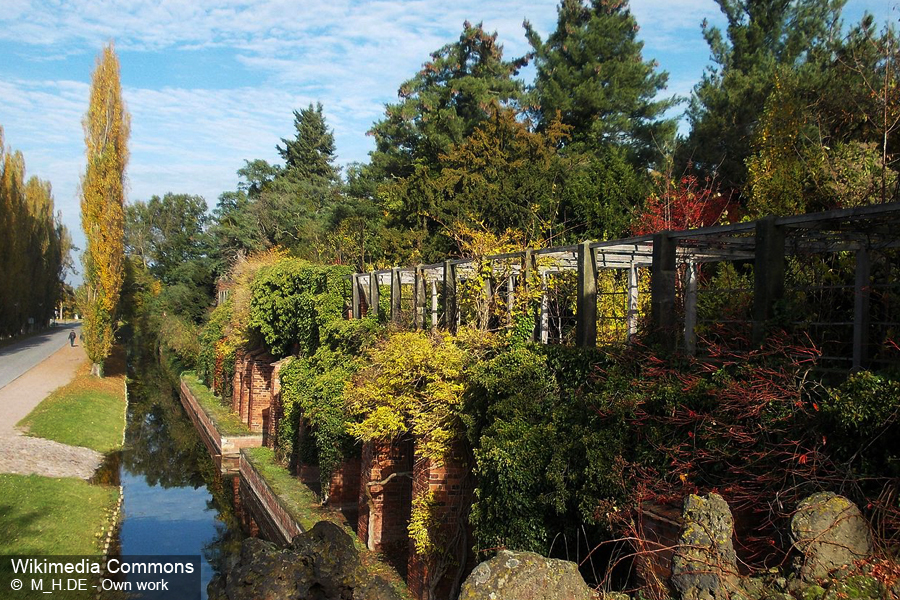 Here on the artificial island there is even its own “Vörlitz Vesuvius” – a prop volcano, a miracle of pyrotechnics and special effects. After a long break it woke up in 2005-2006, delighting the public with demonstrative eruptions.

Already in the second half of the XVIII century access to the princely parks was open to all comers – at the will of the prince himself, who thus hoped to instill in his subjects a sense of beauty. Sometimes the prince himself even led guided tours around the palace, showing his rich art collection.