Located on the island of Hon Tre (called “Hon Che”), 3.5 km from the beach in the south of Nha Trang. But with the light hand of the creators of the entertainment industry it began to be called the island Winperl . Even put a sign on the mountain (as in Hollywood). Now at Wynperl they are expanding the territory, poured even more space and build new entertainment. So the island is a little closer to the shore. 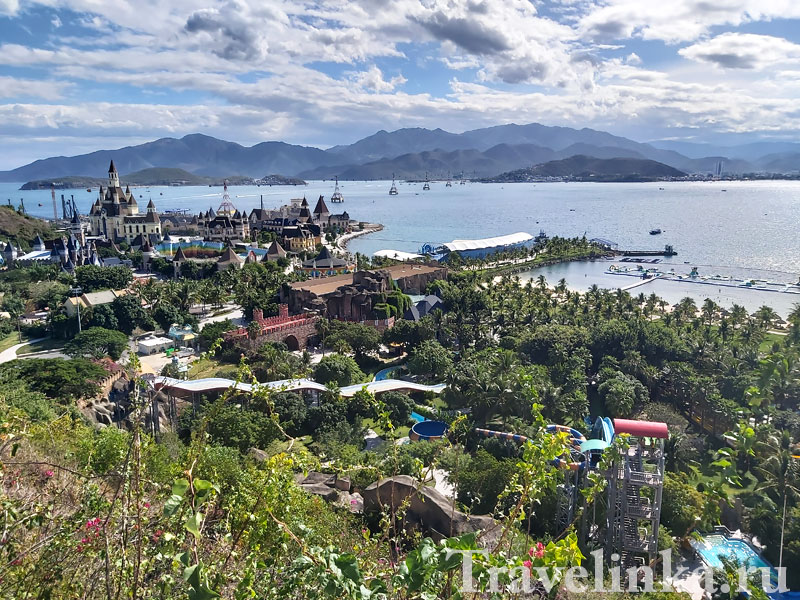 The island of Vinperl can be seen from anywhere in Nha Trang, especially the huge Ferris wheel, which is beautifully lit in the evening. For tourists it is one of the must-visit places, but by the way, the most expensive in price of the nearest to Nha Trang.

The park closes at 9 pm, but after 7 pm there is not much to do. Attractions after 6:30 pm run only when there are a certain number of interested parties. 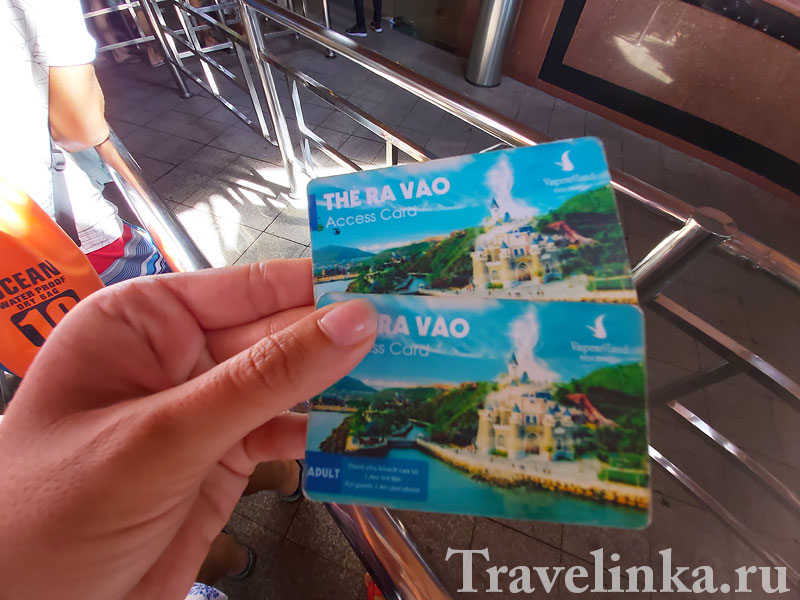 Discount tickets are sold at travel agencies around town. Get a plastic card, it is valid for 2 weeks. At the Winperl box office there are not long lines, because everyone buys tickets in advance. At the entrance, you have to put the card into the turnstile and pass. You don’t need a card anymore, all the entertainment on Wynperl Island is included (you only need to stand in line), except for water sports, zip line. 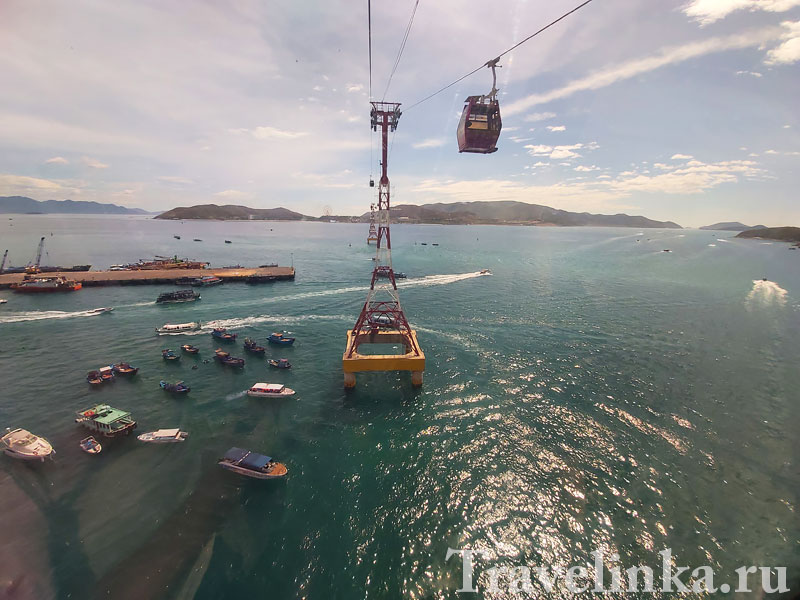 Cableway to the park Winperl Vietnam

Winepearl Park Vietnam: How to get there

The cableway over the sea leads to the Winperl amusement park in Nha Trang (it used to be considered the longest, but now they built a bigger one). Its length is more than 3000 meters. This is a kind of entertainment. It is possible to get to the bottom station of the cable car to the entertainment island of Wynperl on your own: 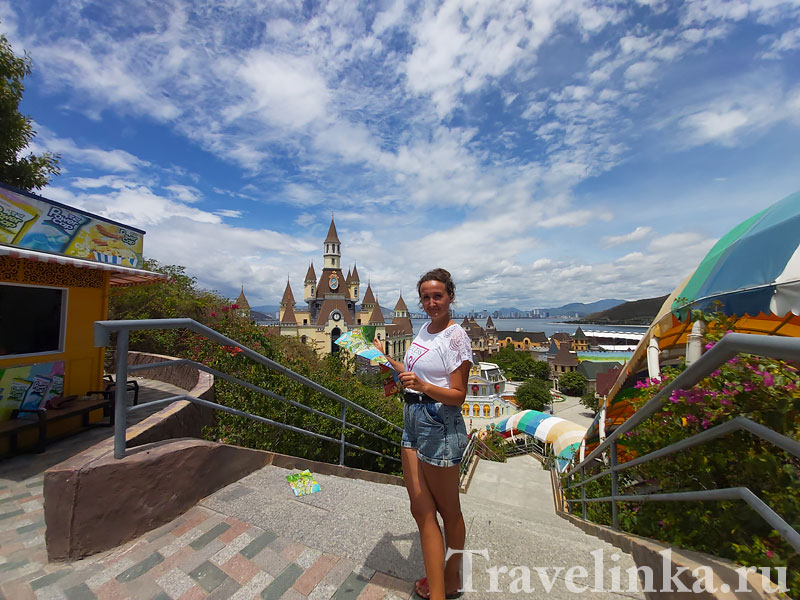 What is waiting for you on the Wynperl Island in Nha Trang? There are several themed areas: rides, water park, beach, zoo (giraffes, rhinos, monkeys, etc.), greenhouses with flowers and parks . Inside there is also: 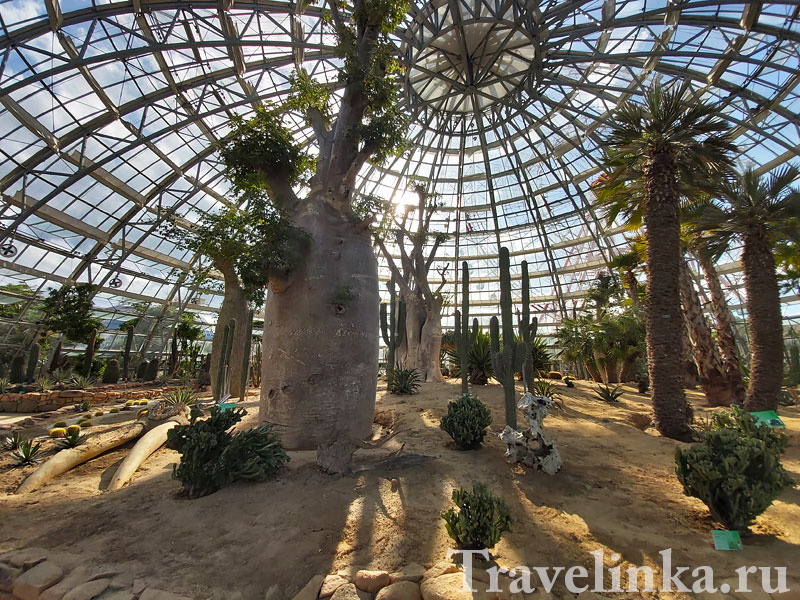 The island turned out to be a chic oceanarium. There are even small sharks and rays swimming above you, as well as a sculpture of a mermaid. There is a huge musical fountain and a 4D movie theater. The effect of the quality of the picture volume is incredible. But they show children’s cartoons in English with Vietnamese subtitles.

The most popular attraction is the electric sled. You have to go all the time downhill, and you regulate the speed yourself with the handbrake. Again, the main thing is that there are no Chinese people in front, who are always braking. Workers attraction, as they see the Russians, wait 3 times more time before starting on the track. But this does not help either, meet someone in the middle of the track, you have to slow down.

The main contingent of holidaymakers in Wynperle – the Chinese . The ratio with the Russians is about 90% to 10%. In general, the Chinese are the main stream of tourists in Nha Trang. They go in droves to this resort for 3-4 days, they have established communication (about as we have in Turkey). And for example on Fukuoka or Dalat, there are no Chinese.

All the entertainment adapted for the Chinese. That is, all water slides are such that you can get your feet in the pool (most Chinese can not swim). Amusement rides are also not scary (more designed for children). 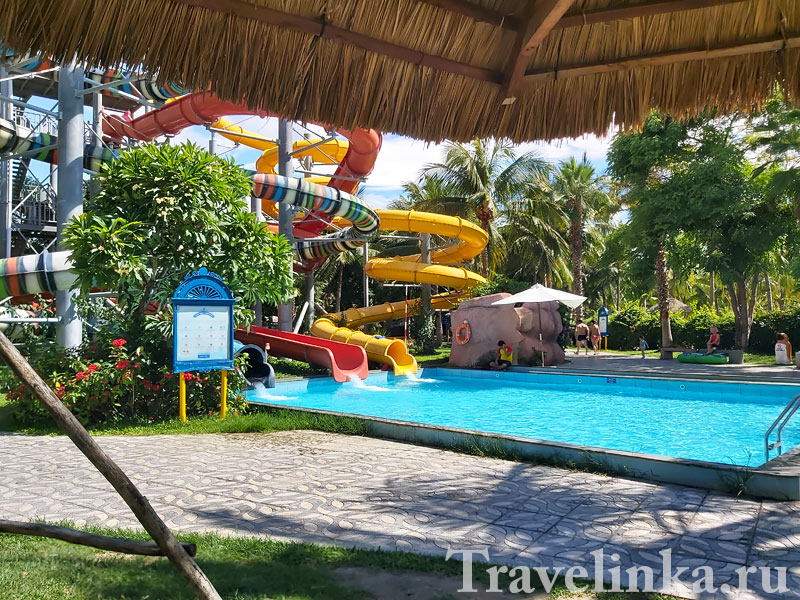 If you are going to visit Wynperl amusement park in Nha Trang, here are some tips. 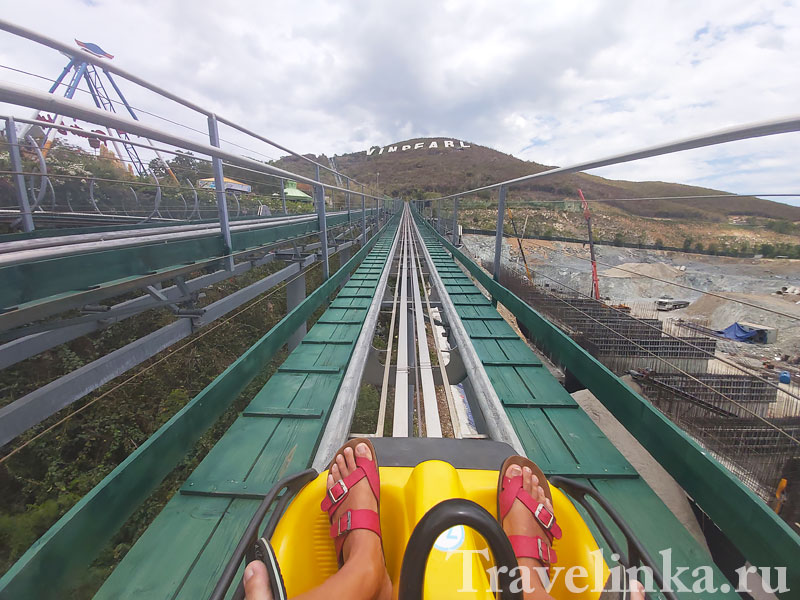 Electric toboggans at the Wynperle in Nha Trang

I liked the Wynperl, the territory is huge, and for the whole day you can not go around everything. Cool safari area with animals, exotic plants from different parts of the world – orchids, baborabs, cacti. Aquarium, dolphinarium. Lots of activities for children.

The coolest island. We also went to Orchid Island and Monkey Island. There are more orchids in Winperl than on the whole Orchid Island, there are monkeys too. Better than going to other islands, only difference in price, Winperl costs 4 times more.

The park is more for kids and Chinese. The rides are boring, all sorts of assholes are always slowing down on the sled, free fall is not scary. At the same time, the Chinese yell like they are breathtaking. Queues are kilometers long, it takes two hours to get on the sled. There are not even drinking fountains, and this in the 30-degree heat. Water is the cheapest 15.000 VND, at the entrance shmanayut bags, nothing to bring their own. The food is expensive and tasteless. The park at one time. No desire to go more. And for such money.

Were in PortAventura, came to Nha Trang – well, such. In Spain, even though it is more expensive, but there we went out of the attraction and our knees are trembling, and here we are in some kind of kindergarten. 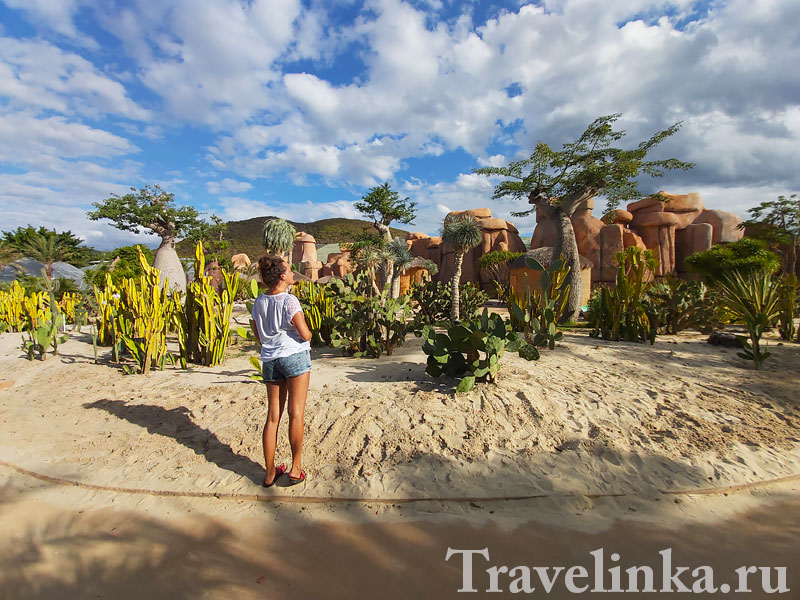 Now you know about the island Winperl in Nha Trang, prices, reviews, photos and description. It is definitely worth a trip, especially if you have not been to other places of entertainment in Asia (Sentosa Island, for example). We went to Wynperl in Nha Trang after Wynperl on Phu Quoc. There is a difference, on Fukuoka a gorgeous huge safari, lots of wild animals in the natural environment, here the small pens for animals and all. Very pitiful screaming from someone in the enclosure, the animals panicked. The entertainment part on Fukuoka is separate, and here everything is together. In our fastidious opinion rating Vinperlu in Nha Trang – 6 out of 10. Its worth its money only for children. Adults might be boring. If you have nothing to compare it with, of course you will like it.

To the island where the amusement park is located, right above the sea stretches a cable car with a length of 3320 meters – the world’s longest cable car over the sea . Even the ride to the island itself is mesmerizing with stunning views of Nha Trang Bay – don’t forget to take photos! 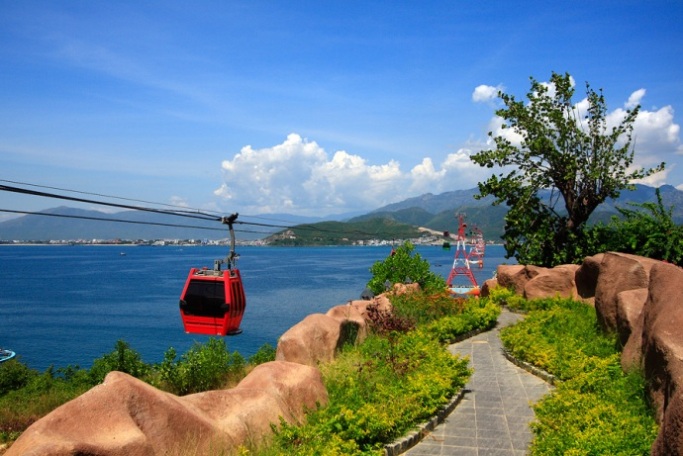 Tips for visiting the park

Listed below are the main rides and activities you can visit at Wynperl Park in Vietnam in 2018.

In addition to water slides, pools and an aquarium, the standard set of attractions inherent in an amusement park is also presented here, from roller coasters to merry-go-rounds and a Ferris wheel. Part of the entertainment is concentrated in the artificial mountain range.

As in the case of the water park, you can ride the rides relentlessly for hours or even all day. Be sure to take an electric sled ride – all tourists who have been to Wynperl leave rave reviews about the trip.

Great video about the entertainment at the Wynperl Park in 2018:

The attractions of the water park Winepearl include many water slides with different names: “Black Hole,” “Tsunami,” “Kamikaze” and others. There is a 500-meter “lazy river”, on which you can leisurely ride on a tubing. Another interesting amusement is the tank, where you can simulate the sea weather, from a slight quicksand to a violent storm.

Rides and slides in the water park is divided into three zones: children’s, family and extreme-zone. For children there is a special shallow pool, and next to it there are sun loungers and umbrellas, where parents can watch their kids.

Slides and pools work to a certain schedule – the schedule can be found at the entrance to the water park. The water park itself is open from 09:00 to 18:00.

The interior of Vinpearl Park in Nha Trang has a karaoke room and halls with all sorts of arcade machines – it will be interesting for both adults and children.

Nearby is a 4D movie theater, which simulates rain, wind, smoke, snow, earthquake, heat and other weather effects. From visiting the cinema tourists leave different reviews – some are not impressed, and some really like it.

In the same building there is a children’s room, where you can leave your child under the supervision of the park’s Winperl staff or even put him to sleep.

There is a huge aquarium “Underwater world” in the territory of the park Winperl, at the bottom of which there is a glass tunnel with a moving track. In this aquarium visitors can see no less than 300 different species of colorful fish and other sea creatures.

The aquarium area is divided into sections based on the climatic conditions in which the fish live. The Underwater World Aquarium in Wineperl is the most modern and beautiful aquarium of its kind in all of Vietnam.

Dolphin and Navy Seals show is enjoyed by adults and does not leave children indifferent. The animals perform tricks, dance, and greet the audience. The show takes place at a place called Dolphin Lagoon, to the left of the entrance to the water park (#42 on the map of Wynperl). 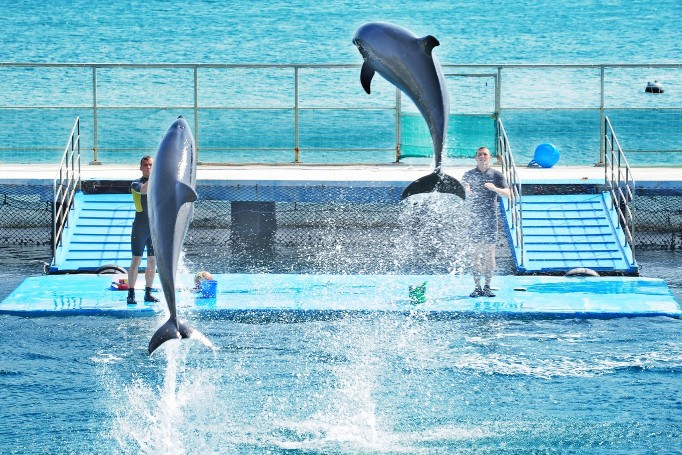 In the evenings there is a fountain show. Especially for this in the park built amphitheater for 5000 seats. The show is very colorful and bright, with great music – we recommend a visit!

Schedule for the show of fountains at the Whirlpool: 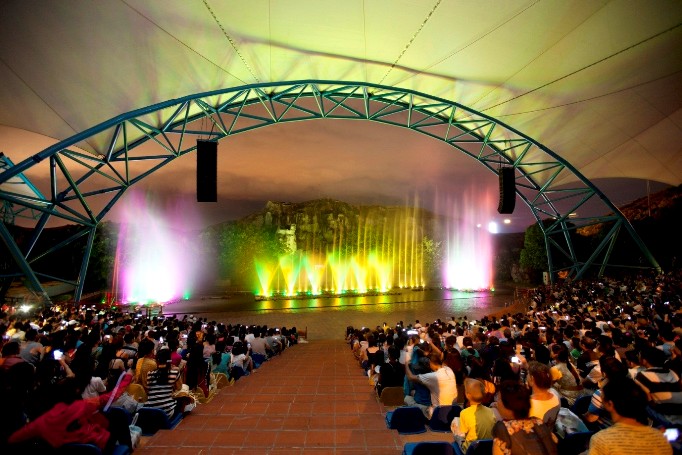 There is a 400-meter long white sandy beach in the park where you can relax and watch the sunset. There are practically no waves in the sea on this side of the island, so Vinperl beach is great for holidays with children.

There are also several restaurants belonging to the Vinpearl Luxury Hotel where you can enjoy Vietnamese cuisine. 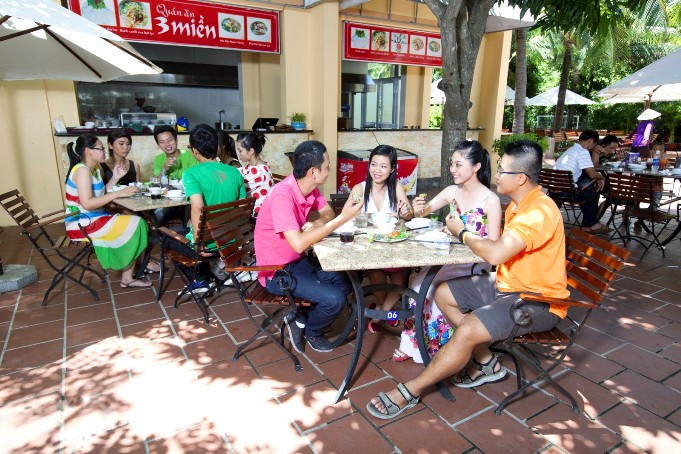 There is an entire street on Vinpearl Island with many stores and boutiques where you can buy everything from brand name clothing to jewelry and souvenirs. The whole area with stores is called Vinpearl Land Shopping Mall and is to the left of the cable car if you look from the Nha Trang side. 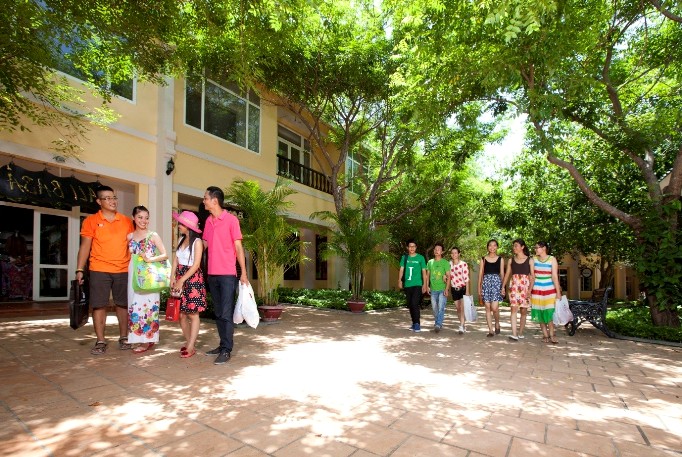 The cost of Wynperl Park in 2018 (prices from the official website):

Ticket prices in Russian are also listed on the booth next to the park ticket office . With a “all-day” ticket, you can go to any slides, rides and attractions an unlimited number of times.

At the ticket office you will also get a free map of Winkler in English. All the rides and attractions are marked on the map to help you get your bearings.

There are several good hotels (most are 5-star) on the amusement park island for the convenience of visitors. One of the main advantages of staying at them is unlimited free admission to the park. These hotels are: 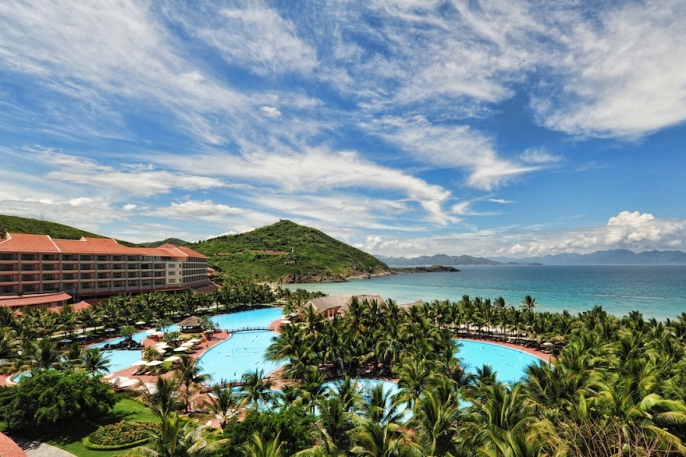 How to get to the Wynperl Park in Nha Trang

Wynperl Park is located on a separate island in the southern part of Nha Trang.

There are two ways to get to the cable car that leads to the island on your own:

Use our bus route map to see where to take the bus to Winperl Park:

Vinperl Park on a map of Nha Trang and Vietnam

Click the menu button in the top left corner and select the Attractions category.