Yakushima is an island city in Japan

Yakushima Island is an almost regular circle with a diameter of up to 28 kilometers. The length of the coastline is just under 90 km. Its area is 504 km2 . The highest point – mountain Miyanoura – is located approximately in the center of the island. Its height is 1935 meters.

Just a mile and a half to the northwest is another imposing mountain Nagatadake 1886 meters above sea level. Apart from these, there are another 30 peaks on the island that are over 1,000 meters high. And they are scattered fairly evenly over its territory. The basis of the island is granite, and there are no active volcanoes, but there are many hot springs.

Yakushima has been inhabited since at least the Dzemon period, which dates back to 1000 B.C. The island is first mentioned in the written records of the Chinese Sui Dynasty in the 6th century, as well as in Japanese records from 702.

Traditionally, the island’s economy has been closely linked to forestry and the export of timber products, as well as the practice of fishing on an industrial scale. These industries have now been supplemented by the cultivation of oranges and tea, tourism, and the production of shoyu (an alcoholic beverage with a strength of 45 o, produced by distillation).

More than 50% of Yakushima’s electricity is generated by hydroelectric power plants.

The island became a site for the production of hydrogen gas in an experiment by Kagoshima University and a test site for Honda’s hydrogen-fueled car research.

Note the island of Aogashima, part of the Japanese Islands. It is no less interesting island, where people live in the mouth of a volcano.

The climate of Yakushima Island

Yakushima Island is the southernmost place in Japan where there is snow in the mountains for several months. But the ocean temperature never drops below 19o C. 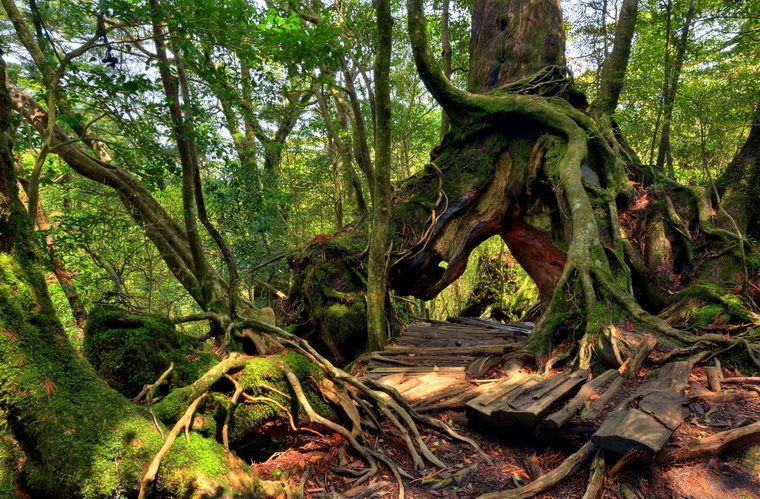 The tropical forests of Yakushima Island 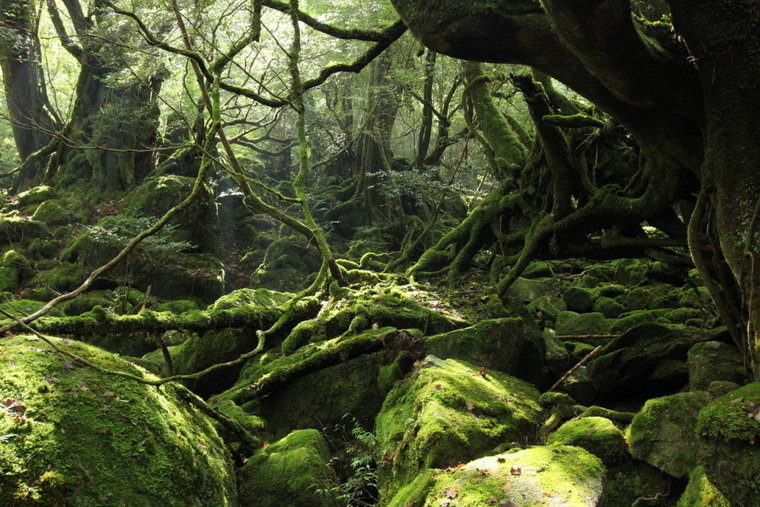 The only large animals that live on the island are Yakushima macaques and spotted sika deer. Japanese raccoon dogs, also known as tanuki, can be seen. Japanese weasels are occasionally spotted. On the island, migrating sea turtles lay their eggs. Dolphins appear in the open sea. The coastal areas are rich in coral reefs.

Yakushima is famous for its lush vegetation. Most of the island is part of the Kirishima-Yaku National Park. The main part of the island is covered by tropical forest. A common tree is the sugi, an evergreen tree known as the Japanese cedar, which reaches an age of over 1,000 years. There is a specimen of such a tree on the island named Zemon Sugi, which is estimated to be at least 2170 years old. In addition, there are more than 50 varieties of endemic flowers, several species of rhododendrons and hundreds of rare species of mosses, as well as several varieties of endemic trees.

Yakushima macaques on the island The spotted deer of Yakushima Island

Besides the amazing nature and mild climate, the island has several worthy attractions.

You’ll find Senpirono Falls on the southeastern part of the island, 2 kilometers off the coast

Yakushima Island is located 40 kilometers south of Kyushu Island. About 13 thousand people live here. Most of the island (90%) is covered by forest, and on Mount Miyanoura grows ancient cryptomeria “Jomon sugi”, which is over 7000 years old. In 1993, the value of Yakushima’s unique nature was recognized and the island was included on the UNESCO World Heritage List.

Yakushima can be reached from Kagoshima by plane (1.5 hours) or by ship (2-4 hours).

Most of the local attractions are natural, so if you are a connoisseur of natural beauty, make sure to visit Yakushima.

This ancient tree is the symbol of Yakushima Island, recognized as a world heritage site. It is the largest sugi tree in Kumaga County.

Sugi Yakushima trees are the name of cedar trees over a thousand years old that grow in the mountains of Yakushima Island at an altitude of over 500 meters. The Japanese believe that these trees, which are often more than 2,000 years old, have spiritual power.

The trunks of Yomon Suga trees exceed 16 meters in diameter and reach 30 meters in height. Their age, according to various data, ranges from 2,100 to 7,200 years. The way the trees are arranged and the riot of vegetation around them create a unique impression of fortitude and vitality. No wonder they have become the symbol of Yakushima Island.

To see these amazing trees, visitors must register and then climb the mountain for 8-10 hours. It should be remembered that you should not approach the trees closely – for the sake of their preservation, the inspection is made from a wooden platform 10 meters away from the tree.

This valley, which covers an area of 4.23 square kilometers, is located next to the northern Siratani River. Today it has become a health forest. A variety of trees can be appreciated in the evergreen forest area, including matilus, haemlock, fir, racemosum, salicinum, and others.

This is a very valuable site, as a large number of Yakusugi cedars have been transferred here in stages. There are also several famous cedars here, such as the 3,000-year-old Yayoisugi, Bugyosugi, and Nanahonsugi. In addition, granite rock streams flow throughout the forest.

These trees grow downstream along the Nakama River in the southern part of Yakushima Island. The banyan trees, some more than three hundred years old, grow in beautiful branching arches. This place is often used as a film set for television programs.

Among the waterfalls of Yakushima Island, the Eye Falls are considered the largest and with the largest volume of water. It is also listed as one of the “100 Waterfalls of Japan” which has been selected by the general public.

The beautiful cascade of waterfall streams and the 88-meter-high sedimentary cliff is a very picturesque place. Anyone can walk to the base of the waterfall and feel the refreshing negative ions in the air. However, on rainy days or after rains, the water level rises, so you may not be able to approach the base.

Near the waterfall are the Okawa Springs. These springs are among the top 100 in Japan, and the health benefits of drinking water from them have been extolled since ancient times.