Yonaguni is an underwater city. Japan

Japan is an island nation, which includes an impressive number of islands. Most of them have something unusual. Think, for example, of the smallest municipality on the volcano island of Aogashima.

Now we will tell you about another Japanese island, located in the westernmost part of the country. It’s Yonaguni Island. But it’s not really about the island, although it undoubtedly has an appealing island charm. We, like the rest of the world, were interested in its coastal waters. Or rather, what is hidden in them. In the 1980s, something was found off the coast of Yonaguni that defies the very history of the world.

The island itself is known among divers as one of the most picturesque places to dive. A large number of hammerhead sharks can be seen in the vicinity. They are mostly safe for humans (but that doesn’t mean they don’t attack) and are very graceful. Therefore, many divers come to the island.

Yonaguni has special diving schools and its own tourist association. So one day in 1986, Kihachiro Aratake (at that time the director of the island’s tourist association), while searching for new places to dive, came across surprisingly flat and regular rock structures at a depth of a few meters. They were very reminiscent of the structures, rather like pyramids. One of them went down 25-27 meters to the bottom and had very flat planes. 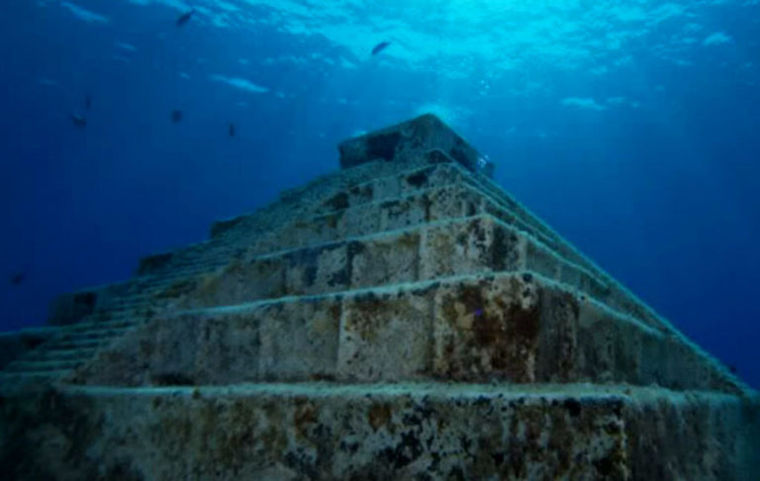 In many sources such photo appears, but in fact there is no such pyramid in Yonaguni.

After several dives it was established that the dimensions of the underwater complex are approximately as follows: the central part has a height of slightly more than 40 meters and a base of 180 by 150 meters. The surfaces of the pyramids have steps, diamond-shaped ledges and smooth edges. Located underwater pyramids near the shore at a depth of 25-30 meters.

Yonaguni on the map

READ
The Bermuda Triangle and its terrible secrets

This attraction of the world has no specific name. Usually it is called “Pyramids of Yonaguni” or “Underwater City of Yonaguni. But in any case, if you hear the phrase with the word Yonaguni, then most likely we are talking about this underwater complex.

An interesting fact is that the Monument of Yonaguni somehow did not interest the world’s scientific community. The underwater city has been virtually ignored by archaeologists. The pyramids were discovered in 1986, and the first scientific expedition took place only in 1997. The money for the research was allocated by Yasuo Watanabe (a major industrialist from Japan). The expedition included, in addition to professional divers and the Discovery Channel film crew, Graham Hancock and Robert Schoch.

The theory of natural formation

Graham and Robert put forward the theory that the underwater pyramids of Yonaguni are the result of natural forces. In particular, this is indicated by the composition of the monument. It is sandstone, which can be cracked, forming regular geometric shapes. Sandstone layers have an interesting property of stratifying at an angle of 90 and 60 degrees to each other. In the process of stratification, they form such interesting structures.

And in this part of the world periodically earthquakes take place. This makes the sandstone even more susceptible to cracking. However, the members of the expedition suggested that human influence can not be completely excluded. Perhaps these are ancient mines or quarries. But nevertheless the main accent was made on natural occurrence of Yonaguni pyramids. 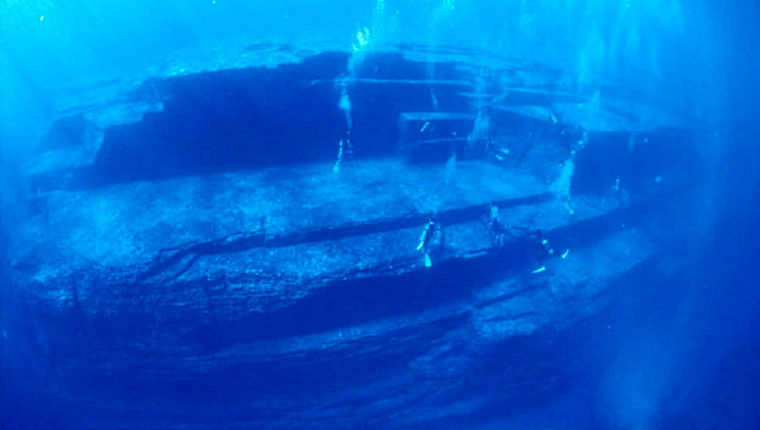 Evidence in favor of artificial origin of pyramids

Probably the mystery of pyramids would be attributed to nature, if Masaaki Kimura, professor of the Japanese Ryukyus University has not interfered. Having dived to the Yonaguni monument and examined it very carefully, Kimura began to insist on the version of artificial origin. As evidence, he presents a number of facts. 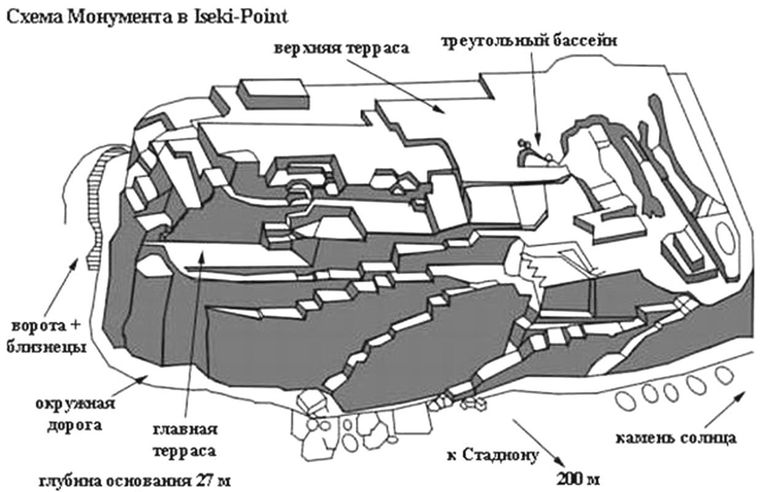 Robert Schoch, who was part of Graham Hancock’s expedition, originally stuck to the version of natural formation of the monument, but after meeting with Professor Kimura, partially changed his mind. Both scientists agreed on the theory that the monument itself is most likely of natural origin (that is, the rock has not moved or erected anywhere), and that the flat surfaces, right angles and other non-standard for nature structures are the work of man.

For example, this massive formation, nicknamed “Turtle”, is out of the theory of the natural origin of the complex. 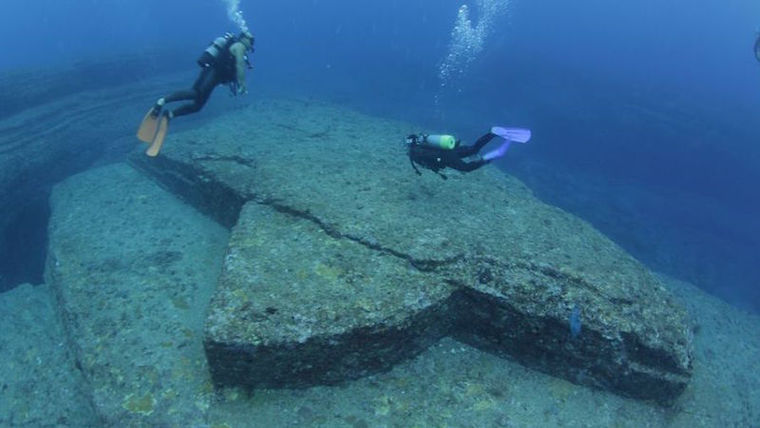 This formation is called the Turtle. Don’t forget to read at the end of the article a summary of a legend, possibly related to the Pyramids

Scientists are also arguing about the age of the underwater city. Analysis of the stalactites found in the cave near the pyramids suggests that they are at least 10,000 years old. As stalactites cannot be formed in water, we come to the conclusion that the entire territory of the pyramids was submerged just 10,000 years ago. This fact also challenges the official history according to which 10,000 years ago the man was still huddled in caves and hunted mammoths. Naturally, he “did not grow up” up to construction of such pyramids in those times. From here it turns out the following: or generally recognized history is not quite true, or … one of two. Probably that is why the scientific community did not take this discovery seriously. But Masaaki Kimura himself believes the pyramids are about 5,000 years old and were only submerged 2,000 years ago due to an earthquake.

Scientists are still arguing about the age of the find and its origin. In any case, the discovery of the pyramids of Yonaguni is an important step in the exploration of our planet. After such a find, Yonaguni became known not only to all divers and scientists, but also to many fans of the search for ancient civilizations. It is no secret that there are still undiscovered underwater attractions on the planet, such as the famous Bimini Road in the Bahamas.

Interesting facts about the pyramids of Yonaguni

The Underwater City of Yonaguni in the photo 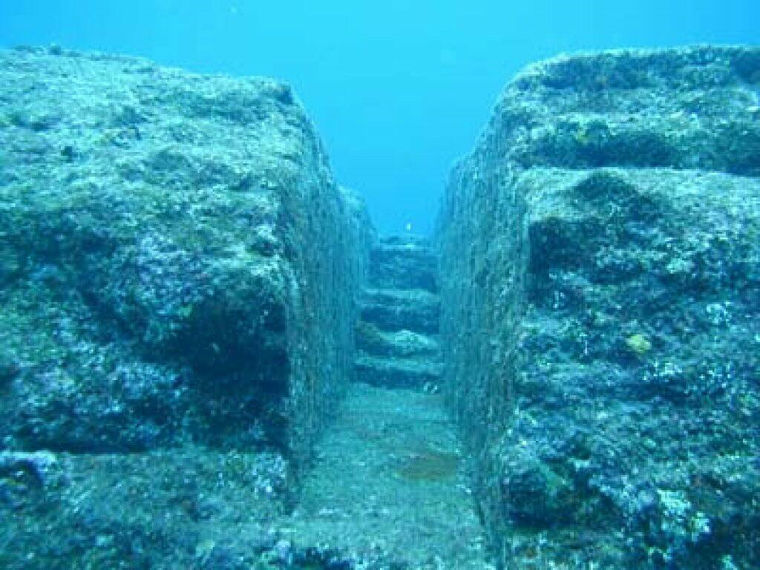 The mystery of Yonaguni Island: Who built the underwater city off the coast of Japan 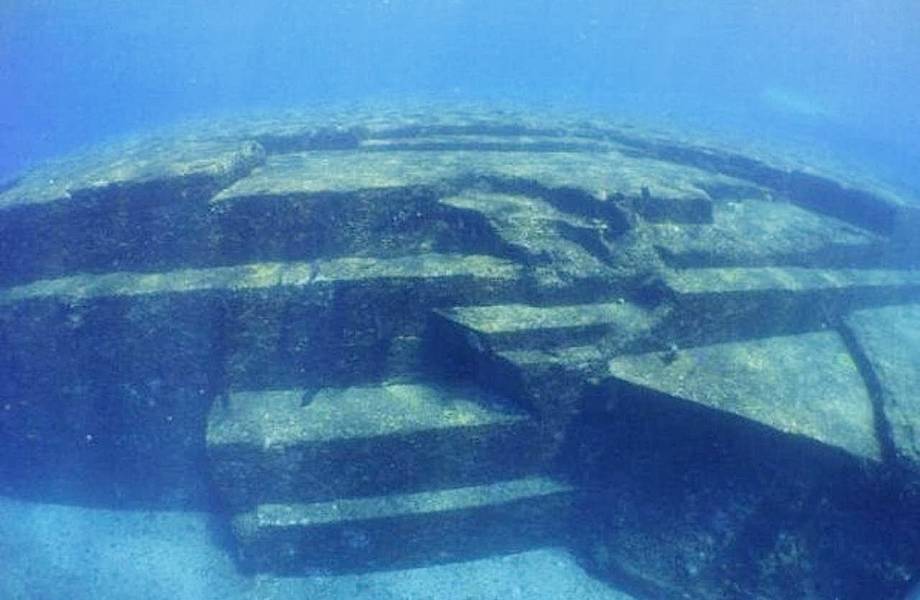 The scientific world has not yet come to a consensus on the origin of this mysterious object. Although more than 30 years have passed since the discovery of underwater stone structures near Yonaguni Island, there are still more mysteries than answers around this place. 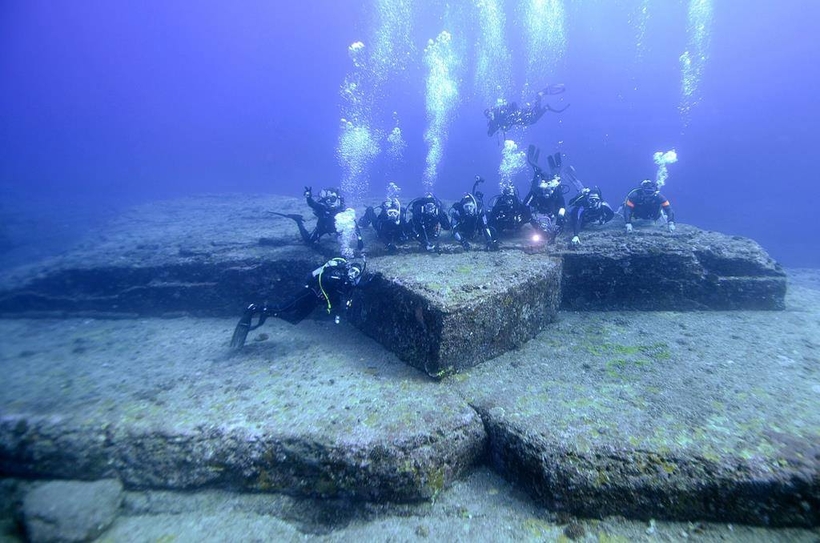 The sensational find, as is often the case, was discovered completely by accident. Kihachiro Aratake was working as a diving instructor near the southern Ryukyu Islands and during one of his dives he discovered strange rocks that looked very much like man-made structures. The amateur diver told the world about his discovery, and scientists, journalists, and all people who are not indifferent to the find rushed to the southern shore of Yonaguni Island. 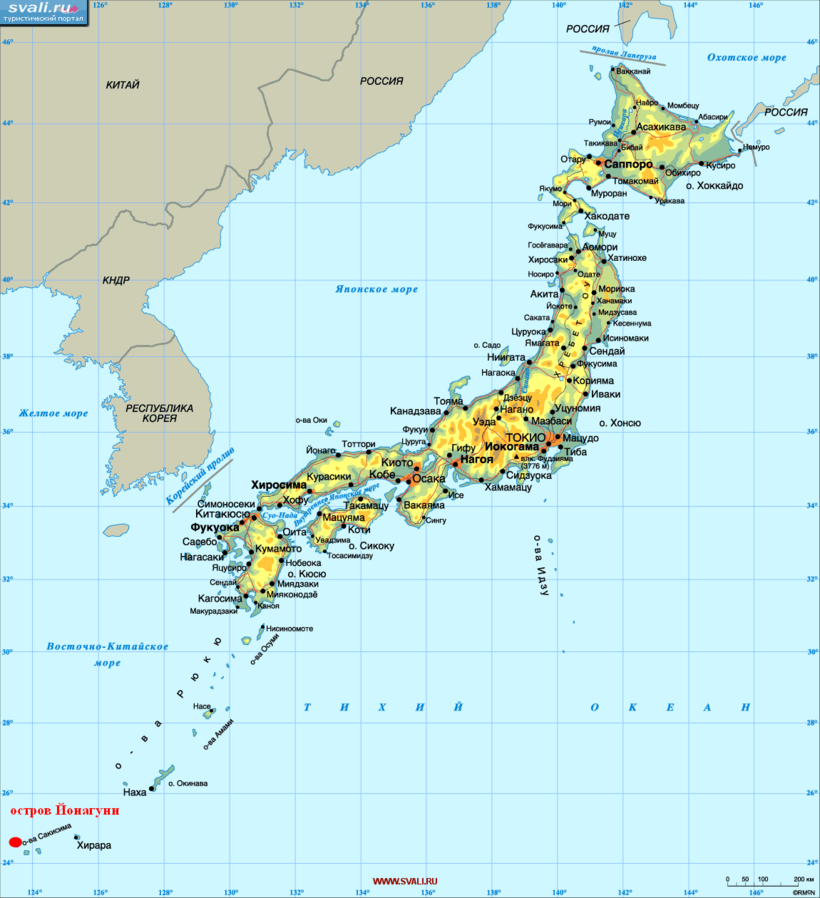 The stone formations have a stepped shape resembling a pyramid. The basis of the construction is a stone slab, its dimensions are approximately 200 by 150 meters. The stone terraces and platforms with traces of processing led scientists to believe that the object is of man-made origin. In favor of this version speaks the fact that around the structure passes a stone road and there are fences made of boulders of limestone. According to Masaki Kimura, a scientist who devoted many years to research of the underwater pyramid, this kind of limestone is not typical for this region and most likely it was delivered here specially for building. 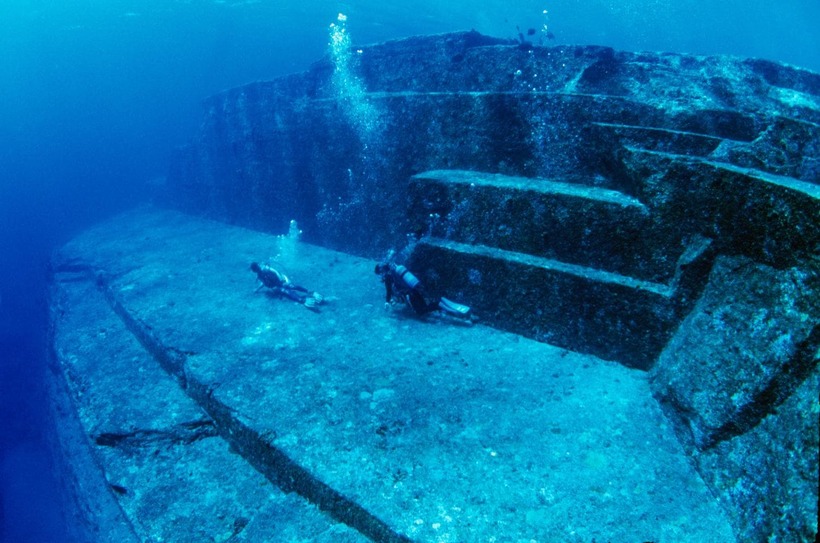 Besides neat blocks of stone, stacked in the form of steps, under the water near Yonaguni Island were found round holes, traces of stone carvings, images of animals and even mysterious writings, which have not yet been deciphered. According to Professor Kimura, these are none other than the remains of an ancient city that was submerged by the destructive earthquake. It should be noted that this place is one of the most seismically active regions of the world, so the version with the earthquake seems quite plausible. In addition, there are other structures on neighboring islands that have common features with the underground city, such as parts of the Nakagusuku stone castle. 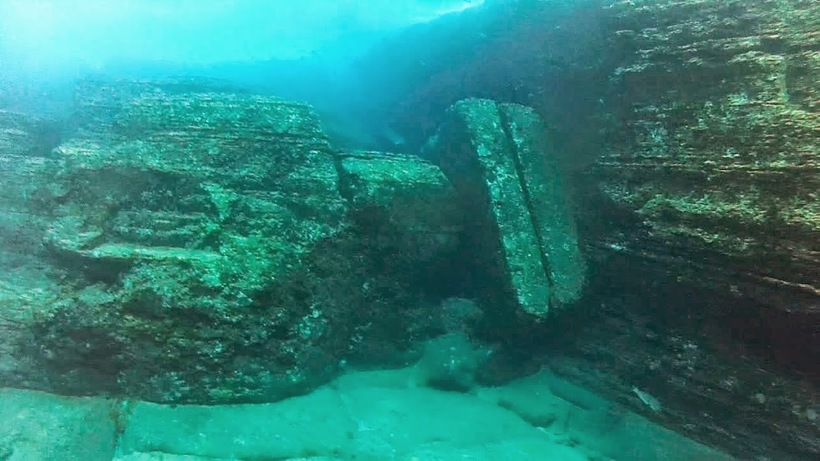 According to Professor Kimura, the underground structure is at least 10,000 years old. He drew such conclusions based on a study of a cave that was discovered not far from the mysterious city. The cave contains stalactites, which are known to form only in the air. That is, the cave was also once on land, but after flooding, which occurred as a result of rising ocean levels or a catastrophic earthquake, it was under water. The age of the stalactites, according to analyses, is at least 10,000 years. A number of skeptics continue to argue that the underwater monument is of natural origin, although there are traces of handwork on it. But in the same region several other underwater stone structures have been discovered, which are not yet so well explored and are waiting to be discovered. But in any case, we are talking about an ancient civilization that knew the art of stone processing and writing, which has not yet been deciphered. Be that as it may, an underwater pyramid off the coast of Yonaguni Island can tell the world a lot about the history of this region. 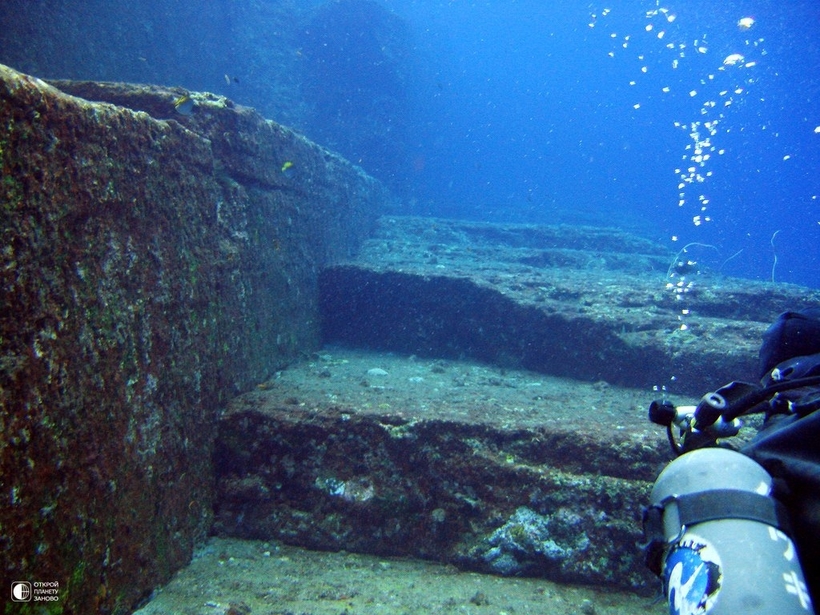 The material is copyright, with reference to the article or site travelask.ru