There is a unique place on Earth with rainbow mountains. Man hasn’t touched the colors China has the Zhangye Danxia National Geopark, which is definitely one of the top most unusual parks in the world. All thanks to the mountains known for their vibrant colors.

The uniqueness of these mountains also lies in the fact that man has not influenced their design in any way. All the colors were formed by nature, and the process of their formation took millions of years.

Zhangye Danxia National Geopark is located in northern China in Gansu province. It covers an area of 510 km². In 2009, it was inscribed on the UNESCO World Heritage List.

Rainbow mountains used to be an ocean About 540 million years ago, Rainbow Geopark was once an ocean which dissolved during the movement of tectonic plates.

The mountains appeared 55 million years ago after the Indian plate collided with the Eurasian plate.

Just as two cars hit an accident, small mountains formed in place of the smooth sandstone. Many of them reach several hundred meters in height. As a result of the collision of the plates, sedimentary rocks that had previously been hidden deep underground were exposed. The relief of Zhangye Danxia is different from ordinary mountains. 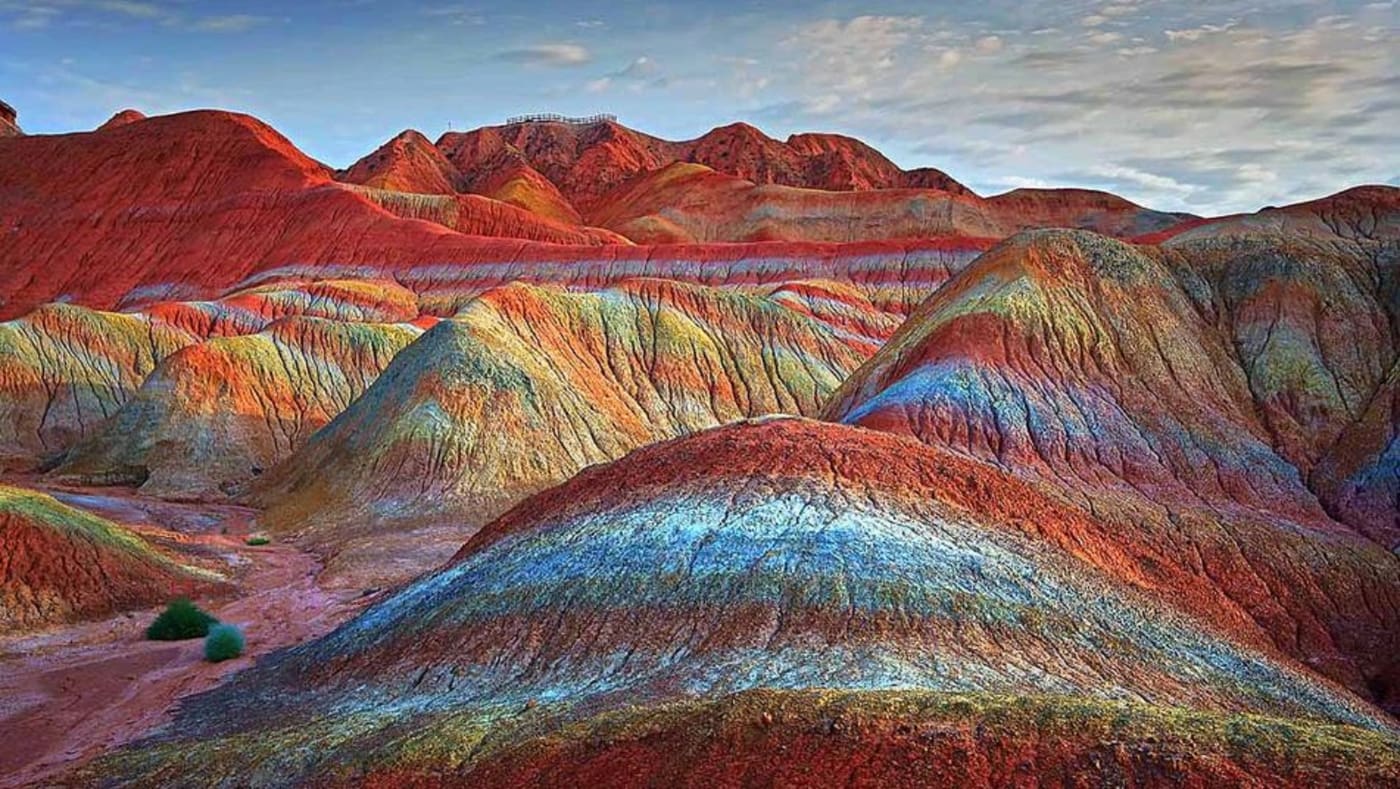 Weathering and erosion have removed the overlying layers and exposed the underlying formations with different mineralogical and chemical compositions.

The topography of the mountains continues to form in modern times. Every ten thousand years the rocks grow about 90 centimeters.

The colors we see today didn’t appear all at once. The process of their formation took about 24 million years.

The primary color is dark red. This is because once there were a lot of rivers in these mountains, and mudstones were deposited at their bottoms.

Later, under the influence of other sedimentary rocks, new colors appeared, among them yellow, green, and gray. Each layer took thousands of years to create.

It’s hard to tell at once if this is a drawing or real nature. Together, all these natural phenomena have formed an unusual color of the mountains, which rather resembles the fantasies of artists, but not the real rocks. Nevertheless, they are real.

Some of the photos would look perfect on the Mac desktop.

The natural landscapes of Danxia Geological Park consist of many caves, grottoes, and ravines. There’s plenty to see.

The most picturesque and most visited areas are Linjie, Bingou, and Sunan.

Today the Rainbow Mountains are one of China’s trademarks. Every year thousands of tourists come to Zhangye Danxia National Geopark, both from China and other countries.

Tours are usually booked in advance because of the great excitement.

Against the backdrop of a large tourist flow, Chinese authorities invested 100 million yuan, or 1.15 billion rubles, in infrastructure development in 2014. This money was used to build new roads, parking lots and viewing platforms. Now the geopark can receive a thousand tourists a day.

China has the Zhangye Danxia National Geopark, which is definitely one of the top most unusual parks in the world. All thanks to the mountains known for their vibrant colors. The uniqueness of these mountains also lies in the fact that man has not influenced their design in any way. All the colors were formed by nature, and the process of their formation took millions of years. Zhangye Danxia National Geopark is located.

If you like mountains and often travel to unusual places, you will be attracted by the colored rocks of Zhangye Danxia. Because of its unusual landscape, the landmark was included in the UNESCO list in 2010. It is worth a visit. 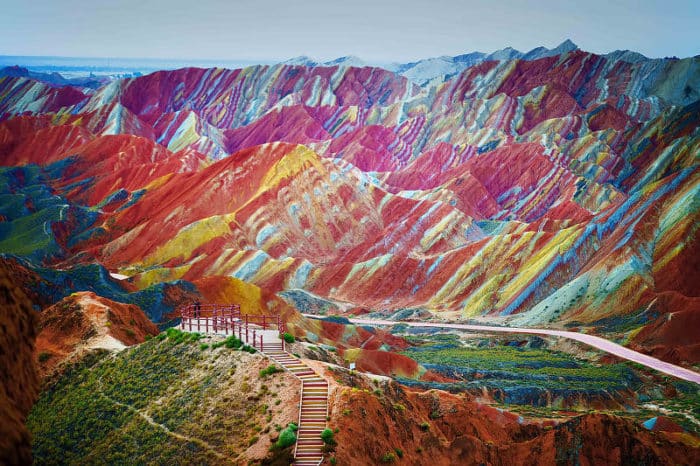 Where are the colored mountains

This interesting geological formation is located in southeastern China. The rocks are located near the city of Zhangye in the foothills of the Qiliangshan Range in the Zhangye Danxia Geological Park. Zhangye city district belongs to Gansu province. The geopark acquired national status in 2011. There are many caves in the colorful hills. The shape of the hills is varied. Part of the Danxia Mountains are covered with vegetation. And this adds new colors to the landscape. There are hotels and hostels in Zhangye. It is better to book a room in advance, as there are not many people who speak English in the village. Therefore, it will not be easy to find accommodation upon arrival. There are other attractions in the vicinity of the town, the inspection of which can also be included in the trip.

Why the mountains are rainbow.

In the photo, we will see a mountain range, which seems to be sprayed with colors. The impression arises as if an artist has worked with it. How did such an unusual landscape form? The history of the formation began many years ago. The area used to be the base of a large body of water. Then the liquid in the body of water evaporated and the bottom sediments became solid. The Denxia formation contains red sandstone and sedimentary rocks of the so-called Cretaceous period. They contain iridium. This is a chemical element not often found on Earth. The variation in color is due to the oxidation of the sandstone and some other rocks. Different layers have changed in their own way under the influence of physical processes. Over millions of years, a layer of about 3700 meters of red sandstone appeared, and on top of that a layer of 1300 meters formed during the Cretaceous Period. This layer formed the tops of the Dunkia Mountains. The bizarre landscape is the result of crustal movement, weathering and erosion.

READ
Aogashima is an island and an active inhabited volcano. Japan 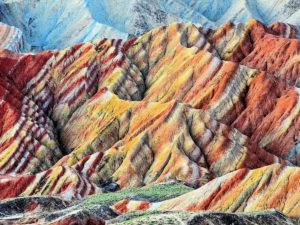 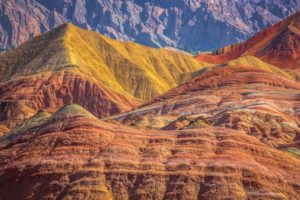 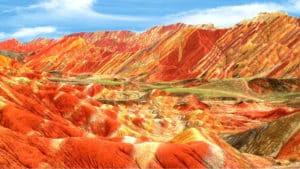 How to get to the colorful mountains

There are several ways to reach the colorful peaks:

By train from Beijing or other cities in China to Zhangye. The distance from Beijing to the destination is approximately 1,400 km.

By plane. The international airport is located about 400 km from the park in Lanzhou County, the administrative center of Gansu Province. The cities of Zhangye and Lanzhou are connected by rail. 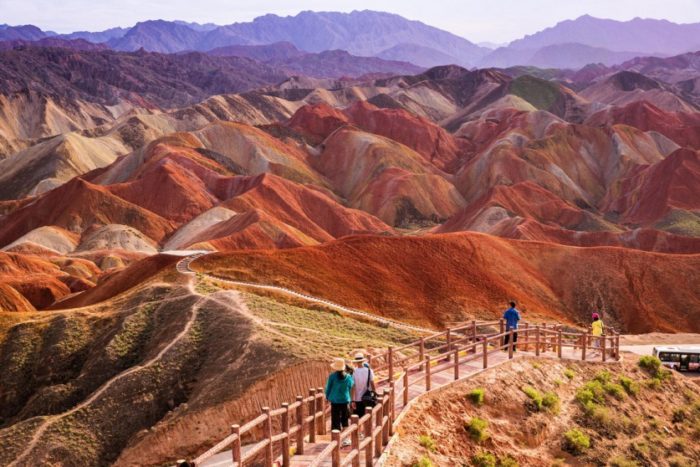 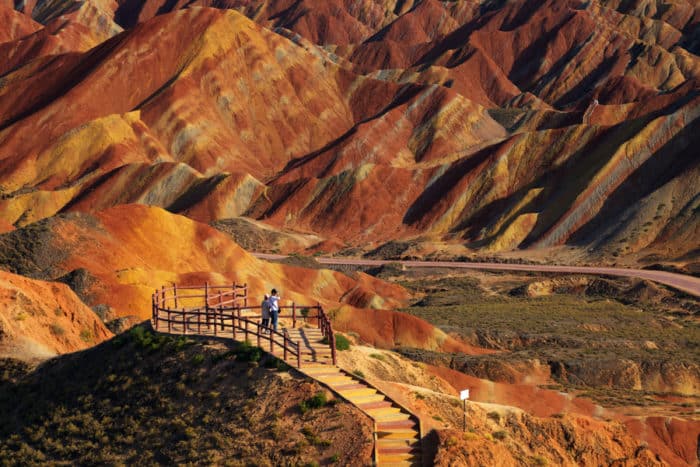 By intercity bus from localities in China

Once you have arrived in Zhangye, you can choose the most appropriate way to get to the geopark. It is convenient to take a cab. You can ask the cab driver to wait until the end of the tour and leave on the same vehicle.

The popularity of the rocks continues to grow. Crowds of tourists come there. However, you can not explore the hills on your own. It is necessary to pay for the entrance ticket and for the tour. Trails are laid out for tourists, organized safe viewing platforms. On the territory of the geological park Denxia runs a bus. Groups are formed at the main entrance. The bus will stop at four scenic overlooks. You will be able to get off and tour them. The colorful hills will appear in all their glory at sunrise and sunset. 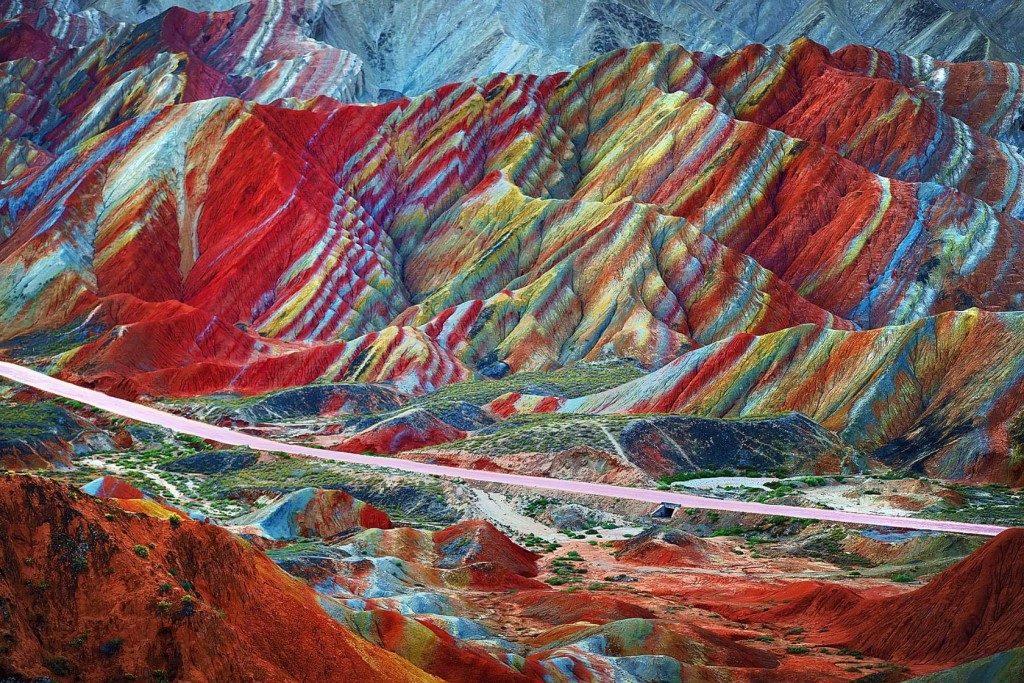 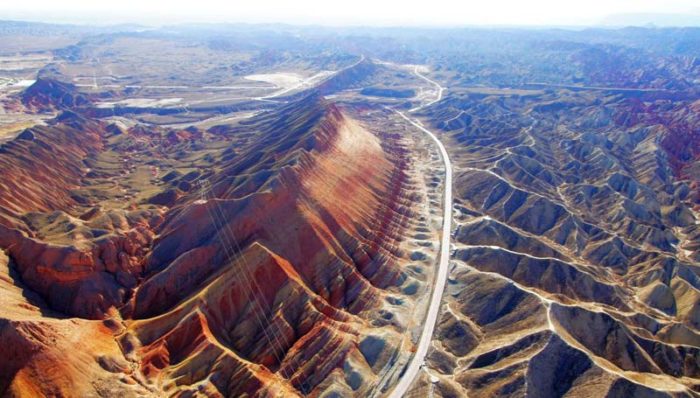 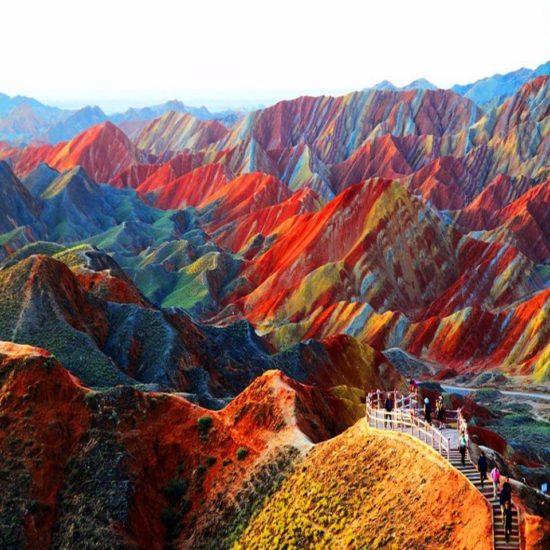 Come here for the enthusiasm. A few days spent here will fill you with energy for a long time. The best time to visit Zhangye Danxia Geopark is from June to September. It is then that you can fully enjoy the Chinese attraction. It is a beautiful trip and a lot of memories and unforgettable photos.